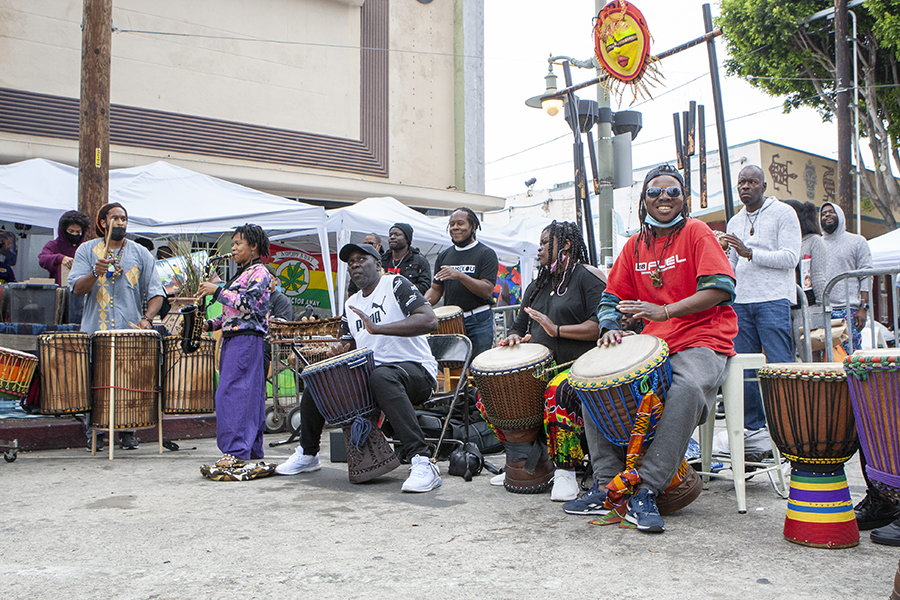 New permit requirements in the city of Los Angeles have made it difficult for street vendors to sell goods in the village.  Local organizers are working to obtain a long-term permit.

For many years the African drum circles and Black street vendors have been a way of life in Leimert Park Village along Degnan Boulevard between 43rd Place and 43rd Street.  The village is one of the most prominent Black cultural spaces in Los Angeles, and it is a symbol of Black life in this city.

“Leimert Park has been a meeting place for melanated people at least since the early ‘80s, if not into the ‘70s,” said Ezell McDowell, who participates in the drum circles.

The drum circles feature musical styles from across the African diaspora, with drummers coming from various parts of Africa, Latin America, the Caribbean islands, and locally.  McDowell points out that a marketplace typically follows a cultural event like this.  He has also seen the evolution of this cultural space over the years.  He spoke about the importance of this weekend event, and how the drum circle and marketplace are intertwined. 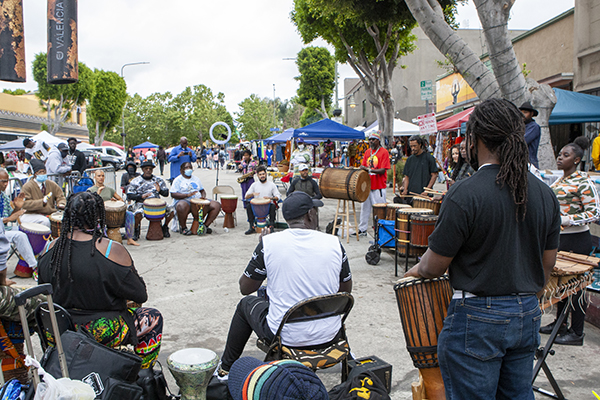 “We have created something where we’re meeting our needs the ways that our needs need to be met in terms of unification; in terms of having a meeting place,” he said.  “As a culture, we operate in certain ways.  So when we have events that are in alignment with our culture, that’s what gives our events power.”

The marketplace features Afrocentric products that are hard to find at mainstream retail stores.

“There’s such a variety,” said Jenn Laurent, who is a representative of the African Marketplace and Drum Circle Farmers’ Market.  “If you start with our food vendors, we have vendors who do Jamaican food, vegan food, and other cultural food like Belizean food.  There’s a barbecue food vendor.  As far as non-food products, you can get everything from clothing to cultural items like African art and statues.  You can get cultural clothing.”

With Black communities in Los Angeles shrinking because of gentrification, this historically informal event has an additional importance to local Black residents.

“That’s part of the reason why we wanted to hold this space for the vendors,” Laurent said.  “Because of the importance and the historical significances of Black people in L.A.  This is one of the last spaces that we’re holding and that we can call our own.”

“Many people have come to us and told us how important the drum circle is,” McDowell said.  “It’s important that we continue our culture through drumming and through the marketplace as well.  Because these are things that over time have been chipped away from our culture in so many different ways.

“As far as drum circles and having vendors there, we’ve been doing that uninterrupted for at least 25 years.  What we have here is very special.” 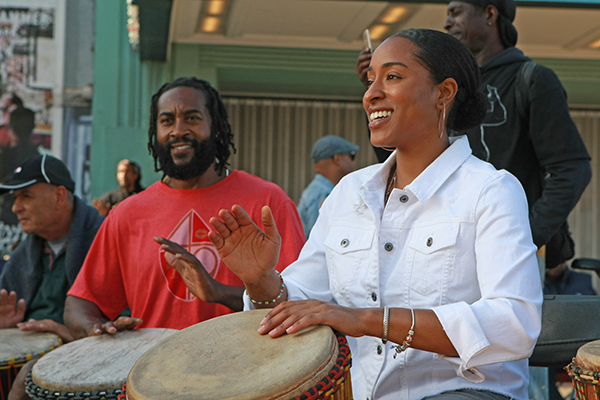 While the drum circle does not need a permit and will be able to continue uninterrupted, the marketplace is in jeopardy because of permit issues.  Historically, street vending in Los Angeles has been illegal, but vendors in Leimert Park Village were not bothered much by law enforcement over the years.  Street vending was decriminalized in Los Angeles County in 2017.  In November of 2018, the Los Angeles City Council approved an ordinance which legalizes sidewalk vending, and the city started issuing vending permits in early 2020, just before the COVID-19 pandemic hit.

With the new vending ordinance and permit requirements, the Los Angeles Bureau of Street Services started to patrol the city, ensuring that street vendors are in compliance.  This has impacted Leimert Park Village.

In the beginning stages, the Bureau of Street Services was not issuing financial citations.  Instead their goal was to educate street vendors on the rules in what was considered a grace period.  But at some point that grace period was going to come to an end, and vendors would receive financial citations and be shut down if they were not in compliance.  In Leimert Park Village, this led to the formal creation of the African Marketplace and Drum Circle.

“The African Market Place and Drum Circle came out of necessity,” Laurent said.  “Street vending has always been a part of the culture in the village.  It was more informal.  It was based around culture, community, spirituality, and it was attached to the meaning of the drum circles.”

Laurent is the executive director of LA Legal Assistant, and her group has been helping the vendors obtain the proper permits.

“What’s happened over the past year to two years is that due to the Metro Crenshaw train station opening, the re-opening of the Vision Theater, and the Olympics, there have been some fears that the street vendors and the drum circles would be displaced,” she said.  “We’ve seen signs of gentrification all throughout South Central, so that also added to the fears that the street vendors would be displaced.”

Laurent points out that this is a city-wide issue.  Latino communities where street vending happens on a daily basis have been fighting to legalize and regulate street vending for years.  With the new regulations, Laurent, along with volunteers, helped street vendors in Leimert Park apply for the proper permits.  They had a difficult time obtaining permits for food vendors, which have a higher level of scrutiny because they are serving food.

Laurent also pointed out that local business owners and residents in and around Leimert Park Village had complaints about the trash left behind and traffic issues.  One of the traffic concerns was a safety issue, because moving cars and people would occupy the same pathways, and some of the vendors were setting up their tables in parking spaces.  Some merchants along Degnan Boulevard also had issues with vendors setting up tables in front of the merchant’s store.  Leimert Park essentially became a free-for-all for the vendors, and the event needed to be regulated.

According to a representative of Councilmemer Mark Ridley-Thomas’ office, they helped Laurent and the street vendors obtain a farmers’ market permit, which would allow them to close off Degnan Boulevard and 43rd Place on Sundays, which would solve the traffic safety issue, and it would allow the food vendors to obtain permits.  The first official African Marketplace and Drum Circle Farmers’ Market took place on April 18, 2021.  According to Laurent, they were given good reviews by parking enforcement, law enforcement, and the fire department.  She said that they were told that they needed to address a few issues, such as blocking fire lanes, and having emergency medical technicians on site. 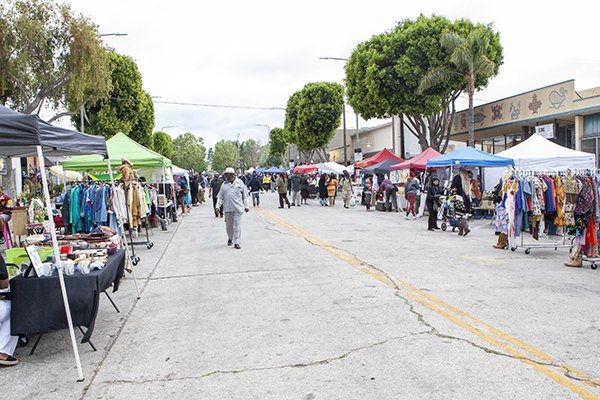 Two days before the second farmers’ market was to be held on April 25, Laurent was informed that their permit was being revoked by the Bureau of Street Services.

After conversations with Councilmember Ridley-Thomas’ office, the permit was reinstated.

“But it would not be reinstated for the full year, which it was (originally) issued for,” Laurent said.  “Most farmers’ market permits are issued on an annual basis.  Our initial permit that we got in writing says that it was approved for a one year period.  The councilmembers’ office said that they would reinstate the permit for two months instead of one year.  And then we were told that we’d have to fill out a special events application as opposed to a farmers’ market application.”

According to a representative of Councilmember Ridley-Thomas’ office, the permit is set to expire at the end of the city’s fiscal year, which ends on June 30.  The marketplace will be allowed to continue while the organizers work out the permit issue before the new fiscal year.  Laurent said that she is not clear what the city is looking for to extend the permit.

Councilmember Ridley-Thomas has 12 staff members who work with issues and on community programs within Leimert Park, and he has a plan to invest $35-40 million of resources to Leimert Park by the end of 2022.

“As the Councilmember for the 10th Council District – and longtime resident of Leimert Park – I have a deep appreciation for the historic and cultural significance of the village,” he said.  “In no small part, I see my role as working to ensure that the village lives up to its full potential, and that it is clean and welcoming for all members of our community to enjoy.  This means investing in improvements to the plaza, bringing back the crown jewel of the village – the iconic Vision Theater – facilitating street improvements, and supporting small businesses and local commerce including the marketplace for the benefit of local vendors and visitors alike.  My office is committed to working with the businesses, festivals and events taking place in the village to ensure they operate safely and professionally, and so that we hold true to the standard and potential of what Leimert Park can and should be.  We deserve nothing less.”