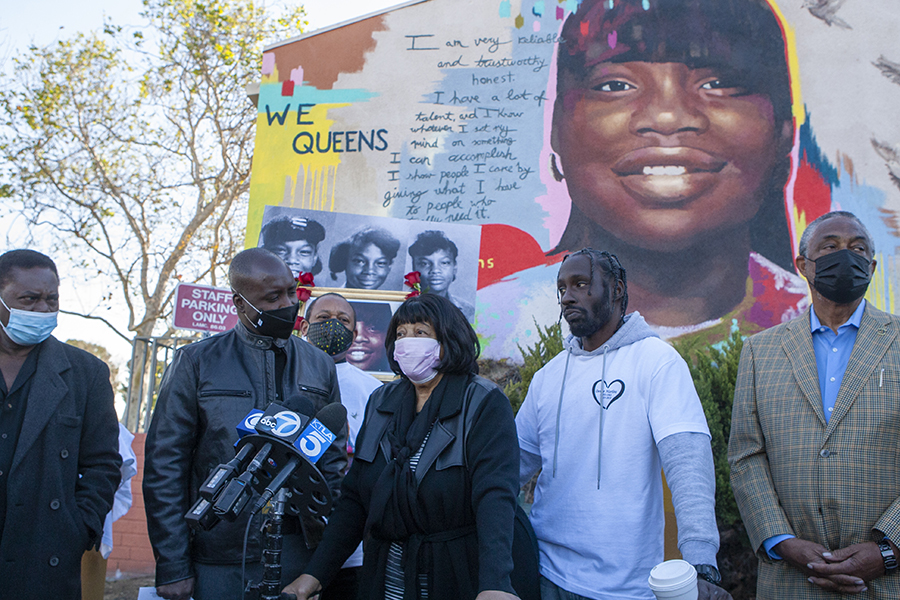 Latasha Harlins’ grandmother, Ruth Harlins, speaks to the media in front of a mural that honors her granddaughter. Photo by Jason Lewis

A South Los Angeles playground has been renamed in honor of Harlins, and Netflix released a documentary about her life.

The playground at Algin Sutton Recreation Center in South Los Angeles was renamed Latasha Harlins Playground in honor of it being the 30th anniversary of her passing.

Harlins’ life was taken over a $1.79 bottle of orange juice at Empire Liquor on March 16, 1991.  The liquor store was located at the intersection of Figueroa Street and 91st Street.  The owner, Soon Ja Du, wrongfully assumed that Harlins was attempting to steal the bottle of orange juice, and after a physical altercation, she shot Harlins in the back of the head. The 15-year-old passed away instantly, with the two dollars still in her hand.  Police later confirmed that Harlins had not attempted to shoplift.

Harlins’ death was 13 days after the beating of Rodney King and only added fuel to the flames of Black pain and anger in Los Angeles which caused the Los Angeles Uprising of 1992.  During the uprising, Empire Liquor was burned and it never reopened.  Regardless of the jury suggesting that Du serve 16 years in prison, the maximum sentence for being guilty of voluntary manslaughter, the judge granted her with five years of probation, 400 hours of community service, and $500 fine.

Netflix premiered A Love Song For Latasha, a short documentary focusing on the life Harlins had, in September of 2020.  The first-ever mural of Harlins was revealed on January 1 of this year, on what would have been her 45th birthday.  The mural was painted by artist Victoria Cassinova.

On March 16 family, friends, and community members including Councilmember Marqueece Harris-Dawson gathered as it announced that the park’s playground on Hoover Avenue and 88th Street would be renamed after Harlins.  It is the same park where her mural is located, and the park where Harlins played at.

The mural, playground, and documentary will ensure that Harlin’s story is not forgotten.

“When they see her face, they see her name, I want them to be able to Google her and be able to learn about what happened to her in their community,” said Shinese Harlins, Latasha Harlins’ cousin.

Shinese Harlins explained that Latasha’s story “got good exposure to what happened to her just like Travon Martin, Emmitt Till, and Rodney King, but it all vanished after a time, so we always have to say her name to keep her name alive because again she died with two dollars in her hand for a bottle of orange juice.”