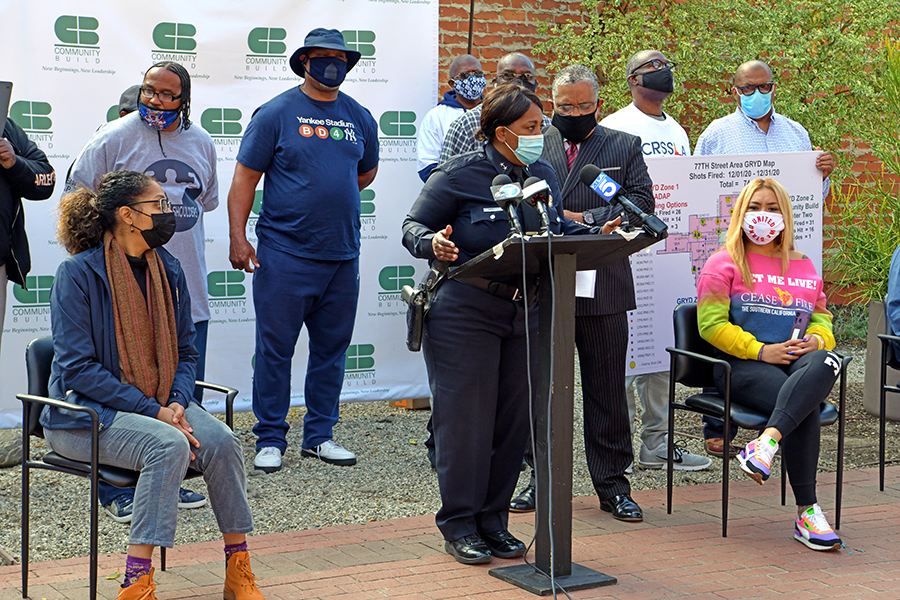 Programs such as Community Build and Reclaiming America’s Communities through Empowerment could have a greater impact if the programs received more funding.

Violent crimes have increased at an alarming rate this year.  There were more deaths from violent crimes in South Los Angeles over the first three weeks of 2021 than there were in the entire year of 2020.  This prompted an emergency press conference at Community Build in Leimert Park Village to discuss solutions to this problem.

California Assemblymember Sydney Kamlager expressed her frustration as she discussed the rise in violent crime, and she pointed out that there is a need for more funding for organizations which prevent children from joining gangs, and which help keep the peace between the gangs.

Kamlager authored the CRISIS Act (AB 2054) in 2020, but it was vetoed by Governor Gavin Newsom.  The bill would have called for $16 million in funding for non-profit community-based emergency response organizations that specialize in de-escalation, such as gang intervention programs.

“I’m hoping that it will be passed and signed into law this year so that the state can do its part to fund groups who have the expertise and the credibility in their communities to help stop some of the traumas that are happening,” she said.

There has been an outcry from local community activists to get more funding for gang prevention and gang intervention programs, which tend to be underfunded.

“Many of these groups are fundraising or having folks do this work on a volunteer basis,” Kamlager said.  “They’re fundraising to keep the lights on.  They’re either fundraising to pay one person to do a whole bunch of things, or to pay a few people for part-time work.  We need to pay people to help them do the real, the important, and the heavy work; which is connecting on a human level to folks in South L.A.”

One of the several underfunded programs is R.A.C.E. (Reclaiming America’s Communities through Empowerment).

“We could do a lot with more money,” said Reynaldo Reaser, executive director of R.A.C.E.  “As a non-profit organization, we have a small budget, and we’re way below the budget of what we need to be effective.  We’ve already shown that we can do this work with the volunteers and resources that we have now, but we’re running really thin.  I’m wearing three or four different hats, trying to take care of the organization and run programs.”

Even with a small staff of mostly volunteers and part-time workers, R.A.C.E. has managed to create programs to keep children out of gangs, give gang members alternatives so that they can leave gangs, and they have served as intermediaries between local gangs to prevent violence.  But finances have limited their abilities to bring about positive changes in local Black communities.

“If we had the resources to employ more individuals, we could spread the workload out,” Reaser said.  “We could be more effective and reach more people.  Other neighborhoods are suffering just as ours.  We want to be able to train people in other areas so that we could expand.”

Community Build also has an impactful gang prevention and intervention program.  The prevention side of the program focuses on children ages 10-15 years old who are at risk of joining a gang.

Community Build has partnerships with other local organizations that have activities that pull children away from negative activities.  Community Build pays for children to participate in sports programs at Jackie Robinson Sports Complex, Jim Gilliam Recreation Center, and other local parks; dance lessons at Debbie Allen Dance Academy at the Baldwin Hills Crenshaw Plaza; and they have martial arts classes at Community Build.

These programs take up a child’s time so that he or she will not be attracted to gang activities, and these programs teach children how to make better choices in life.

“Once the youth is no longer a part of our program, the youth and family have an understanding of where they live, what positive interactions that they can have in the community, and hopefully with the structure of the program’s services, they’re able to make better decisions,” said Kathi Houston-Berryman, vice president of gang prevention programs at Community Build.

This program also works with parents who may have been raised in a similar situation that their children are being raised in.

“Sometimes parents were never parented,” Houston-Berryman said.  “Nobody has ever given them a roadmap on how to parent a youth.  We teach parents how to talk to a teacher; how to deal with a child who is failing math.  How we can support that with a tutor.”

“The ex-gang members understand the life, the romance, all of that,” Houston-Berryman said.  “The ex-gang members know what it’s like and what pulls children into gangs.  One thing that the intervention staff at Community Build has done is build a structure.  They promote healthy activities and they teach how to build healthier peer relationships.  The ex-gang members have those skill sets.  They’ve been there.”

One major issue that a lot of people overlook is that children who are homeless may be attracted to gangs as they search for a family structure.

“Some of these individuals are sleeping on couches,” Houston-Berryman said.  “They’re kind of like nomads in this community.  Case managers work with them to see if they can stabilize their home life.”

Community Build and other gang prevention and intervention programs are working to break a cycle of children seeing family members going to prison.

“The sad thing about our community is that for so long, people think that it’s normal to go to jail,” Houston-Berryman said.  “When mom and dad go to jail, we have grandparents trying to raise these kids.  Sometimes they don’t have the skillset to stop the chain of generational incarceration.”

Community Build has partnerships with the Stentorians of Los Angeles City and the Los Angeles County Stentorians, which are Black firefighters unions; construction training programs; and they teach children and young adults how to create a resume, fill out a job application, and prepare for a job interview.

“We have a strong employment focus,” Houston-Berryman said.  “That can be summer jobs, jobs in construction.  The goal is to pull them away from the gang.  There has to be something in place, which can be school or employment.  If you can get that paycheck, you can have honest earning money that’s yours.  You learn how to financially take care of yourself.”