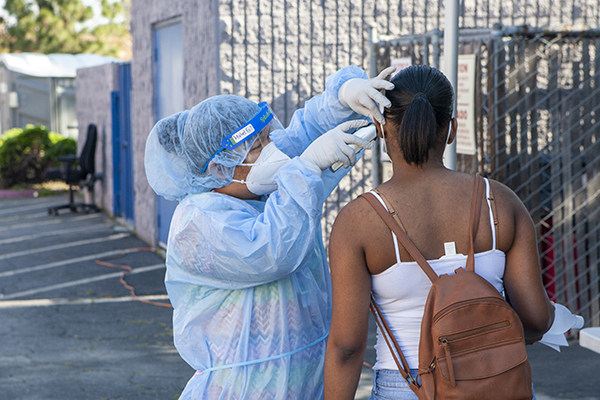 Patients’ temperatures are taken before they enter the Watts Healthcare Corporation. Photos by Jason Lewis

Initially many Black people believed that the coronavirus would not harm Black communities, but poor health and a lack of access to quality heath care has led to higher death rates among Black people.

There has been a lot of hysteria going through Black communities surrounding the coronavirus with a lot of misinformation being shared on social media.  In the early stages of the COVID-19 pandemic, many Black people shared bogus information that people of African descent could not get the virus, or that the virus would not make it to Black communities.

That logic was quickly proved false when statistics came out that showed that Black communities not only had COVID-19 cases, the death rate was higher among African Americans.

“I don’t think that we should be shocked by that, because if you take any health issue-- diabetes, hypertension, heart disease-- and you look at the health status of White people compared to Black folks, all you have to do is double the numbers in terms of what we get.  There’s twice as many Black folks in terms of diabetes, hypertension, lung disease, etc.,” said Rep. Karen Bass in an interview on the Roland Martin Unfiltered Daily Digital Show.  “So that makes us at greater risk for COVID.”

The death rate for COVID-19 patients who have pre-existing medial issues is dramatically higher, which is why it has hit Black communities harder.  In Louisiana, where 70 percent of the deaths were Black, 66 percent of the people who died had hypertension, 43 percent had diabetes, and 25 percent had chronic kidney disease.  All of these preventable illnesses affect Black communities more than other races.

For many health care providers, these numbers are not a surprise at all.

In the early stages of this virus, many Black people had a false sense of security.

“In the beginning for our community it was thought that we were lower risk because our community doesn’t tend to travel to the parts of the world that were being impacted and most visible in the news,” said Dr. Cozzette Lyons-Jones, MD, Chief Physician at Watts Healthcare Corporation and president-elect of the Association of Black Women Physicians.  “You’re talking about Asian countries.  In many of our communities, we don’t connect to those parts of the world.  So we thought that we were at a lower risk.”

The initial messaging coming from the federal government, namely President Donald Trump, added to the hysteria.  Trump originally denied the severity of the virus, and outside of putting restrictions on people traveling from China to the U.S., he did not put in impactful measures to counteract the virus.  Instead he left it up to state governors to create social distancing policies.  After weeks of trying to keep the nation open, Trump finally gave into pressures from within his own administration and put out social distancing guidelines.

“We would have been in a better position if the messaging had gone out sooner,” Lyons-Jones said.  “The messaging was confusing because they were comparing this virus so much to influenza.  They were likening it to the flu virus and the fact that more people had died from the flu but nobody is going crazy, shutting down jobs, or social distancing.   So why are we doing this for this little virus here?  I think that did us a disservice as a country, and we were unable to get ahead of it like we saw in South Korea and other countries that were more rigid.”

Lyons-Jones points out that other countries have different forms of government that can control the movement of the population, where in the United States, people have more freedoms.

Lyons-Jones echoes the sentiments of Rep. Bass and Dr. Releford.

“Our baseline health is poor, so we’re at higher risk of dying from it (COVID-19),” she said.  “As a collective we have the worst health outcomes across the board.  If you’re looking at diabetes or cardiovascular disease, any measure that we look at, nine times out of 10, African Americans are leading the way unfortunately.  So the health care disparities are glaring.”

“Even though we may not travel to the countries as much as other groups, at the end of the day, if it hits one person in our community, it’s going to spread like rapid fire,” Lyons-Jones said.

Many people have been told to work from home, but only about 30 percent of the country has jobs that will allow them to do that.  For Black people, only about 18 percent have those abilities.

“We’re the essential workers and many of us work in the service industry, so we have to get on those busses and trains, packed together.” Lyons-Jones said.  “Now we have to continue working during a pandemic.  Many of us do not have the luxury to play it safe.”

This pandemic has put a spotlight on the health care disparities that have negatively affected Black communities for decades in the U.S.

“Racism is a key player in this,” Lyons-Jones said.  “Racism is a driver of what we’re seeing now.  This pandemic has taken the lid off of it.  Implicit bias is real.  It’s alive and well.  It colors who has access to what.”

Many government policies over the last century have made it extremely difficult for Black communities to thrive on similar levels of White communities, as politicians have suppressed education, employment, and business opportunities from Black communities.

For more information about the Black Barbershop Health Outreach Program, visit www.blackbarbershop.org and follow them on social media.