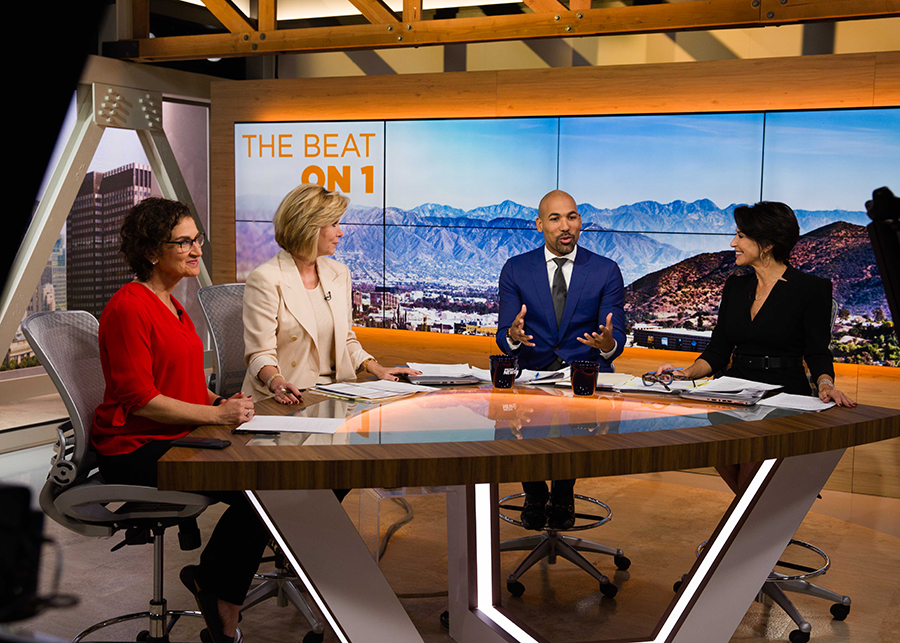 Spectrum News 1 SoCal took an ambitious path when they launched a year ago.  While many media outlets, whether it’s television, print, or online, adhere to the motto, “if it bleeds it leads,” Spectrum News 1 has focused on the untold stories that reside in the various communities of the greater Los Angeles area.  And many of those stories are extremely positive.  They are proving that good news can actually sell.

Many local news shows start their broadcasts with car chases, disasters, and crime reports, while Spectrum News 1 stories are typically profiles of local people, small businesses, and community organizations that are impacting their neighborhoods.  A lot of these stories are ignored by major media outlets.

“One of the very first things that we did was think about how are the communities being underserved by local news,” said Cater Lee, Spectrum Network’s vice president for news and content.  “Our first feeling was that spot news (news of events reported as they occur) is a very reactive model, and that’s what most local news has turned in to.  They take the helicopter shot of the car chase that’s happening right now.  Sometimes that drives ratings, but does that drive fans?  Does it really serve the communities?  Is that really reflecting the life that we all have everyday in Southern California?

“What people weren’t seeing were those hyperlocal stories about the people, and the way that we live day-to-day.  And that includes the challenges, because it’s not all good news.  We try to put a solution focus on the news.”

Showcasing local stories has been successful for the network ratings wise.  In September of this year, among all networks available to Spectrum subscribers, Spectrum News 1’s viewership ranked 2nd for full day viewership.  And also among subscribers, the network’s original programs in primetime, on average, record more viewership than Anderson Cooper 360 on CNN, The Rachel Maddow Show on MSNBC, Tucker Carlson Tonight on FOX News, and several dramas on the local affiliates.  The network was nominated for three Emmys and 11 L.A. Press Club awards.

Spectrum News 1 has produced several stories in South Los Angeles and Inglewood.  They covered the TEC Leimert conference, the Kwanzaa Parade along Crenshaw Boulevard, the King Fest in Inglewood, the South L.A. Wine Club, the presidential debate parties at the Metaphor Club in Leimert Park, and many other positive stories within Black communities of Los Angeles.  They have also published stories on issues that negatively impact Black communities, such as the homelessness issues throughout the greater Los Angeles area and the rent hikes in Inglewood surrounding the NFL stadium.

While there is crime and negative stories in all communities of the greater Los Angeles area, Spectrum News 1 does not highlight those stories, even though negative stories can bring in high ratings.

“Is any of that relative?” asked Scott Warren, Spectrum News 1 news director.  “How many of those things do you see, or happen to you every day?  But if you look at a television station, you feel like it’s happening everywhere all of the time.  What we wanted to do was to get into the communities themselves and find out what they are dealing with on a day-in, day-out basis, and how we can celebrate that or solve it; getting those stories from people in their communities, their voices, and finding out what concerns them.  If you’re (other news networks) spending all of your time running around chasing shootings, fires, and car chases, you won’t have time to go out and find stories that people are really interested in, or the things that are affecting them the most.”

Spectrum News 1 can effectively cover the many communities in the greater Los Angeles area because most of their reporters are either from or live near the communities that they are covering.  That helped the network with their highest rated story to date, which was the death of rapper and South Los Angeles icon Nipsey Hussle.

“We took our reporters from those communities, and they took the lead,” Warren said.  “They told the Nipsey Hussle story from the inside out.  They told what he meant to the community; what he’d done for the community; how he’d help the community.  But they also told the reality side of it; how he was involved with gangs, what he was doing with gangs, how he started and how he ended.  So we were able to get a context on that story while everybody else went from the outside in looking at it; naming celebrities and all of the superficial stuff instead of actually getting in there and understanding the fabric of that community, and how Nipsey was a part of that fabric.”

Timothy Parker is one of the South Los Angeles and Inglewood reporters, and he produced the segments on the Metaphor Club and on a flea market in Leimert Park.

“In South Los Angeles and Inglewood, people take pride in where they live,” Parker said.  “I’ve never seen so many people care about setting up shop where they’re from.  I did a story on a woman who opened a clothing shop in Inglewood.  She had the store somewhere else, but she wanted to come back to Inglewood because of what’s going to become gentrified with the new stadium.  She wanted to own a piece of her neighborhood.”

“Here at News 1, we’re more local than local if that’s possible,” Robert said.  “Our term here is ‘hyperlocal,’ so you’ll see stories here that you may not traditionally see on other local news outlets.  We’re not just covering the community, but we’re in the community.  We’re walking hand in hand with the stakeholders and residents to make sure that their voices are being heard and that we’re telling stories in a way that’s authentic and true to what’s actually going on.”