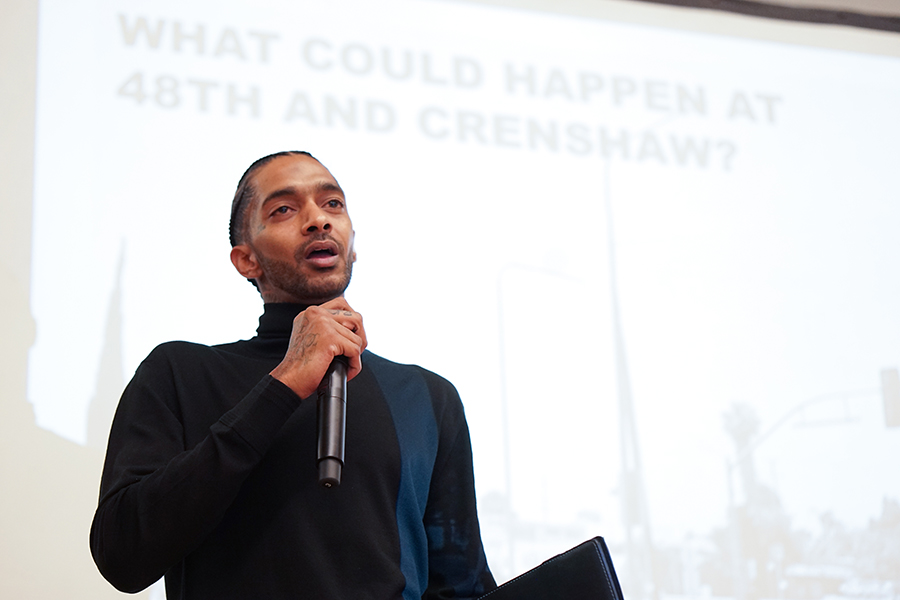 Nipsey Hussle financially invested in the South Los Angeles communities that he was from. Photo by Leroy Hamilton

While gentrification is impacting South Los Angeles and Inglewood, Nipsey Hussle was a symbol of Black people investing in their own communities. 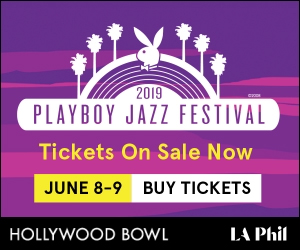 It’s important for people to understand why it’s OK for Nipsey Hussle to be seen as a hero in South Los Angeles.  But we have to get a few things straight.

Don’t get distracted by the fact that he was a Rollin’ 60s Crip; people join gangs because they seek a sense of community in a society that has discarded them.  Don’t get distracted by the tattoos, because when you’re not interested in fitting into a society that has discarded you, you are free to express yourself in your own way.  And don’t let that little bit of guilty feeling invade your brain, the one that says, “Well, what do you expect? He was a gang member, so he sorta deserved it.”  Nah kid, Nipsey was from South L.A. (formerly South Central), just like me, a college educated and so-called respectable husband and father in the neighborhood, and he deserves the same respect that comes from being a product of our rich community.

Because I want you to see Nipsey Hussle through my prism, as he’s not that much different than me. Before we moved to Inglewood when I was six, we lived in the Rollin’ 60s, right next to the old Langendorf Bakery factory.  It was so ubiquitous to my childhood, that even today, over 40 years later, whenever I smell baked goods, it always brings up those memories of living on Cimarron and Gage, right in the heart of those notorious Rollin’ 60s blocks.  Twenty years apart in age, I got out, but Nipsey didn’t.

That said, in some ways, Nipsey was the American dream.  Started from the bottom, not with some “small” million dollar loan from his daddy, but the hard way.  He developed his musical talent and sold mixtapes on the streets.  Worked in the neighborhood.  Went to school in the neighborhood.  Got his first job in the neighborhood.  If you’re from around here, probably got your order for fish from him at the Bayou Grille in Inglewood.

Then he blew up.  Got a Grammy nomination.  That should be celebrated.  Made mistakes.  Those, he acknowledged.  But he also did what we all want folks who come from South L.A. to do.  He stayed in the neighborhood.

I’m one of the owners of The Metaphor Club, a creative co-working space on Crenshaw Boulevard, right in the heart of South L.A.  But about six months prior to our opening, Nipsey helped create Vector90, a co-working space for young black folks interested in STEM.  And he put it in that old Langendorf Bakery factory, smack dab in the Rollin’ 60s, about 10 blocks away from our Metaphor Club.

He transformed the space.  Created programming to provide opportunities he didn’t have, for people who looked just like him.  You know, the things that would make a young Black kid living in the Rollin’ 60s choose coding over slinging because you finally got a choice like kids in other neighborhoods.

But he wasn’t done yet.  He then took an old fish market a few blocks over, right on Crenshaw and Slauson, renovated it and installed his clothing line, Marathon, the same spot where he was murdered.
And that is a tragedy.

Out here, in the last remnants of a disappearing Black Los Angeles, when we talk about stopping gentrification, it’s not just about getting pissed over clueless White people jogging around South L.A. with tiny dogs and demanding stuff.  It’s not just throwing up a middle finger at people who tell us that our area is an ‘undiscovered gem.” Nah, that’s just the stuff that annoys us.

The fight against gentrification is more about hoping that South L.A., denigrated for so long as the bastion of crime because it’s populated by Black people who look like Nipsey and me, will some day be a safe place for the Black people who both survive and thrive in it, and also want to be alive in it.

Nipsey Hussle is a different generation than me.  But we are the same.  From the same neighborhood.  With the same mentality about loving your own people by investing in your own people.  And for that, I feel fine calling him a hero to this South Los Angeles community. 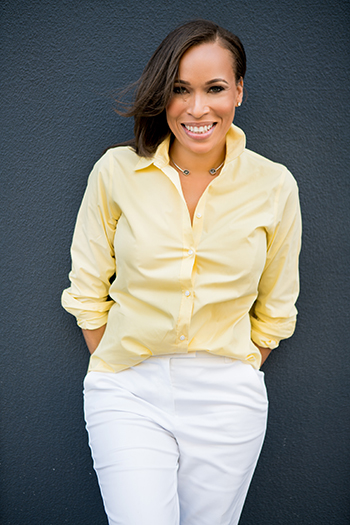 My heart cries for his loved ones, friends and community.  I’m a community native, so Nipsey’s passing hits hard.  I grew up in the district, right on 63rd and Crenshaw, attended Hyde Park Elementary, Horace Mann Junior High and Crenshaw High School.  I know the struggles that you have to overcome to not only survive, but be a positive influence, a light, and see something better.

I’m a huge fan of Nipsey’s music and just as importantly connected with ideas on ownership, technology, doing the work in our community.  I felt like he was a kindred spirit.  His vibe always seemed positive.  In my mind if you’re a person of color, able to navigate the 80’s in the hood, still maintain a good spirit, you’re unstoppable.  He can’t be stopped.  He left a legacy beyond his years on this earth that will serve as inspiration for many.  He told us he was taking his victory lap, but the marathon continues by us investing in our community, educating ourselves and unlocking our collective power.  Pulling each other up as we go.

Personally I educate my clients about property ownership, creating wealth through buying/selling real estate as well as working with TEC Leimert, which aims to bridge the digital divide in technology and entertainment.  That’s my lane and how I run my race…just some of the ways I contribute to my community. The truth is, Black homeownership is declining and that doesn’t sit well with me.  We need to purchase the building we run our businesses out of.  That’s what Nipsey was doing.  I can work anywhere, but like Nipsey, I’m proud to work in the community I grew up in and hope we can maintain and encourage the cultural connectivity and continue to elevate our city.

After the tears are dried, I hope we see we have work to do.  I hope we’re inspired by his good deeds and the good energy he put out.  I hope those that looked up to him and loved him ask themselves, what would he want them to do next? 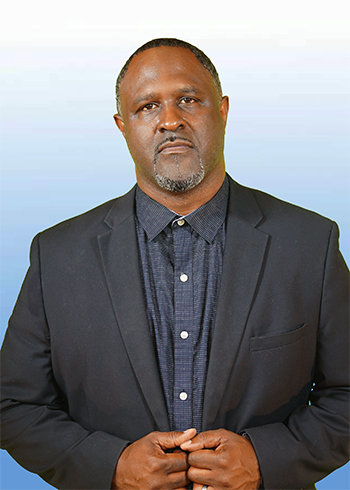 Nipsey’s death is a tough one to absorb.  As a born and bred South LA/Watts resident, having grown up in Watts in the 80s in the midst of the rise of gang violence, being board chair of BCIF, and an avid hip hopper ... Nipsey’s senseless, untimely passing resonates with me on many levels.  It’s a tremendous loss, one that should NOT have happened!

Nipsey started in the hood, was on an unhealthy path early on in his life but was blessed with vision to know he had greater purpose.  I salute and respect his “hussle,” his passion to uplift his community, increase awareness through his platform, and put his resources behind his words.  He was laser focused on taking the bull by the horns and making things happen, not sitting idly and waiting for things to happen either to us, or be done by others for us.  Those traits are directly aligned with the spirit and mission of BCIF.

One of the best ways we can honor his spirit is by being proactive in leveraging our economic power to bring change and healthier outcomes for the Black community, in L.A. and beyond.  We lift Nipsey, his family, and his loved ones up in prayer. 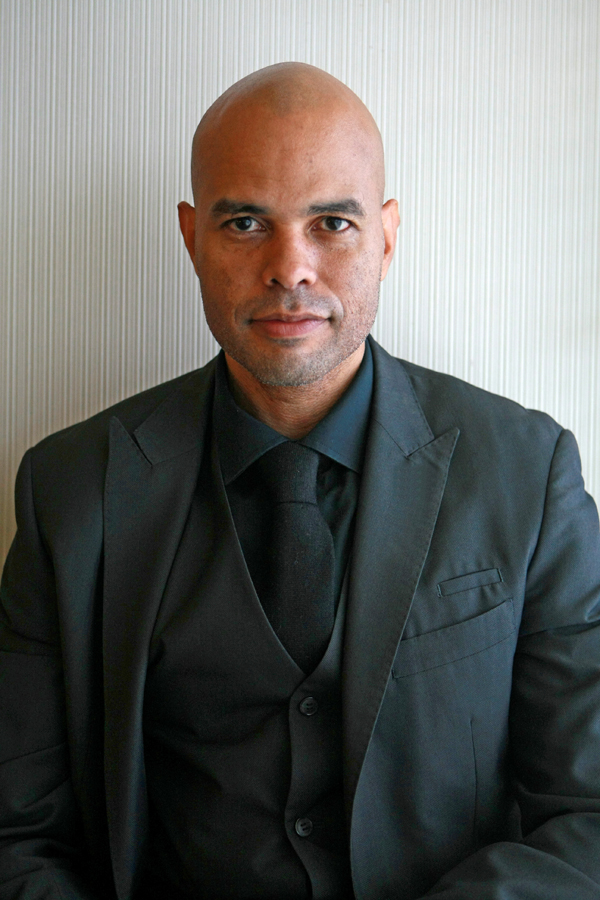 With the gentrification issues in South Los Angeles and Inglewood, Black entrepreneurs are greatly needed, especially those who have the finances to build and buy on a large scale.  Nipsey Hussle was that guy.  A Black person who didn’t take his riches to more affluent communities where the people do not look like us.  With Nipsey Hussle staying in the community that raised him, and investing in those communities, we were benefitting from his success.

I’m from South Los Angeles/Mid City, and I’ve spent the last 13 years writing positive stories about Black people, Black organizations, and Black businesses in South Los Angeles, Mid City, and Inglewood, so I was proud of Nipsey Hussle’s entrepreneurial spirit and pride in our community.  He was being the change that we want to see.  His spirit will live on in all of the Black entrepreneurs who are running businesses in our communities.

Please look through the Standard’s website, view the different sections, and find a Black owned business to support.  That will support our community, and that will support what Nipsey Hussle symbolized.