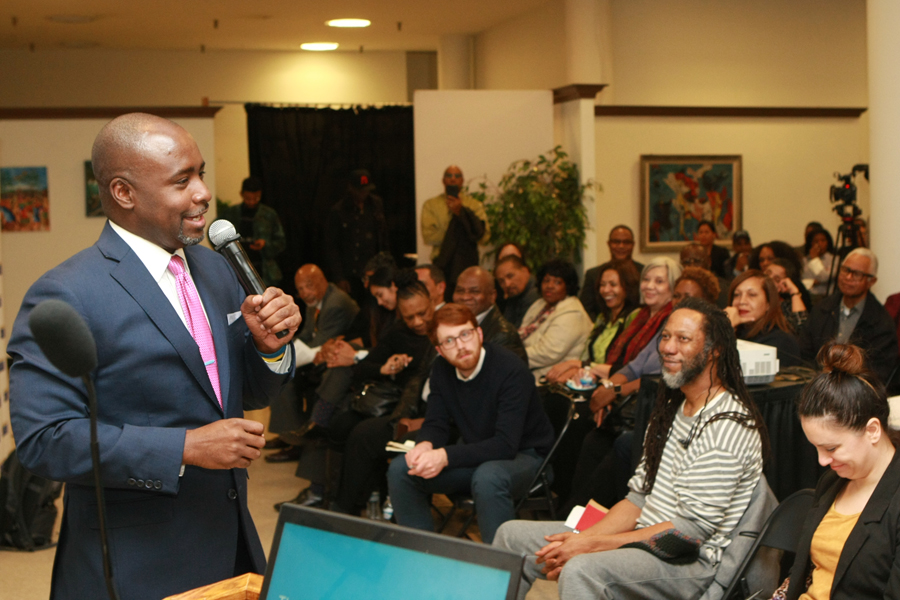 Councilmember Marqueece Harris-Dawson presents Destination Crenshaw to community members at The Museum of African American Art on the third floor of Macy’s at the Baldwin Hills Crenshaw Plaza. Photo by Jason Lewis

“…We can take this desire, this need, and this necessity at this moment in history, the necessity to tell our story, to document our story, but also to mark our territory forever.” -Councilmember Marqueece Harris-Dawson

When Metro’s Crenshaw/LAX line opens in 2019, it will run at ground level between 48th Street and 60th Street.  When riders look out of the windows of the train they will see Black culture through murals, paintings, photographs, sculptures, and other forms of art.

“If you’re going to run a train at grade level through our neighborhood, nobody is going to be able to get through without seeing, and feeling, and sharing our story,” Councilmember Marqueece Harris-Dawson said to a large crowd of community members at The Museum of African American Art, which is on the third floor of Macy’s at the Baldwin Hills Crenshaw Plaza.

The City of Los Angeles is going through major changes, with many minority communities having to fight to be properly represented.  Harris-Dawson pointed out that in most communities, Metro’s expanding light-rail system is being built underground, but along a 1.1 mile section of Crenshaw Boulevard, it will be at grade level.  He also touched on the gentrification issue that comes along with light-rail expansion.

“One of the challenges that we have faced in our community and continue to face is, how do we make sure that our place in Los Angeles is consistent with what Los Angeles is to everybody else?” he said.  “How do we have a community that represents us on the one hand, and meets our standards about how a community should be run, without that happening in a way where we have to move out and somebody else gets to move in?”

One of the few predominantly African American areas in Los Angeles is along or in the vicinity of Crenshaw Boulevard, and this area not only has a national presence, but is known world wide.  Harris-Dawson mentioned that at any given time there are 30 African American members of Congress, and that currently, three of them represent one part or another of Crenshaw Boulevard.  He went on to talk about a trip that he and his wife took to Paris.  While listening to a radio station that played pop music, he heard several songs that were written, produced, and performed by artists who are from South Los Angeles.

South Los Angeles’ impact on pop culture is one of the inspirations behind Destination Crenshaw.

“We felt like there should to be a place to celebrate that story,” Harris-Dawson said.  “Los Angeles was the first big city, and by big city I mean top five city in the country, to elect an African-American mayor.  If it wasn’t for Tom Bradley, we wouldn’t even be in this mall.  We developed traditions, and we developed art.  The holiday of Kwanzaa, which is celebrated all over the world, (it was created) right here on 48th Street.  So we have a story to tell.  We have a statement to make about this community.

“I’m excited and proud to say that we can take this desire, this need, and this necessity at this moment in history, the necessity to tell our story, to document our story, but also to mark our territory forever.  That we can take that, and marry that with the opportunity of the Metro rail that will run down Crenshaw Boulevard.”

Destination Crenshaw is scheduled to open in October 2019, coinciding with the opening of the Crenshaw/LAX Metro line.  For more information on this project and to give your input, visit www.destinationcrenshaw.la and find them on Facebook and Instagram.