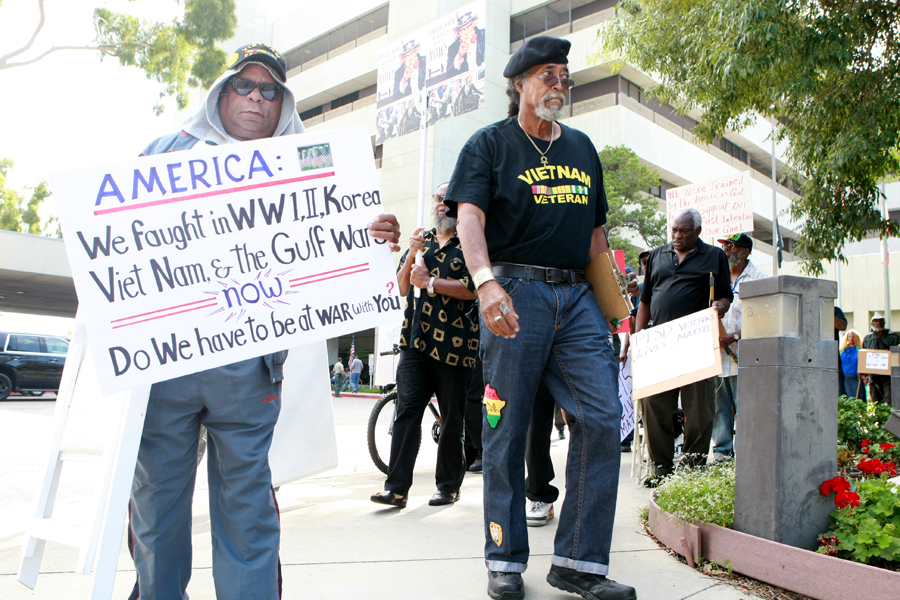 Veterans held picket signs outside of the West L.A. VA Medical Center. They feel that members of their group are being denied benefits. Photos by Jason Lewis

The veterans feel that they are being denied benefits and services because of their race.

Local African-American veterans have been protesting what they call unfair treatment by the West Los Angeles Veterans Affairs (VA) Medical Center.  They have held picket signs outside of the hospital in Westwood, and marched down Wilshire Blvd. in an effort to receive what they consider fair treatment.

For the past 15 years, these veterans have been a part of a peer support group that was led by Dr. Earl Gardner, who is an addiction therapist.  The men suffer from post traumatic stress disorder (PTSD), and the group has met twice a week to discuss their various issues, and to help each other navigate their way through the VA’s process to receive full benefits.

“The VA has an obligation to treat people,” Gardner said.  “You allow them to come into the military, then they become traumatized.  You owe them.  Saying that they’re untreatable, or that you’re not going to treat them, or however you disguise your rationale, we’re saying that’s not going to work.”

Some of the veterans in the group receive 100 percent benefits while others have been denied or only receive partial benefits.

“The VA has already acknowledged that something has happened to that veteran, so they’re going to compensate that veteran by paying them, lets say $3,000 a month for the rest of his life,” Gardner said.  “But benefits without treatment equals disaster.  They know that you’ve been on a suicide mission, or a death trip for 30 or 40 years.  So if they don’t treat us, we’ll just go and die.  We’ll kill ourselves.  Then they won’t have to keep paying us.”

The protest began when Gardner was recently reassigned by the VA, and the veterans feel that the change is an attempt to break up their support group.  They strongly identify with Gardner, who is also an African-American veteran, and many of the topics that are discussed in the group center around the racism that many of the veterans experienced when they were on active duty.

Since changes were made to the group, they have continued meeting with Gardner twice a week, but instead of meeting at the VA, they have been meeting at Ladera Park in the picnic area.  They have essentially been treating themselves.

“We’re doing it in spite of the VA,” Gardner said.

The group is currently looking for a permanent home, such as a community room, so that they will not have to continue meeting at the park.  They are also performing outreach to attract younger members who served in the more recent wars.

For more information about this group of veterans, contact Dr. Dr. Clarence Eziokwu Washington at the We Can Foundation in Leimert Park Village, 4300 Degnan Blvd., (323) 293-9845.