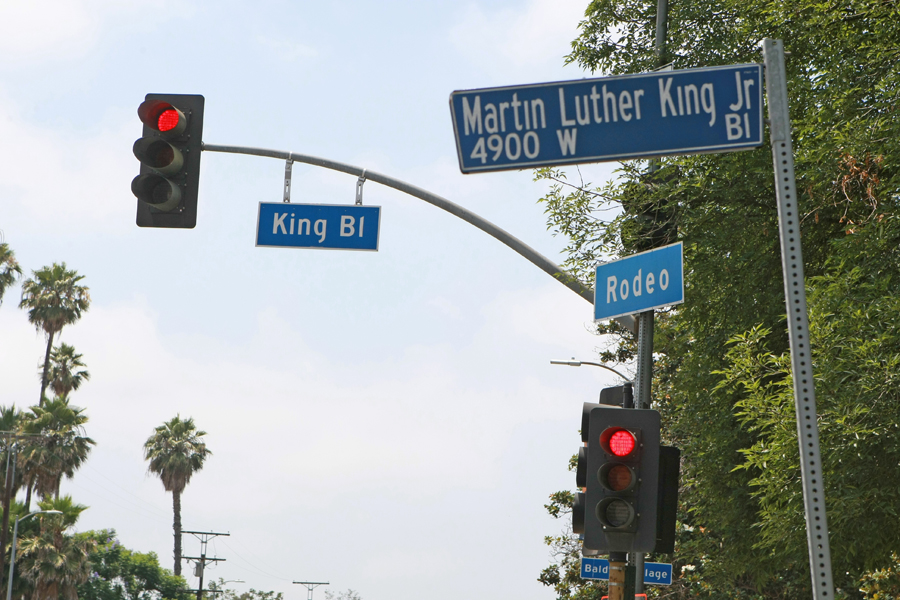 If the name change is approved, Obama Blvd. will intersect with Martin Luther King Jr. Blvd. Photo by Jason Lewis

Obama Boulevard is set to be unveiled on Presidents' Day 2019.  It will intersect with Martin Luther King Jr. Blvd.

***Update from "Renaming Rodeo Rd. after former President Obama met with praise and criticism" article which was published in July of 2017.

Obama Boulevard is set to be unveiled on Presidents Day 2019, said Vanessa Rodriguez, a spokeswoman for Wesson. Wesson’s office has had “preliminary” talks with the former president’s and first lady’s offices about having them attend the unveiling, she said.

The process to rename Rodeo Rd. after former President Barack Obama has begun.  The idea began to circulate about a month ago around the office of Los Angeles City Council President Herb Wesson, who represents the 10th Council District, where Rodeo Rd. is located.

A resident of the 10th Council District, who lives off of Rodeo Rd., emailed Wesson’s office, proposing the name change.

“As we started talking, we realized that we have Washington Blvd., Adams Blvd., and Jefferson Blvd.,” said Kimani Black, Assistant 10th District Director.  “Those are all named after presidents.”

While speaking at the July Empowerment Congress West Area Neighborhood Council meeting, which was held in the Baldwin Hills Crenshaw Plaza community room, Black pointed out that Martin Luther King Jr. Blvd. on its west end runs right into Rodeo Rd., right at Rancho Cienega Park.  That park was where then-Senator Barack Obama made his first speech after he announced that he was running for president.

“If Martin Luther King Jr. didn’t walk across that bridge in Selma, there would have been no way that Obama would have been able to run for president,” Black said.  “So we thought about the intersection of King and Obama, and people got excited.”

Wesson made a motion at the City Council meeting to rename the street after Obama.

“Nine years ago I had the honor of introducing then-Senator Obama at his first campaign rally held at Rancho Cienega Park on Rodeo Rd.,” Wesson said.  “The renaming will enable everyone who travels the boulevard to recognize the road as a fixed landmark within the city of Los Angeles dedicated to celebrating the legacy of President Barack Obama,”

The city council voted 14-0 in favor of renaming the street.  However, the name change is not a done deal yet.  The City Engineer has to perform a feasibility study on the renaming of the street, and the City Attorney’s office has been instructed to write an ordinance that would officially change the name.  When those steps are complete, it will be back to the city council for review.

While this is taking place, community members are strongly encouraged to visit the 10th Council District website at www.herbwesson.com, where they can leave a comment stating whether they are for or against this name change.

Black discussed the impact on the community that the name change would have.  At the neighborhood council meeting, he pointed out that most of the homes that are on Rodeo Rd. have another street name on the physical address.  For example, a house on the corner of Rodeo Rd. and Degnan Blvd. would more than likely be listed as being on Degnan Blvd. instead of Rodeo Rd.  Black said that very few homes would be affected by the name change.

Some people who are against the name change are concerned that renaming the street could lower the property value.

“One of the things that I’ve heard is that when people have traveled throughout the United States, and when they see streets with black people’s names on it, the property value is here (pointing down),” Black said.  “I want you to look around.  The street name doesn’t determine the property value.  It’s the amenities of the community and the people in that community.”

Black pointed out that there have been many improvements to the area, with more to come, so he does not believe that property values will go down simply because a home is between King and Obama.

One resident of Crenshaw Manor, which Rodeo Rd. runs through, felt that Obama should receive a higher honor.

“We don’t feel that it is appropriate to name a little street after a great man like Barack Obama,” she said.  “He deserves much more than that.”

Black pointed out that it would be difficult to change the names of longer streets.  Using Venice Blvd. as an example, he said that it runs from the beach to downtown, so a change would affect several communities, and a number of City Council Districts would have to be involved.  By selecting Rodeo Rd., it only affects City Council District 10.

This proposed name change has similarities to the 1983 proposed name change of Santa Barbara Ave. to honor Dr. King.  Many streets were considered, and Santa Barbara Ave. was chosen because it only ran through two city council districts.  Business owners complained because they would have to change their letterhead, business cards, etc., and various city departments complained for budget reasons.

According to a Los Angeles Times article, it cost the city about $70,000 for new signs when Santa Barbara Ave. became Martin Luther King Jr. Blvd.  Black said that changing the Rodeo Rd. street signs would cost about $10,000.

For more information on the process of this street name change, visit www.herbwesson.com or call Councilman Wesson’s office at (213) 473-7010.