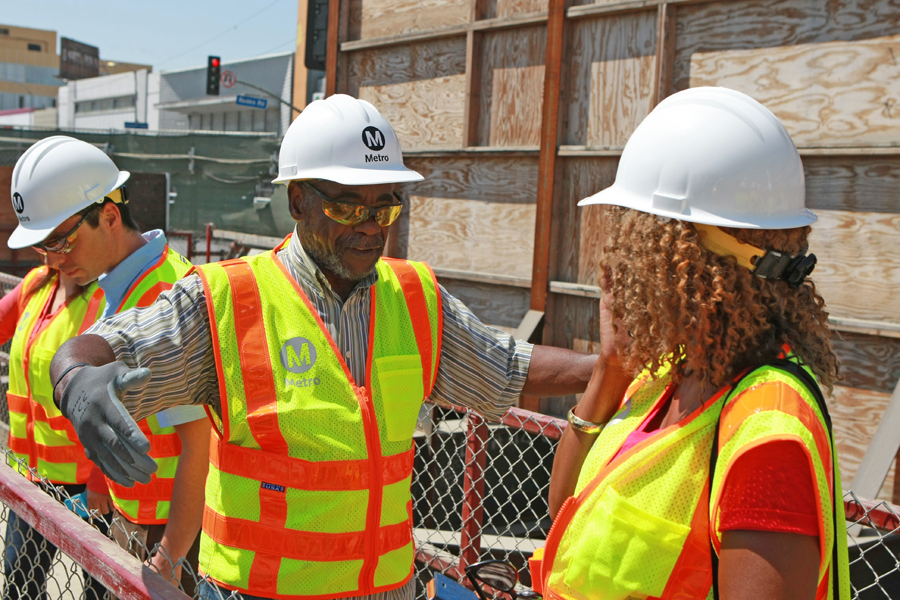 Johnnie Raines of the Leimert Park Stakeholders joins the CLC for a tour of the Crenshaw/LAX Transit Project construction site. Photo by Jason Lewis

This Community Leadership Council allows local residents to have a voice in the development of the Crenshaw/LAX line.

Since construction of the Crenshaw/LAX Transit Project began in 2014, Metro has become embedded within the greater Crenshaw area.  To ensure that this new rail line does not simply pass through the area, and so that community members can take full advantage of the train, the Community Leadership Council (CLC) was created.

The CLC works closely with Metro so that local residents’ needs and desires are met, and so that people can greatly benefit from the train passing through their neighborhoods.

The CLC “acts as a liaison between the community’s needs and Metro,” said Arna Fulcher, co-chair of the CLC.  “The CLC is the voice of the people at the table.”

The CLC is composed of up to 25 stakeholders who live and/or work within the project area, have specific knowledge about the communities serviced by the project, reflect the diversity of the project area served, and have memberships or affiliations with one or more community organizations.

Fulcher is the executive director of First Community Development Corporation, an affiliate of Inglewood-based First Church of God…Center of Hope.  Her co-chair at the CLC, Armen Ross, is the president of the Crenshaw Chamber of Commerce.  This is the first community based partnership between Metro, the community, and elected officials.

The CLC has several tasks at hand and they are greatly influencing many ongoing projects.  They are ensuring that the needs of local small-business owners are met, and they are also finding ways to encourage people who are ingrained into a car culture to breakout and use the train instead.

“In this community, a lot of people have never co-existed with a rail line,” said Kinya Claiborne, L.A. Metro community relations manager.  Claiborne has worked closely with the CLC.  “L.A. is not New York, where the train is the mode of transportation.  A rail line is new for the community.”

With Los Angeles in the midst of a transportation revolution, Claiborne has met with a number of community organizations to promote the benefits of using the Crenshaw/LAX line when it opens in 2019.  The CLC is pushing for certain types of developments to make it more practical for people to get out of their cars and use the train.

“The only way that we’re going to get people out of their cars is to get housing near rail,” Ross said.  “That’s what we’re trying to do on this project.  The more that we can build housing and office space near rail, people will start taking advantage of what we have here.”

“We need to find housing that’s closer to the rail line, but it needs to be housing that people want to live in,” Fulcher said.  “We’re not going to just throw up some apartment building where people can’t sleep at night because the train is passing through.”

The CLC has toured other rail lines that have housing nearby.  Fulcher said that some of the housing that they saw was elegant and soundproof, while others were not as desirable and did not buffer the noise from the train.

“Part of what the CLC is doing is making sure that whatever the housing is that is developed around the rail line, that it is affordable, and people would want to live in it and raise their children there,” Fulcher said.  “That there is some green space available.  It’s not just brick and mortar.”

Many people who have lived in the greater Crenshaw area for decades may not be the people who benefit the most from this rail system.

“It may not even be our generation that sees the big switch from cars to rail and other forms of transportation,” Ross said.  “The system is not fully built out.  Once the system is fully built out, you’ll be able to go to all of the destination spots in the city.  You won’t need a car.  And as housing gets built much closer to the rail, and as the really young people grow up, who are not car conscious like we are, we’ll start to see some real results.”

With the city becoming more connected with a greater rail system, people will be able to reach more destinations without getting into their cars, which will make this train system even more appealing.  Ross said that he recently was able to take his granddaughter to Universal Studios by using the train.

“As the rail is connecting us countywide with destination locations, people will get out of their cars and use rail,” he said.  Wherever you have cars, you’re going to have traffic.  But if you can walk a block, or two blocks, three blocks, and catch a train to get to where you want to go across town, or to the Valley, or to airport, or to the beach, people will get out of their cars.”

While the train will make it easier for people to leave the community, it will also bring business into this area, which will allow people to spend their money here.  Claiborne held a number of focus groups with people of all ages.  In several meetings, she saw that people leave the community for shopping, dining, and entertainment.

“What I learned is that a lot of them weren’t going to the Crenshaw Mall,” she said.  “They were going to The Grove, or other places.  The money was leaving the community.  With the train, the remodel of the Crenshaw Mall, more sit-down restaurants, it’s going to impact the local community for the good.”

While new retail and dining establishments will be coming into the area, there is a push to protect the existing small businesses.

“It’s also important to maintain the historic value of the community,” Claiborne said.  “Like in Leimert Park, there are businesses that have been there for a long time.  This project will bring in the new, but it will also maintain the old.”

Many small business owners were extremely concerned with how the construction of the rail would affect them.

“There were a lot of concerns from local businesses that this project was going to deter their consumers,” Fulcher said.  “The CLC asked Metro to develop some type of marketing plan.”

In the early stages of construction, Metro created banners that went in front of businesses, informing the public that the shops and restaurants were still open.

Eat, Shop, Play is a marketing campaign that was created by Metro to give the small businesses more exposure.

“It’s an effort by Metro to keep these businesses alive and thriving by sponsoring lunches at certain cafes and restaurants,” Ross said.  “They have shopping days at different businesses along the corridor that were being affected by parking being taken away or construction right in front of their businesses.  People don’t know if you’re opened or closed.   It’s been very effective.”

Through the use of online tools, traditional media and promotional materials, Eat, Shop, Play makes a significant commitment to supporting businesses, during and after construction.

“Eat, Shop, Play was one of the first programs of its kind, and it started on this project on Crenshaw,” Claiborne said.  “Then it evolved into Inglewood, and then into other communities.”

Metro also created the business solution center, which the CLC was instrumental in creating.  There is an office on Crenshaw Blvd. and in Inglewood.  This center helps business owners with accounting management; access to capital; business development; marketing assistance; social media and website; and other business related-services.

“It was also critical for us to alert those businesses to have an online presence,” Fulcher said.  “So that they could come into the 21st century with knowing how to have some online marketing, or being able to take orders online where people would just have to come by and pick up if it wasn’t a sit-down establishment.  Or create a way for these businesses to start learning how to work with and identify their consumer, and provide their services in the best way that they could, via internet.”

To further assist the small businesses affected by the construction, the Business Interruption Fund was created.  It allows businesses to obtain grants of up to $50,000 a year, based on losses sustained during the construction period.  Metro has paid nearly $3 million along the Crenshaw corridor.

The CLC is making great efforts to ensure that this community benefits from the Crenshaw/LAX line.  Local residents are welcome to participate, and they are encouraged to attend the CLC’s quarterly meetings.  For more information about the CLC, contact them at (213) 922-2736.  Visit their page on Metro’s website at www.metro.net/crenshaw.  Also follow them on Facebook and Twitter.

View photos from the CLC's underground tour of the Martin Luther King Jr. station at https://lastandardnewspaper.com/index.php?option=com_content&view=article&id=577:the-clc-takes-an-underground-tour-of-the-crenshaw-lax-line-s-mlk-station&catid=72:news&Itemid=241