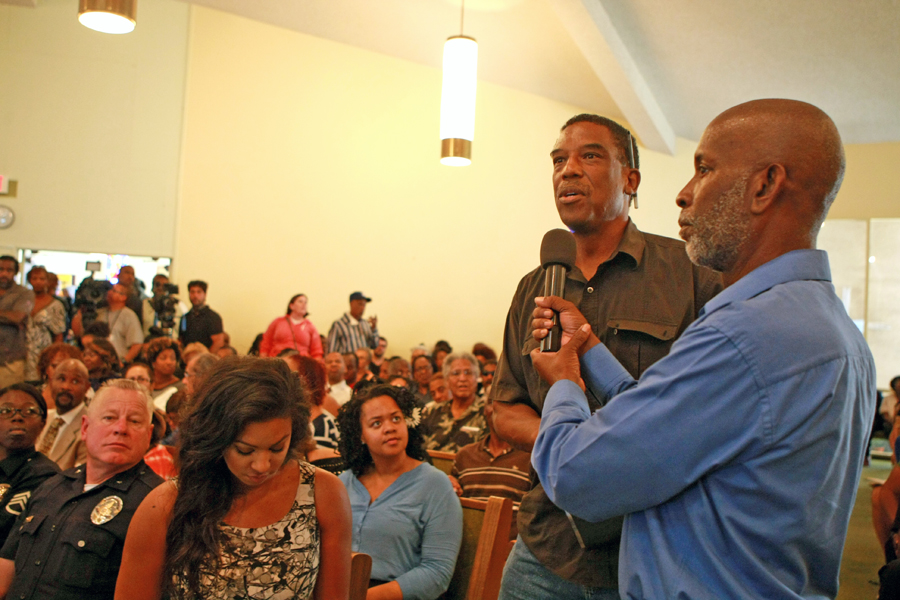 Community members expressed their anger and concerns about the violence in South Los Angeles at an emergency meeting held at Hamilton United Methodist Church.  Photo by Jason Lewis

Activists want community based solutions rather than a stronger police presence to solve issues in minority communities.

The debate over the tactics used by law enforcement in minority communities continue to rage on throughout the nation.  Presidential candidate Donald Trump has been vocal about the means in which he would solve the violence that plagues low-income areas.

Trump said on  Fox News’ “The O’Reilly Factor” that he knows police officers in Chicago, and if they were given the authority to do it, “they would get it done.”  Host Bill O’Reilly asked Trump how those police officers would combat high crime.

“By being very much tougher than they are right now,” Trump said.  “They're right now not tough.”

Trump went on to talk about a conversation that he had with a Chicago police officer, where the officer told Trump that he would “be able to stop it in one week.”  O’Reilly asked if the officer gave details about how he would pull off such a feat, and Trump replied, “he wants to use tough police tactics, which is okay when you have people being killed."

In one speech on the campaign trail, Trump said “there’s no compassion in tolerating lawless conduct for anyone.”

“What we get is jail.  What we get is more law enforcement.  That’s what the system’s solution has been for black folks,” said community activist Aqeela Sherrills, principle partner of the Reverence Project.  He made these comments last fall after an emergency meeting at Hamilton United Methodist Church in South Los Angeles to discuss the surge in street violence in the black communities of the city.

“Every time there is violence, the solution is more police,” he said.  “We haven’t even looked at the root of the cause of why violence is spiking.  Our tax dollars are locked up by law enforcement.  If gang intervention and prevention was properly funded, there would be no spike in violence in the city.  They would be able to create jobs and entrepreneurial opportunities for a lot of young black and Latinos who are living in the neighborhoods.  It would strengthen organizations so that they would have greater capacity to hire and train the next generation of interventionists.”

Sherrills said that 70 percent of public safety dollars are being consumed by law enforcement.  He also pointed out that in the city of Los Angeles, the budget for the LAPD has continually increased over the past decade, but the funds for community based programs has stayed the same; programs such as gang intervention and prevention programs.

“White folks in this country get a lot more access to healing technologies and recovery services,” he said.  “Where as black folks are only eight percent of the population of the state of California, we lead in every single category of victims of violent crime in the state.  Black people, we are the poster child for crime victims and crime survivors in this country.  But we don’t get our fair share of resources and support services.

“The thing is that the system is not doing enough.”

While Abdullah was spearheading the movement to oust Beck, which did not lead to his firing, she discussed solutions to the issues within minority community; solutions that do not involve the law enforcement.

“We do not believe that they are the best organization to deal with the issues that we want to have dealt with,” she said. “So at this point they have set up a very adversarial relationship.  My entire lifetime, and I was born in the ‘70s, it has been one where police treat black communities as if they’re an occupying force and we’re enemy combatants.  So I’m not interested in talking with them about community solutions.  I’m interested in developing indigenous community solutions; meaning ones that we identify for ourselves.”

Abdullah wants to see less police officers and more community workers tackling issues within the community, and she is looking for help from the city.

“We need resources,” she said.  “We need intervention and prevention workers.  You can hire three interventionists, if we take the Gang Reduction and Youth Development (GRYD) workers, for every LAPD officer.  We’d like that money to be shifted.  We know GRYD workers do a good job.  We know interventionists are very effective.  We would like to see money go there.  We would like to see money go into mental health resources.  And that be the thrust of where we put our energy, and focus, and budget as Los Angeles.  Rather than funding police to do a job that they are not qualified to do.”

Like Sherrills, Abdullah wants to see the city spend less money on law enforcement, and spend more money on people who are more qualified to treat the root of the problem.

“We spend 54 percent of our city budget on LAPD,” she said.  “We need people to walk kids to school.  We need people to do the community work, to clean the streets.  You don’t need a badge and a gun to do that work.  In fact, it makes you less effective.  So lets put the money where every study in the world shows that the most effective use of funds is, spending it on resources and livable wage jobs for the people.  People commit crimes because they don’t have resources.  Let’s get to why people commit crimes.  If you don’t have a job, you’re going to have to steal your food.  If you don’t have mental health resources, you may behave in ways that seem criminal when you really need mental health treatment.”