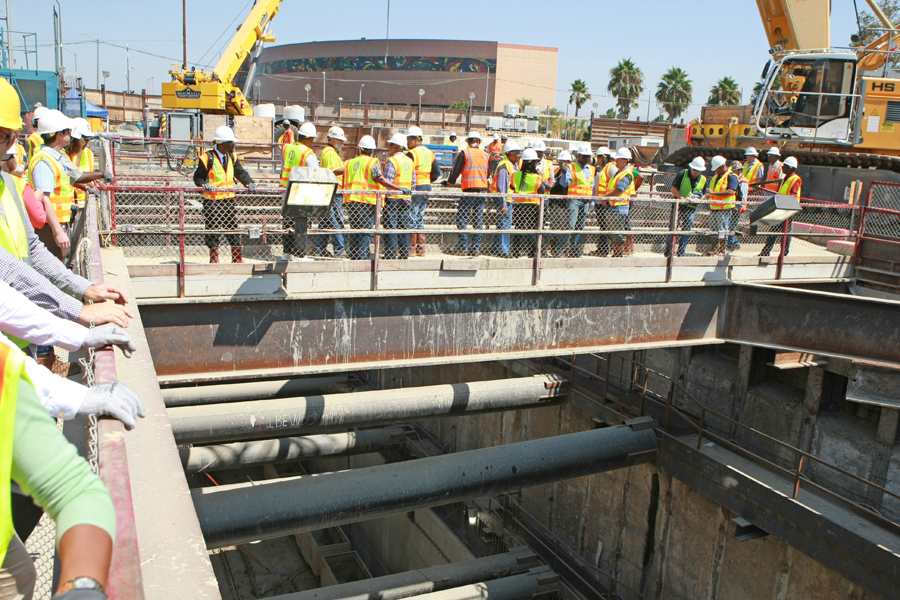 The bulk of the construction for Metro’s Crenshaw/LAX Transit Project is out of sight, as there is a six-story hole under Crenshaw Blvd. at Rodeo Rd., Martin Luther King Blvd., and 43rd Place. Photo by Jason Lewis

Motorists may have noticed the ground vibrating when stopped at the traffic light at the intersection of Crenshaw Blvd. and Rodeo Ave.  There is a simple answer to why the street seems to have a bounce.  There is a six-story hole underneath, and cars are driving over one-and-a-half-foot thick concrete deck panels that are held up by steel girders.

That sounds a little scary, but Anthony Crump, Metro’s Construction Relations Manager of the Crenshaw/LAX Transit Project, understands the engineering and has two reassuring words.

While there has been a lot of visible construction along Crenshaw Blvd. over the first two years of the project, and motorists have dealt with the hassles of street closures, the bulk of this massive project has been unseen.  The closures were due to workers installing the concrete decks over the three underground stations at Exposition Blvd., King Blvd. and 43rd Pl.  The decks allow the work crews to continue to excavate the tunnel underground, while traffic continues to flow on the street.

“That entire segment, when you’re driving over those concrete panels, where it kind of rumbles a little bit, and you kind of feel it shake a little bit, that area is where in essence you have a six-story hole underneath the ground, and underneath the traffic that’s flowing over there,” Crump said.  “Since we did those decking operations at those three stations, we’ve hit bottom at all of the sites, which the public doesn’t see.  And in those holes we’re building what we call station blocks, which is the actual subway stations.”

Along Crenshaw Blvd., just under the surface there are two parallel tunnels that are being bored out by a 400-foot long machine named “Harriet,” which is named after abolitionist Harriet Tubman, who freed hundreds of enslaved people through the Underground Railroad.  At this point the tunnel-boring machine has traveled south from Crenshaw and Exposition, down to around Coliseum.  When it reaches the Leimert Park area, the boring machine will be sent back to Exposition to dig out the second tunnel.  Each tunnel takes about six to seven months to dig out.

At the Expo/Crenshaw station, the floor has been laid down, and the plumbing and electrical work are being installed.  That station will be about two city blocks long, stretching south to around where Pep Boys is on Rodeo Place.  This station is longer than usual because it will feature crossover tracks.  Because it is at the end of the line, the crossover tracks allow the train to change tracks so that the train can travel in both directions on one single track.

When the 8.5 mile long project is complete, it will take passengers on a ride that is underground, at street level, and above street level.

The first mile heading south, roughly through 48th Street, the train is underground.  It comes up and travels at street level through roughly 59th Place.  By the time it hits 60th Street it will be completely underground again.  It will resurface on Florence Avenue in Inglewood, and from that point there will be portions that are at ground level and portions that are above ground.  The train will continue along Florence until it reaches Aviation, where it will then head south toward the airport.

The construction of this light rail can be considered the most monumental project in Los Angeles at this moment.  That includes the numerous skyscrapers that are being built in downtown.

“It’s actually more of an endeavor,” Crump said.  “It takes more of a level of effort.  The primary difference is that when you’re building a skyscraper, the skyscraper is being built entirely on privately held land.  This (Metro project) is substantially different because it is a project that’s being built in the public right-of-way.  We’re building and operating something in the public streets.  That commuters have to use.  That residents have to use.  That businesses have to use.  You have a lot of different users that need to have access to the very space that we’re working in.”

One difficult part of a project like this is that this metropolis that is Los Angeles has already been built, opposed to cities where the subway system was built as the city grew.  New York, for example, opened their first elevated line in the late 1800s and their first subway line in the early 1900s.

“There’s no doubt that it’s much easier to build a rail system, or a subway system of any sort before the city gets built up around it,” Crump said.  “Whether it be freight railroads, passenger rail, or commuter rail services, those cities grew up around it.  Los Angeles is a completely different beast in that sense.  Los Angeles grew up around freeways and boulevards.”

While Los Angeles has not been conducive to mass transit in the past, the city now has to adapt to it.  Metro’s first rail line was the Blue Line, which recently celebrated 25 years.  The line has more than 80,000 riders per day.