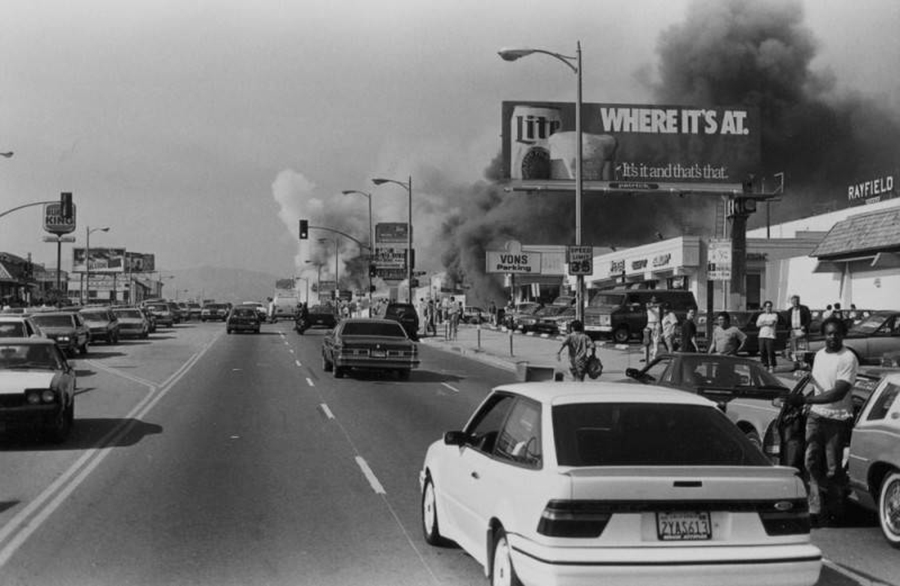 Many buildings were set on fire in 1992 as people protested against the acquittal of four LAPD officers for the beating of Rodney King. Photo by Gary Leonard, courtesy of the Los Angeles Public Library.

Community Build partnered with the Los Angeles Public Library for a screening of “The Fire This Time,” which highlighted the issues that led to the 1992 Uprising.

Thirty years after the 1992 Los Angeles Uprising, Black communities of South Los Angeles are still dealing with many of the same issues that led to people en masse to taking to the streets.  Those issues were highlighted in the 1994 documentary “The Fire This Time.”

“What was scary to me is that what we talked about in 1994 regarding the Crenshaw Corridor is the same conversation that we’re having to this very day,” said Albert Lord, vice president of Government Relations and Arts Programs for the nonprofit Community Build, Inc.  “About gentrification, about social unrest, and about how our economic problems along the corridor have not been addressed.  We said this 30 years ago.”

Lord was an associate producer and sound editor for the documentary which explores the long history of racial oppression in Los Angeles which led to the 1992 uprising.  The film was written and directed by Randy Holland, and the Los Angeles Public Library held a recent screening of the documentary.

While the tipping point of the uprising was the acquittal of four LAPD officers for the beating of Rodney King, the documentary showed that decades of neglect to Black communities in South Los Angeles led to the explosive events that lit the city on fire.  The film mentioned the 1968 Kerner Commission, which stated that “Our nation is moving toward two societies; one Black, one White—separate and unequal."  The report, which came out three years after the Watts Rebellion, also “attributed the (nation-wide) riots to lack of economic opportunity for African Americans and Latinos, failed social service programs, police brutality, racism, and the orientation of national media to White perspectives."

As a response to the 1992 Uprising, Community Build, Inc. was founded in 1993.  The nonprofit organization has brought social, educational, and employment resources to South Los Angeles.

“Organizations like Community Build serve as a conduit to opportunities in social development and job development that are otherwise unachievable,” said Robert Sausedo, CEO of Community Build, Inc.  “We become the voice of those who are looking for work or looking for help.  Oftentimes government agencies may have the resources, but they either don’t know how to employ them properly, or the deployment of those resources is done more politically, rather than what real need is.

“In the worksource system, politically there’s the temptation from those who are elected to distribute funding for the needs of the people equally.  But we know when we look at the data that it shouldn’t be distributed equally, but based on the highest need”

“What we’re doing is participating in a new cohort to get young people in the pipeline,” he said.  “To understand aviation from the curb to under the wing, and from blue sky to black sky, which is space.  The whole garment is covered from the college-educated jobs all the way to the baggage handler on the street.”

“The Fire This Time” highlighted the rise of gangs in South Los Angeles, the government’s role which led to the formation of the gangs, and the investments in prisons.  The documentary featured Dr. Ernest Smith, who had a youth program at King Drew Medical Center.  He said that the city did not give his program any funding, and he pointed out that there was a larger investment in prisons.  He made that statement as he was pointing out of his office window to the Los Angeles County jail that was being built about a mile and a half away.

Community Build, Inc. has made tremendous efforts to steer teenagers and young adults away from gangs, and those efforts have made local communities safer.  Its gang prevention and intervention programs are number one in the city’s Gang Reduction and Youth Development (GRYD) system, according to Sausedo.

“Our area for intervention is the Southwest police division,” he said.  “Southwest is the safest part of South L.A. because of our intervention program.”

“If we replace hopelessness with hope, and give them a roadmap to follow, these kids can turn into what they dream about being,” Sausedo said.

Resources for Black Americans are vital for this nation to move in one direction, opposed to separate and unequal directions.  Organizations such as Community Build, Inc. are ensuring that Black communities have those resources.