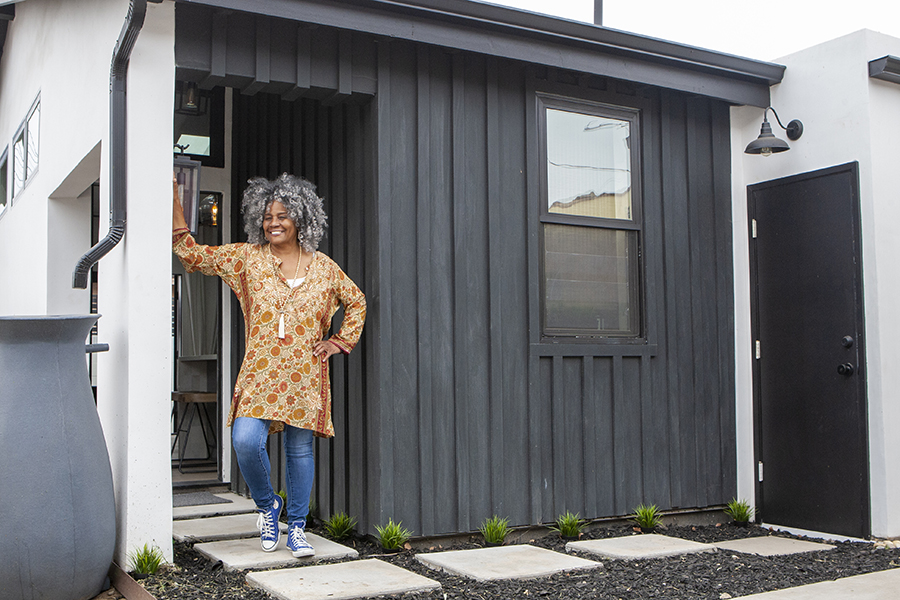 Los Angeles based interior designer Tauska Trusaun-Kennedy specializes in accessory dwelling unit (ADU) projects, also known as granny flats and tiny houses.  She launched RUME by Tauska in 2018, and many of the homes that she has worked at are in South Los Angeles and Inglewood.

Trusaun-Kennedy recently completed a project in Inglewood where she had a 495 square-foot ADU unit built from the ground up adjacent to a garage, which was in the home owner’s backyard.  The ADU unit has one bedroom, a living room, and a full kitchen that includes a stove and dishwasher.  The unit has the same amenities that are found in in brand new apartments.

“I wanted some of the luxury things that people would find in a luxury apartment, like marble tile and nice wood floors,”  Trusaun-Kennedy said.  “Just so that this would feel more like a home.  A place where somebody could actually live in.”

“You can use it for a family member, if you need an office space, if you need a space to exercise, and it’s a great space when you’re having people come to visit,” Trusaun-Kennedy said.  “There are many ways that you can use this space.”

People also use the space as a revenue stream.

“This is a fabulous way to do it,” Trusaun-Kennedy said.  “This location (in Inglewood) is very close to the new stadium.  So I mentioned to the client that this would make a great AirBnB.  That’s one option.  Or she can have a full time tenant.  There’s going to be a lot of privacy back here.  It’s a place where a tenant could live very comfortably.”

Structures or conversions that are not intended to be livable spaces do not have to adhere to all of the ADU codes, so some people use the space as a game room, extra living room, gym, office, or man cave.

“That right there extends the value,” she said.  “A structure like this affects the property value tremendously,”

Many homeowners can finance this project with the equity that they have in their home, or through loan programs.

“There are loans that you can get where you don’t have to pay the money back until after you build the ADU and it’s inhabited,” Trusaun-Kennedy said.

Many of Trusaun-Kennedy’s projects are in the areas where she grew up.  She is from Baldwin Hills, attended Audubon Middle School, Dorsey High School, and she graduated from Fairfax High School.  She knew from an early age that she wanted to have a career in interior design.

“I loved design since I was a kid,” she said.  “I was always drawing, and I was always designing; moving things around.”

Trusaun-Kennedy studied graphic arts and design at the Fashion Institute of Design & Merchandising (FIDM).  She received a double degree in interior design and architecture from Pratt Institute and she worked at some of the top advertising agencies as a graphic designer, art director, and project manager.

Trusaun-Kennedy advises home owners who are looking to build ADU units on their property to hire design build company.

“Don’t look for a contractor,” she said.  “Never look for a contractor to get a pricing or a quote on what you want to do.  The first thing that you want to do is find someone who is with a design build company, because you’re going to want a feasibility study.  They’ll know when your home was built, the value of your property, what you’re allowed to have on your property, and the cost.  At that point they can pretty much tell you what the cost will be.

“Then you’ll want to get a designer.  The contractor is kind of the last thing.  You want to collaborate with a designer, and let the designer know what you’re looking for, what’s on your wish list, and what would you like to have within the cost structure.

For more information about RUME by Tauska, visit www.rumebytauska.co and follow them on social media.