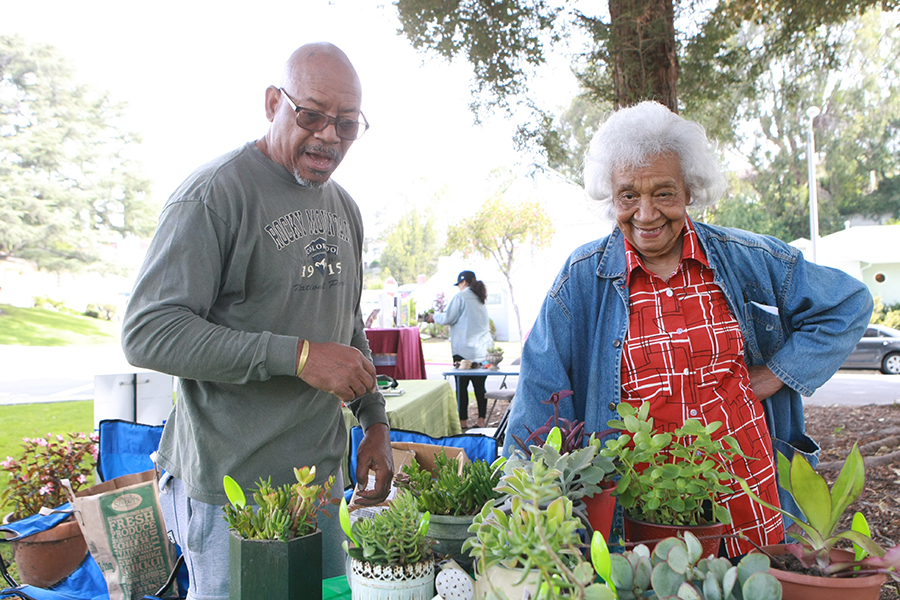 Lumpkin built the garden at 54th Street Elementary School and she has been sharing her craft with the community for decades.

Georgia Lumpkin has been gardening since 1948, which was at the beginning of her marriage to Tuskegee Airman Ted Lumpkin.  She taught herself how to garden, and she has some plants that she started to grow during the Civil Rights Era.

The Lumpkins are both in their mid nineties, and gardening may be one of many things that have contributed to their good health.

“Plants have a healthful vibe,” she said.  “Clean air and all that stuff.  I have them because I love them.  When people come out on my patio, they say it’s like a little Eden.  I have plants that I’ve had since our first house on San Pedro Street.  Been in the pot for over 50 years.”

Lumpkin moved to Los Angeles from San Antonio, Texas, but she is from Thrall, which is a small town northeast of Austin.  The town had less than 300 people when she was born, and currently the town’s population is less than a thousand people.

Lumpkin’s patio garden includes ceiling trees, liquid amber, and succulents, which she said are the easiest to grow.  She has over 100 different types of succulents in her garden.

Last month at the Inspired Garden Artistry garden tour, Lumpkin had dish gardens that she created for sale.  The proceeds are being donated to local non-profit organizations, such as the Wayfinder Family Services (Junior Blind) and the Fernando Pullum Community Art Center.

Lumpkin turned her gardening skills into a community service years ago.  While driving by 54th Street Elementary School many years ago, she noticed that the northwest corner of the campus had an area that was filled with trash.  So she became the school’s volunteer gardener.  She had the area cleaned out, raised money to build the garden, and had a mural painted on the building adjacent to the garden.

“She grew all kinds of things for the children to enjoy,” said Inez White, volunteer librarian.  “Sunflower seeds, strawberries, greens, pees, and tomatoes.  You name it and she grew it.  She taught them a lot about gardening, and she was well appreciated.  She showed them how to plant different things.  The whole school, including the adults, were taught how to garden.”

The Lumpkins have continue to be a delightful part of South Los Angeles through their community service efforts.