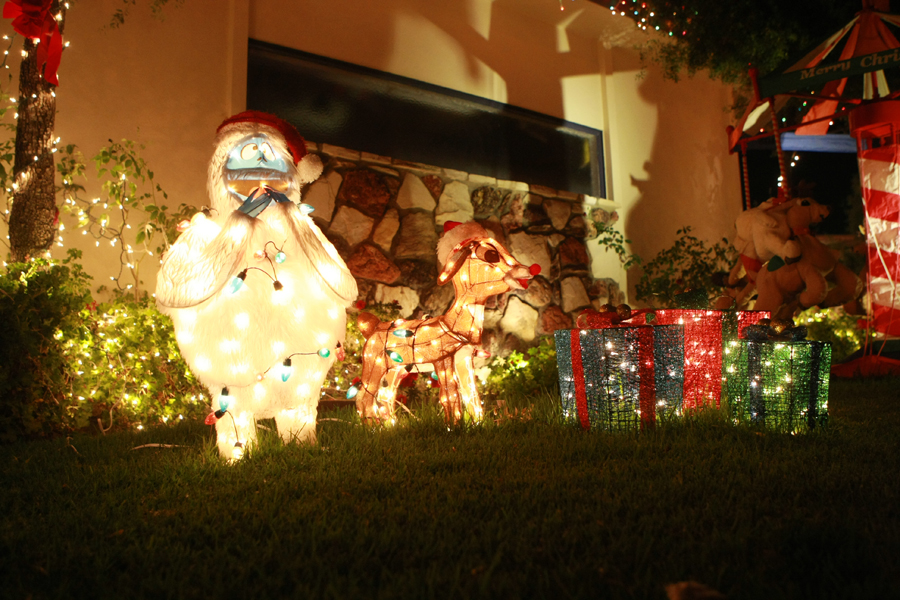 A scene from the 1964 Christmas stop-motion animated television special Rudolph the Red-Nosed Reindeer.

The spirit of the holiday is on full display on their Ladera Heights lawn.

The Hurst family loves pretty much everything about the Christmas season, and that’s showcased on their Ladera Heights front yard every year.  Each year the family decorates their house with sparkling lights and scenes that capture the various aspects of the holiday.

“My dad would do it for my sister and I, and that was one exciting period in time of my life, where my dad would get up there on the roof, and every year he’d change the design,” he said.  “It was something that I always wanted to do when I got married.”

Luckily for Hurst, his wife Tracey also loved Christmas lights, and they decorated the exterior of the duplex that they lived in when they got married. When they purchased their home, Ronald took the custom that his father had created years before to a higher level.

“Every year, in order to maximize the enjoyment of the season, I start the day after Thanksgiving,” he said.  “Rain or shine, work our not, I get up in the morning, and I have all of my stuff in the shed.  It’s a lot of work to bring all of that stuff out.”

Ronald starts around 7 a.m., and it takes him one full day to hang the lights and create the various scenes.  The scenes that he creates combine both the religious and commercial aspects of Christmas.

“We’re Christians, so the center piece of our yard is always the manger,” he said.

Outside of the manger, which never changes, Ronald’s children heavily influence the other scenes.

One of his daughter’s loved Santa Claus when she was a small child, so Ronald has St. Nick in an inflated propeller airplane.  His other daughter loved the animated movie “Frozen,” so the character Olaf from the film is featured.  Ronald created one section that’s called “Fantasyland,” which features Mickey and Minnie Mouse, and a scene from the 1964 Christmas stop-motion animated television special Rudolph the Red-Nosed Reindeer.

The Hurst family, who attend First Church of God in Inglewood, properly balance the original purpose of Christmas with what the holiday has evolved into.

“The key thing is, it’s all centered around family for me,” Ronald said.  “My kids are very aware of who their God is, and who their loyalty is to.  God first and family second.  Everything else comes after that.  Within that, we realize that Christmas is the best time of the year, because everybody wants to be nicer.  It’s all about the spirit of being happy, and that aspect of Christmas brings that spirit, and that’s what Christ was about.  He was about love.””

Ronald installs these lights and decorations himself for the most part, which meant that he had to learn basic circuitry.  This is not as simple as putting the lights up and flipping a switch.

“I have this creative mind, so I had to figure out how I could put up a lot of lights without blowing out the circuit,” he said.  “So when we bought this house, one of the first things that my wife wanted to do was put up light switches.  So we put electrical outlets all around the eaves, on the ground, and on circuit breakers.  So you don’t see that many cords, and the lights look seamless.  We can put them together in sequence without overloading a circuit.”

While Ronald isn’t as skilled as an electrician, he learned a few things so that he could power all of his creations.

“It’s no different than being in your house and running two microwaves and a toaster at the same time,” he said.  “They all draw a lot of amps.  If you have your Christmas lights on the same circuit that you have inside your house, you will overload that quickly.  So you turn on the toaster or the oven, if your lights are on the same circuit as the kitchen, you will not be able to run your lights for very long.  The key thing is that if you want to put a lot of lights in your yard, you have to get a separate circuit.  You have to make an investment to have 10 outlets, or however many that you choose, and have them on a separate circuit breaker that’s independent from anything in the house.  So the only thing that’s on them are the lights, and they’re on a timer.”

The Hursts have only had one issue with the circuits over the years.

“We added so much last year that it overloaded the circuit,” Ronald said.  “It took 15 years to do that.  So I had to order a new circuit that could double the volume.  I now have a lot more room now to add more things.”

Their efforts are certainly noticed and appreciated on their street, as Ronald said that many of their neighbors expect it on a yearly basis.  He has served 20 years in the military, and when he was deployed to Afghanistan, his wife climbed up on the roof to install the lights.

Ronald can easily pay somebody to install them, but that’s just not in his nature.

“As long as I can do it, I’m going to do it,” he said.  “I’m pretty particular, so having somebody else do it, I’d have to stay out there all day to make sure that they did it right.  So I rather do it myself.  So I put on my Christmas music and I go to work.”

The Hursts’ yard looks so good that people have thought that he was a professional light installer and tried to hire him.  They have truly created a master piece that embodies the Christmas spirit.