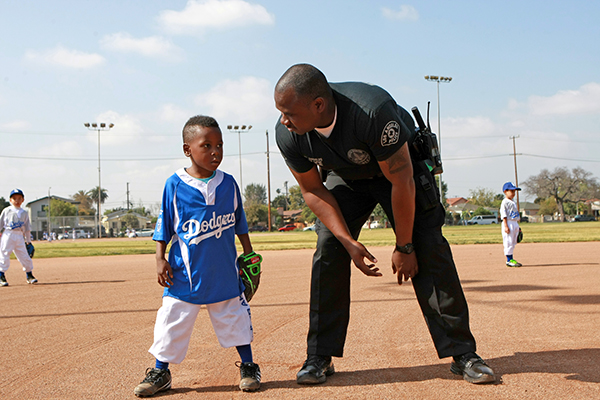 Community S.T.E.P.S. program builds a healthy relationship between the community and the LAPD.

The Community S.T.E.P.S. was brought to Harvard Park in South Los Angeles eight months ago, and it has been extremely beneficial for both community members and Los Angeles Police Department (LAPD) officers.

“The vision of the Community S.T.E.P.S. (Strategic Dialogue That’s Empowered by Public Safety) program is to bring law enforcement and the community together to create a safe space for dialogue and exercise,” said Eric Batch, Vice President of Government Relations for the American Heart Association.

On the second and fourth Saturdays of the month, LAPD officers walk around the park with community members starting at 9 a.m., and they also help out coaching the youth sports teams.  This program helps ease the tension between local residents and law enforcement officers, and through a partnership with the American Heart Association, this bimonthly event promotes better health within the community.

At this event, there are medical professionals present who administer cholesterol and blood pressure screenings and answer health questions; cooking demonstrations so that people can learn how to prepare food in a healthy manner; and produce giveaways.  Earlier this month, instead of a walk, the community members performed a street cleanup.

For the walk on May 12, they are switching it up again.

“We're asking people to bring their bikes, their skateboards, or anything that has wheels,” Batch said.  “We're going to ride around the park with the police officers instead of walking.  It's going to be a lot of fun.”

Local residents are enjoying the interactions with their neighbors and police officers, and they are creating healthier bonds with each other.

“Because it's community-based policing here, our goal is to bridge the gap (between the LAPD and the community),” said LAPD officer Marcus Whitehead.  “To put a Band-Aid on the wounds from the past.  Our goal is to reestablish the relationship with the community and getting them to know us as humans instead of just police officers.”

Whitehead, who grew up in Watts, views the interaction that he has with the community that he serves as being invaluable.

“It's rewarding,” he said.  “Because we're here on a daily basis and they see us interacting with the kids as community members.  We even have folks who say that they're glad that we're here because they feel safer to come to the park because we’re here.”

Health wise, this community program may have saved Whitehead from some serious medial problems.  During one of the walks, he took a health screening and found out that he had high blood pressure.  That led him to seeking out more tests, where he was diagnosed with hypertension.

“It was a real scary situation, and I had no idea,” he said.  “I feel that if it wasn't for the S.T.E.P.S. program I probably wouldn't have known.  I've always been an athlete so high blood pressure has never been a concern for me.”

Whitehead changed his eating habits and incorporated more exercise into his lifestyle.

“I cut out fried foods, and I decrease my sodium level by a lot,” he said.  “I was a big fan of french fries.  I will have them occasionally, but now I have more baked foods, salads, fruits and vegetables.”

Whitehead said that he’s seen many of the regulars from the walks make improvements to their health as well by exercising and by taking tips from the medical professionals at the event.

This program also collaborates with the Community Safety Partnership, which is a program that was created in the housing projects of Watts.  In that program, police officers coached youth sports teams and participated in community activities.  The program successfully reduced violent crime and arrests by 50 percent.

“We are taking a successful model introduced in the housing projects and implementing them in a neighborhood,” said City Councilmember Marqueece Harris-Dawson.  “We believe we can reduce violence and we can get police and the community to work together towards a solution.”