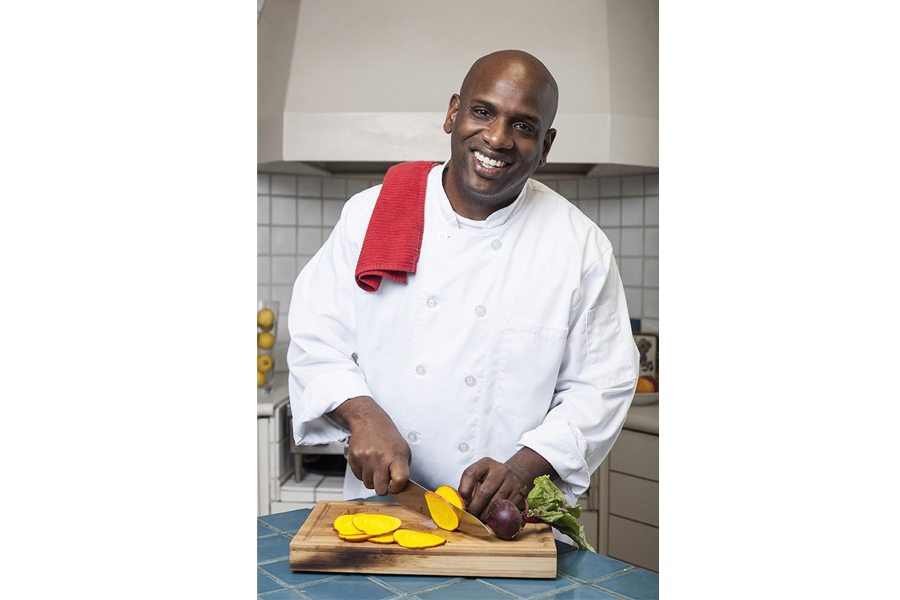 Chef Bryce Fluellen of the American Heart Association is promoting a healthy lifestyle.

Chef Bryce Fluellen is on a mission to educate people about the benefits of maintaining a healthy diet, and the pitfalls of eating a diet that is filled with junk food, unhealthy fat, and added sugar.  He is educating people how to prepare their meals in a healthy manner, and he is also spreading this message to children at their schools.

Fluellen is the American Heart Association’s instructor/educator for their Cook with Heart Los Angeles, Long Bach, and Santa Ana program.

Studies have shown that many health problems can be avoided by making better food choices.

“Eighty percent of heart disease and stroke can be prevented,” Fluellen said.

Heart disease is one of several problems that is the result of an unhealthy diet.  Various forms of cancer and diabetes are also linked to eating unhealthy foods.

The obesity rate in the United States has dramatically risen over the past 30 years.  In 1985, no state in the country had an adult obesity rate higher than 15 percent.  Today there are four states above 35 percent, 25 states above 30 percent, and there are no states below 20 percent, according to The State of Obesity, which is an annual report that raises awareness about the seriousness of the obesity epidemic.

The obesity rate in children is just as alarming.  According to the American Heart Association, 31.8 percent of children in the United States are overweight or obese.  Since 1980, the childhood obesity rates have tripled.  The rates of obese six to 11-year olds has gone from six percent to 17.5 percent.  The rates for teens has gone from five percent to 20.5 percent.  For children ages two to 5-years-old, 8.9 percent of them are obese.

Fluellen points out that many children now have diabetes because of their unhealthy diets.

“Some of that may be hereditary, but a lot of that is because of what they’re consuming,” he said.  “Teachers have told me that they see kids coming into the classroom or they see them walking to school at eight in the morning with a bag of Hot Cheetos and a large Arizona Iced Tea.  They’re getting all of this sugar, and fat, and salt.  It’s nothing that’s sustaining them.  It has no nutritional value.  By the time second or third period comes around, they crash.  They’re not putting quality energy into their body.”

The negative effects of obesity can also affects a child’s life at home.  Fluellen recalls a child that burst into tears when he was given a lecture on heart disease.  He later found out that the student’s father had a heart attack, at the age of 39, a month earlier.

Fluellen says that eating healthy can make a person feel and perform better.  It also lowers the risk of preventable diseases.

“Eating healthier, it helps you feel more vibrant,” he said.  “Your brain is clearer.  Many people will focus on losing weight.  Just by losing 10 pounds you can reduce high blood pressure and you can manage diabetes.  It also reduces your medical costs.”

Fluellen advises people to try to fill half of their plate with fruits and vegetables, to eat healthier fats, and to be mindful about the way that they prepare their meats.

“If you’re going to have chicken, stay away from fried chicken because the flour and oil has a lot of saturated fat and a lot more calories,” he said.  “In excess that can lead to heart disease.  Everybody loves fried chicken, but it should be a treat.  It shouldn’t be consumed every day, or even every week.”

“If you look at a lot of the processed foods at the grocery store, from ketchup to mayonnaise to salad dressing, a lot of that stuff has high fructose corn syrup or sugar added to it,” he said.  “You want to limit the added sugar.”

“When it goes into your system that fiber balances out the intake of sugar,” Fluellen said.  “Something with high fructose corn syrup in it does not have fiber at all.  That can lead to diabetes.”

There is a saying that people should eat their fruit, not drink it.  That is because fruit drinks do not have fiber, and many of those beverages have added sugar.

Many people love soul food because of the amazing tastes, but a lot of those dishes can lead to obesity, heart disease, cancer, and diabetes.  But Fluellen says that this cuisine can be enjoyed in a healthy manner.

“Collard greens have a lot of nutrients, just as much as kale,” he said.  “It’s just the way it’s cooked.  Instead of cooking it with ham or fat, you can cook it with smoked turkey.  Or with a vegetable broth and add onions in it.  Instead of candied yams, you can have mashed yams.  Add cinnamon, a little bit of honey, and olive oil instead of butter.  Instead of fried chicken you can have grilled chicken or broiled chicken.  Or you can do an oven-fried chicken where you’re removing the fat from the oil.  You can add some vegetables to the macaroni, and get a lower-fat cheese.”

Fluellen said that with Internet access, everybody is a Google search away from finding ways to make their soul food, and other cuisines, healthy.

When it comes to people on the go, Fluellen acknowledges that it can be tough to eat healthy.

“Often times when you get hungry it’s too late,” he said.  “When those hunger pangs take over you’re going to stop at whatever is quick, and that’s usually a fast-food restaurant.  Keeping snacks in your car when you’re on the go can help.”

Fluellen keeps nuts in his car, especially almonds and pistachios, which are healthy fats that are high in fiber.  That can give a person the feeling of being full, stopping them from overeating or making unhealthy choices.  He also keeps apples and oranges handy.

Children can also have healthy snacks on hand.  Instead of stopping at a convenience store on the way to or from school to buy some potato chips or candy bars, parents can pack them a bag of nuts and some fruit.

Fluellen has made it his life’s work to make a difference in people’s lives.  He succeeds when people listen to his message, and commit to a healthier lifestyle.