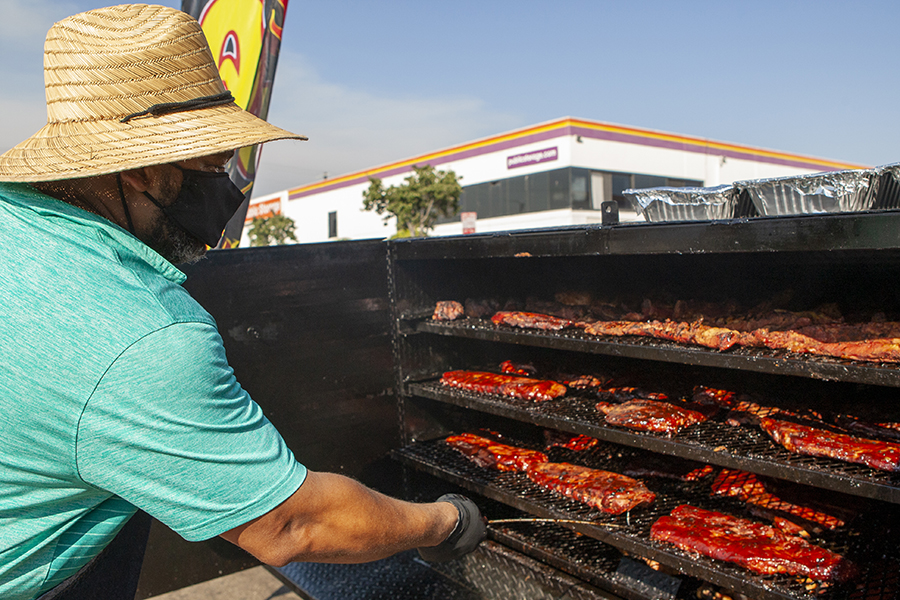 The barbecue is so good you’ll make a U-turn to go back and get some more.

Niles Watson takes his barbecue very seriously, and he’s sharing it with his community at his biweekly popups on Crenshaw Boulevard, just south of Coliseum Street.  He sets up his grill every other Saturday in front of Public Storage.

Watson has a particular taste for barbecue.

“Growing up, I was able to experience some excellent barbecue, but now that I’m an adult, I can’t find it anywhere,” he said.  “I figured that in a city like Los Angeles, anybody should be able to get some food that’s great.  I figured that if nobody else was going to make it, then I should make it myself.”

Watson invested in a barbecue trailer and a truck, and he uses the skills and recipes that he learned from his father.

Watson’s menu is pretty simple and everything seems to be a favorite.

“I keep trying to take things off the menu because it’s easier to cook certain things, but people keep requesting everything,” he said.  The brisket is a big hit.  The ribs are to die for.  I searched far and wide for the best hot links that I could find.  People love those.  People love the chicken, which is usually jerk chicken.”

The sides are mac ’n cheese and baked beans.

Watson grew up a block from USC.  He attended Hamilton High School and he honed his barbecue skills while he was a student at the University of Arizona.  After major events he would barbecue for large crowds.

Watson has a full-time job, so popups works better for him.  He gets the day off from his job every other Friday, and he uses that day to prep for his Saturday popups.

“It takes every minute the Friday before to prepare for the popup on Saturday,” he said.  “I’m usually up all night cooking the brisket, tending the fire, and seasoning the meat.  I really pay attention to detail when it comes to my barbecue.”

Watson also uses the pop ups to teach his nieces and nephews about business, customer service, how transactions are made, meal preparation, and cleanup.   And he gets a lot of positive feedback from his customers.  On several occasions he’s seen customers come back several minutes after they drove off with their orders to pick up more barbecue.