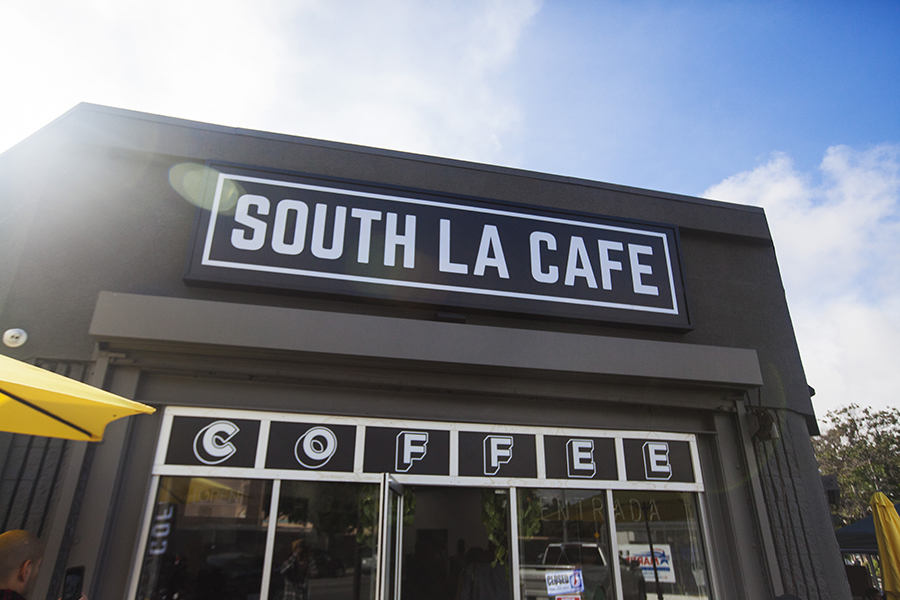 This coffee shop is a safe space for people of color, long-term residents, new residents, and it is also a cultural hub where the history of the community is felt.

As Joe Ward-Wallace was approaching retirement from the Los Angeles Fire Department, he decided to finally get around to the idea of opening a coffee shop.

“I’ve been wanting to do this for about 15-20 years,” he said.  “I just wanted a little 500-600 square foot spot with drip coffee and maybe Costco muffins.  That was it.  Looking forward to retirement, that’s what I wanted to do.”

Joe’s wife Celia, who comes from a family of community activists, had a larger and community impactful plan for Joe’s little coffee shop.

“While he was conceptualizing what it would be like to have a coffee shop, I was thinking about what it would look like to be a safe space for people of color, long-term residents, new residents, and also being a cultural hub where the history of the community is felt,” she said.

South LA Cafe was born out of their combined visions.  The 2,200 square-foot coffee shop sits on the corner of Western Boulevard and Browning Boulevard, just one short block north of Martin Luther King Jr. Boulevard.  They source their coffee beans from Black-owned Red Bay Coffee Public Roastery, which is based in Oakland.  Joe and Celia partnered with Homeboy Industries to provide pastries, muffins, cupcakes, danishes, and cookies.

With the changing demographics in South Los Angeles, the sight of a new coffee shop can be alarming to many people.  In communities that are experiencing gentrification, coffee shops are signs of change.  But coffee shops such as South LA Cafe, and also Hot & Cool in Leimert Park and Sip and Sonder in Inglewood are operated by business owners who have created cultural spaces that are geared toward the current residents of the communities that they are in.

“We felt like we were watching the signs of gentrification and commercial development in historically Black, Latino, and Asian lower-income communities,” Celia said.  “There have been influences coming into the community that are not from people or organizations that have any sense of the pride, the history, and the culture of the community.”

Many of South LA Cafe’s daily customers use the coffee shop as a coworking space.  The shop also hosts cultural events, such as art shows, poetry readings, book signings, open mics, yoga and health classes.  The venue has rooms that can be rented for meetings and special events.

The artwork on the walls of the cafe are all from local artists, and the themes are about South Los Angeles.  One of the most impactful pieces is a large painting by famed artist Mohammed Mubarak of the late rapper and South Los Angeles icon Nipsey Hussle.  There are also other pieces around the coffee shop that feature Nipsey Hussle.

“He has a spot here,” Celia said.  “We feel the energy of his legacy.  We are a family of entrepreneurs, and we believe in social enterprise and giving back to the community.  We believe in mentorship, helping others, and creating generational wealth.”

Joe and Celia went to great efforts to ensure that the look and the feel of the coffee shop was of the highest standards.

“People thought that we were corporate,” Joe said.  “They said that the cafe is so nice and detailed.  But this is just me and Celia.  People walk in here and they can’t believe it.  I tell them to believe.  We’re of this community and we did it for this community.”

Joe and Celia also opened South LA Market, which is in the same shopping center, after a small market closed.

“It was a little WIC market that was about to close,” Joe said.  “That was the only place that I was getting my juice and my fresh fruit from without having to drive down Crenshaw (to a grocery store).”

“We live in the middle of a food desert,” Celia said.  “We live in a community of deep level homelessness and hunger.  So we wanted to do our part to provide affordable access to food and resources.”

South LA Cafe is having early success, and Joe and Celia have a long-term goal of opening cafes in other areas of South LA.