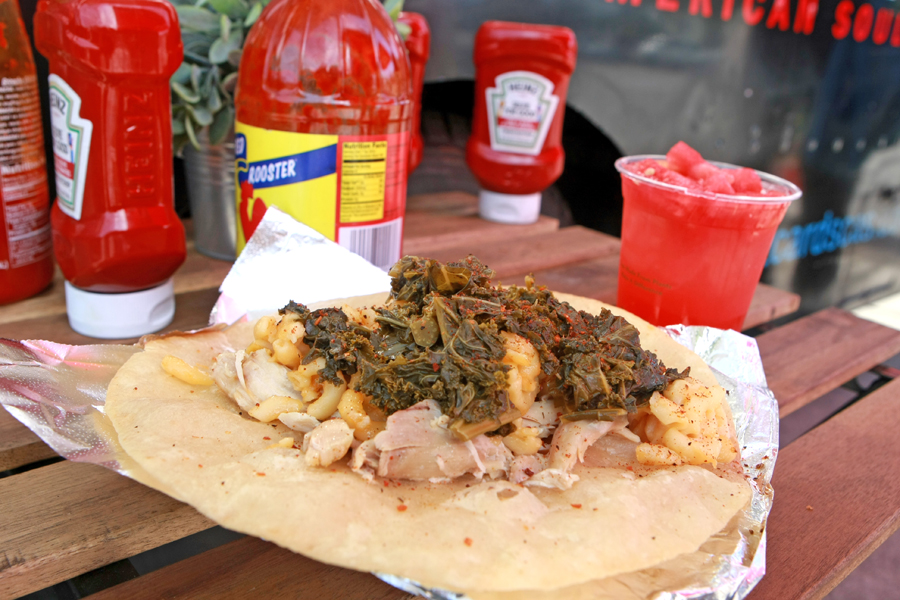 The brisket, macaroni and cheese with kale plate is a fan favorite. Photos by Jason Lewis

The food truck has received rave reviews from critics.

South Los Angeles native Greg King has created one of the best food trucks in the nation.  That statement is not coming from King himself, who had a background in marketing before he created Postcards Central American Soul Food.  That statement is based on the reviews from highly reputable food news sources.

The positive reviews led Postcards to being featured on the Food Network’s “The Great Food Truck Race.”

The popularity of this food truck comes from King creating a unique fusion between soul food and Central American food.

“I used to date someone who is Belizean,” he said.  “On holidays we would cook together.  The flavors of the food came together so well.  So when I was thinking about the concept of the truck, this made so much sense to mesh these two things together.”

The pairing of the two foods was a natural fit.

“In Belize, it’s the seasoning that makes it different,” King said.  “But they have some of the same staples that we (African Americans) have.  From ox tails to chicken to greens, potato salad, and stuff like that.  They do it a little differently, but it all comes together really well.  And then I kind of spice up their thing with the soul food blend.  That makes it even more amazing.”

The brisket, macaroni and cheese with kale plate is a fan favorite.  The baked chicken, macaroni and cheese with collard greens is also very popular.  King believes that he has the only truck in Southern California that serves ox tails.  There are vegetarian options, and sides include dirty rice, sweet potato fries, and plantain fries.  All plates can be ordered as a wrap or a bowl.

Postcards is four years old, but King’s experiences dating back to his childhood have led him to this point.  His parents owned two South Los Angeles soul food restaurants.  He started working for them when he was 12 years old.  After graduating from Howard University and obtaining an MBA from Vanderbilt Graduate School of Business, he owned a marketing company at one point before holding corporate jobs for a number of years.

But at one point, King was ready for a major change.

“I just didn’t want to work for anybody any longer,” he said.  “I’m definitely more entrepreneurial.”

Starting a business can be difficult, but King had a few things going for him.

“Having an MBA from Vanderbilt certainly helps, because it helps you understand business structure,” he said.  “But having parents who were entrepreneurs also helps.  If you saw your parents out there everyday doing their thing, and you knew that they made a living, it makes it easier for you to take those type of chances.  I’ve never been afraid of getting out there and doing my own thing.”

Even with King’s background, he still faced the same challenges that startup companies have.

“After the first few months, I wanted to sell the truck,” he said.  “To invest in these trucks, and build the kitchen, it’s like $100,000.  After the first three months, I was pretty much ready to run out of this, because it was so much work.  But then we started getting these amazing accolades.”

When the reviews of the truck started to reach the public, many people started to search for Postcards’ location.  King’s calendar is filled on a daily basis, so he alerts his followers on Facebook, Instagram, and Twitter where he will be from day-to-day.  Even though Postcards is consistently on the move, they can be found at certain locations on a weekly basis.

“For our customers who are looking for us, and they are chasing us, what we have tried to do is create some locations that are more standard,” King said.

Postcards will be on Slauson Ave. and Overhill Ave. on Thursdays and Fridays from 4 p.m. to 8 p.m.  They are at the Leimert Park Art Walk on the final Sunday of each month, and they are in the Leimert Park Village for major events.  Follow them on Facebook, Instagram and Twitter for their daily location, and visit their website at www.postcardscas.com.