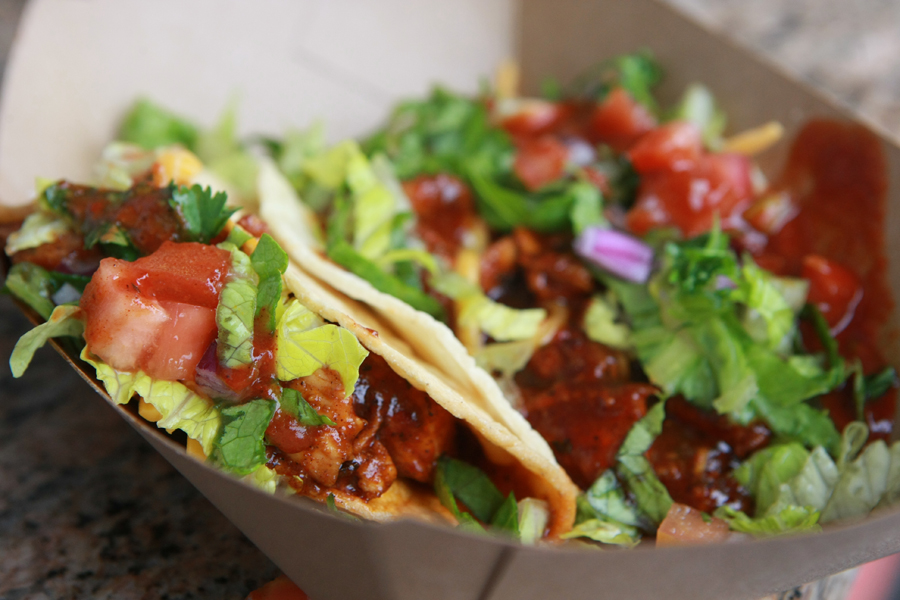 Owner Fredrick Sennie infuses soul food into tacos that many people will wait over an hour for.

There are two common themes on the Yelp reviews for Worldwide Tacos.  The first is that the tacos are amazing.  One reviewer called them ‘magic.’  Just about every review raves about the taste and quality of these tacos that comes out of a small food stand on the corner of Martin Luther King Jr. Blvd. and 3rd Ave.

It only takes one bite to recognize that these are not ordinary tacos.

The other theme is the wait time.  Waiting 30 minutes can be the norm.  Waiting an hour can happen.  And it’s not out of the ordinary to wait even longer.  But even with that issue, Sennie does not have a shortage of customers.  He said that most people place their order and leave their phone number.  He gives them a call when the order is ready.

The wait time can be attributed to the quality that Sennie puts into the product.  His menu has over 196 tacos and burritos on it.  The ground turkey taco is the best seller, followed by the buffalo chicken taco and the shrimp taco.  Sennie uses a variety of meats, including beef, lamb, lobster, scallop, and duck.  He also has vegetarian options.

Worldwide Taco is not like fast food restaurants that have the meat sitting around cooked.  Sennie starts the preparation of the food when a customer places the order to ensure freshness of the meat.

“It takes a lot of time because there are a lot of different tacos with different flavors,” he said.  “I have people come order one of this, one of that.”

One of the keys to building a great taco is starting with quality meat, and Sennie says that he pays extra money to give his customers the best.  The next step is the flavoring.

“I’m going above and beyond what food establishments do,” Sennie said.  “There are some places that use a little garlic powder, or some onion powder, and some seasoning salt.  But I’m making a mixed seasoning.  That’s about 20 different herbs and spices that’s going into your food.”

The flavors that Sennie comes up with are unique to Worldwide Tacos.

“Everything is in-house,” he said.  “Everything I come up with on my own.  I’ve always been good at pairing things, and making different sauces and spices come together.”

Sennie credits his father for passing down the cooking abilities.  His father is from Mississippi, and cooked Southern dishes often.

“I was pretty much raised on soul food,” Sennie said.  “Neckbone, oxtail, short ribs, greens, chili beans.  But tacos were always one of my favorite foods.  When I was young, growing up cooking at home, I used to always make tacos.”

Sennie took what he learned growing up eating soul food and infused that into his tacos.  He also based recipes on foods from other cultures as well.  He makes jerk steak, teriyaki lamb, curry chicken, Thai shrimp, piña colada chicken, and many other exotic variations of tacos.  He also came up with a number of the tacos on his menu.

“Sometimes I sit back and just make up a recipe,” he said.  “Like the blueberry recipe, I was going to do some wings for somebody.  I wanted to do a different flavor.  So I mixed up a sauce with blueberries and a few other things.  Then I was thinking about what I can pair that with.  I mixed it with blue cheese and spinach.”

With the quality of product that Sennie creates, the wait times start to make sense.

“You’re not going to get what I make anywhere else,” he said.  “Just the quality of the food.  You’re getting something in the inner city that you really have to travel and pay a lot of money to get somewhere else.”

Not only are customers of Worldwide Tacos happy with the food that they are getting, food critics have taken notice too.  The taco stand was featured on the Cooking Channel’s show The United Tastes of America.  Sennie was also invited to The Taste, which is the Los Angeles Times’ yearly food festival.

Sennie is working on the wait time issue.  He is having an app created where customers can order and pay from their phone, and get an alert when the food is ready.

Worldwide Taco is located at 2419 W. Martin Luther King Blvd.  Contact them for catering at (323) 291-1500.  Visit their website at www.worldwidetacos.com to view their menu.