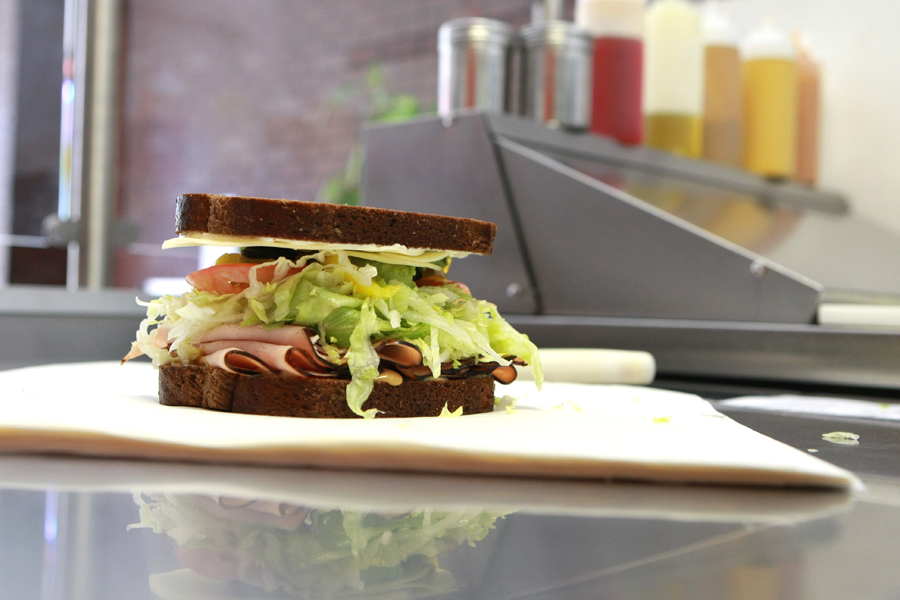 The Leimert Park eatery does not spare expense for its great-tasting sandwiches.

There are many differences between the food cultures of Los Angeles and New York.  That is evident when it comes to food that people grab on the go.

“You guys out here (in Los Angeles) grew up on tacos, we grew up on sandwiches,” said Hakeem Dolphin.

Dolphin is from Brooklyn, New York, and his wife Remmi is from Queens, New York.  They moved to Los Angeles in 2008, and they quickly figured out that the food scene on the west coast was different from where they are from.

“We looked around and was like, ‘man there’s nowhere to get a good sandwich,’” Dolphin said.  “Not unless you go to the Westside.  You have a couple of nice spots to get a great sandwich.  But over here (Crenshaw area), you can get some sandwiches, but not like Brooklyn style where you can build it how you like.”

Dolphin points out that there are a number of commercial sandwich shops in the area, such as Subway and Quiznos, but those places were not the same as a New York sandwich.  That led the Dolphins to open Brooklyn Deli & Mini Market in Leimert Park.

Before they made the decision to open the deli, they looked at other sandwich shops on the Westside, and they thought that those delis were doing well.  That sparked their interest to go into business for themselves.

The Dolphins separated this deli from the commercial sandwich shops and other fast-food eateries by investing in quality ingredients that are as fresh as possible.

“I’m at the market every morning,” Dolphin said.  “We don’t even have a freezer.  We don’t freeze anything, so everything is fresh and from that day.”

The Dolphins do not buy their ingredients in bulk to ensure the freshness of their products.

“Meat disappears quickly,” he said.  “We get a delivery every week with the meat.  The shelf life on it is about two months, but we only buy enough for a week.  That makes sure that it’s always fresh.  Nothing is just sitting around.”

Brooklyn Deli also takes great pride in the way that they build their sandwiches.

“We don’t even pre-slice,” Dolphin said.  “Slicing the meat and putting it in the refrigerator kind of dries it out a little bit.  We’re giving it to you right off of the cut of meat, because that’s how fresh we want the sandwich to be.  When you order it, we slice it.”

While many eateries will cut costs by using cheaper ingredients, Brooklyn Deli spends the extra money to please their customers.

“A big thing is the mayo,” Dolphin said.  “We use a really high quality mayo.  You can go to the wholesale market, they have sections of the stuff that you can use.  In most places I see that the cheap mayo sells out.  The good mayo never sells out.  But it’s the most expensive because it’s the best.”

Breads include rye, sourdough, French roll, wheat, and they have a spinach wrap.  Their dark sweet wheat bread is the best seller.

One of the best selling sandwiches is the Remmi’s Favorite, which is a maple turkey on sweet wheat bread, with lettuce, tomatoes, pickles, banana peppers, olives, avocado, mayo and honey mustard.

Another top seller is the Happy Thanks Giving, which has cranberry cheese and cranberry sauce.  Dolphin said that people love the cranberry sauce on that sandwich.  He also said that the Hot Wing sandwich is very popular because of the sauce and blue cheese crumbles.

There are vegetarian and vegan options.

“We do these hot portobello mushrooms with red peppers in a garlic hummus,” Dolphin said.  “People love that hummus.”

The Dolphins took great pride in creating their specialty menu.  They paid attention to what their customers liked, and they also were creative.

“With a lot of those sandwiches, it was really like an inspirational thing,” Dolphin said.  “Like the mango madness sandwich.  This lady posted on Instagram a mango chipotle chicken breast cooked in the oven.  And I was thinking, ‘how can I turn that into a sandwich?’  We have chipotle chicken, so I found the best quality mango spread, and that sandwich is one of the best sellers.”

There is a kid’s menu that includes a peanut butter and jelly sandwich.  Surprisingly that sandwich is more popular with adults.  Another childhood favorite that adults are enjoying is the Sloppy Joe.

“We make homemade turkey chili that we make from scratch every morning,” Dolphin said.  “I’ll take a french roll, cut out the middle of it, and then fill it with the chili.   You can get cheese, onions, or whatever you want.”

The Dolphins have created great products, and the community has responded to them.  They have reached their two year mark in business, and their Yelp reviews are amazing.  Out of 116 reviews, they have received 107 five-star reviews.

Brooklyn Deli offers catering, and they have worked with Metro, the Los Angeles Rams, and Kaiser Permanente.  They also deliver on orders over $20.