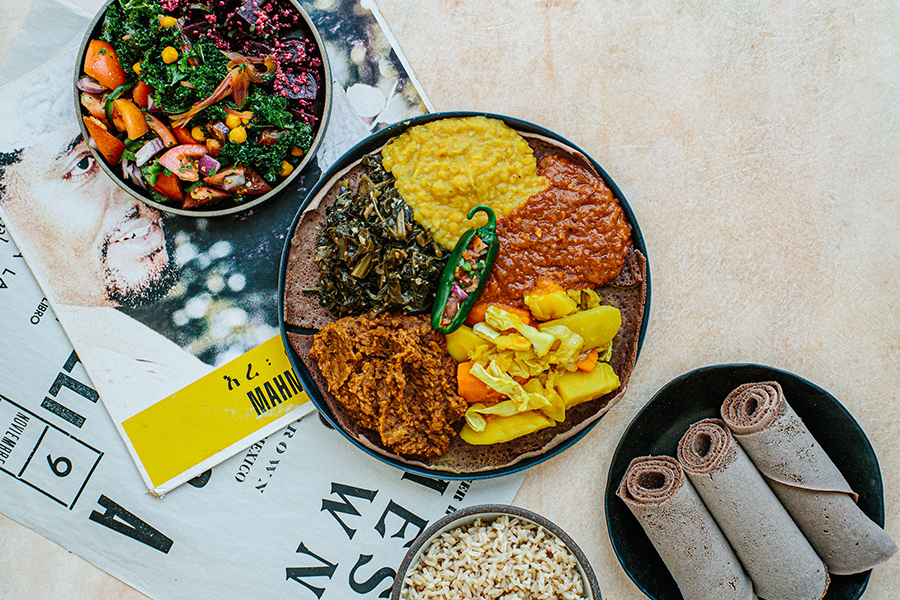 Both vegans and non vegans enjoy the plant-based cuisine at Azla Ethiopian Vegan, which is on Leimert Boulevard, just south of 43rd Street.

Mother and daughter Azla Mekonene and Nesanet Abegaze are serving amazing plant-based Ethiopian fusion dishes at Azla Ethiopian Vegan Eatery in Leimert Park.  This is one of only a few vegan restaurants in Black communities of Los Angeles, making this a go-to spot for people who are on strict plant-based diets.  But non-vegans also love the food at this eatery.

“I’d say that the vast majority of our customers are not vegan,” Abegaez said.  “They are not on a strict plant-based diet, but are people who want to be healthy and who want to feel more energized.  We’ve had people who are not vegan who come several times a week because it’s just good food.”

Many people who consume meat and animal products have misconceptions about what vegan food is.

“I think that unfortunately the way that vegan food is marketed is that it’s an exclusive, expensive, kind of food unique to certain communities, but it’s really not,” Abegaze said.  “Our food is very soulful.  It’s comfort food.  It has a nice mix of colors and is vibrant, and it’s something that speaks to all of the senses.  From the smells and spices, and the textures.”

The inspiration behind the menu comes from Chef Azla.

“The foundation for all of the recipes comes from my mother and my siblings as we interpreted Ethiopian flavors in the diaspora,” Abegaze said.  “We started off with a traditional Ethiopian menu, and have recently transitioned to an Ethiopian fusion breakfast and lunch menu.  We’ve put our spin on classics with dishes such as Misir Cheese Fries that features spicy lentils and our Kitfo Impossible Burger made with our plant-based kibe, a spiced butter.”

Converting the Ethiopian dishes to plant-based was pretty simple, and it’s something that Abegaze and her family incorporated into their diets several years ago.

“A couple decades ago my older brother, being the pioneer in the family and a Rastafarian, switched to a plant-based diet, and slowly, all of us in the family for our own reasons began to reexamine what we were eating, and we all started to switch to an all vegan diet,” she said.  “While my mother had to make some adjustments, the reality is that we are Ethiopian of the Ethiopian Orthodox faith.  So that vegan plant-based diet is actually a big part of the culture because there are a lot of fasting periods.  And every Wednesday and Friday you’re also on a plant-based diet.  So if you really add it up, it’s something like 200 days out of the year that adherents of Orthodox Christianity abstain from meat products.  So there’s actually more days out of the year that people are eating plant-based diets than not.  So it wasn’t a huge jump where we had to completely change everything, and figure out how to make everything plant-based.  Because the reality was that when we were growing up, this is what we were eating.  We were eating red lentils, curry potatoes, carrots, cabbage, greens.  The beef and the chicken was really more of a celebratory food if we were having guests or on the weekend.”

The popular dishes at Azla Ethiopian Vegan are the Spicy Carnitas Burrito made with Awaze (an Ethiopian hot sauce), Ful (a mashed fava bean stew), and the Impossible Burger.  The typical American is accustomed to the taste of meat-based dishes, so Azla Ethiopian Vegan does have dishes that people recognize.

“We love to play in the idea and space of fusion foods,” Abegaz said.  “So we have experimented with Taco Tuesdays and other ways to make Ethiopian food more accessible to our surrounding community.”

Many of the customers are vegan, and Azla Ethiopian Vegan gives locals in Black communities a place to go that is close to their neighborhoods.

“We were tired of having to drive to the Westside, or to Northeast L.A. to get some good healthy food.  So we decided to do this right in our neighborhood.”

Studies have shown that there are health benefits to a plant-based diet.

“For me it’s about energy,” Abegaze said.  “I believe that food should give you energy rather than making you feel dull and drained.” 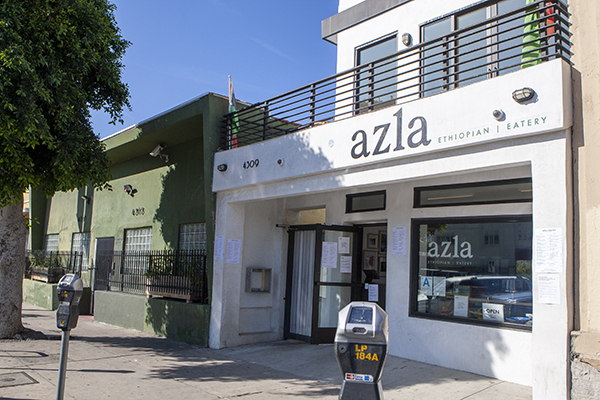 Azla Ethiopian Vegan is located at 4309 Leimert Boulevard.  For more information, visit www.azlavegan.com and follow them on social media.