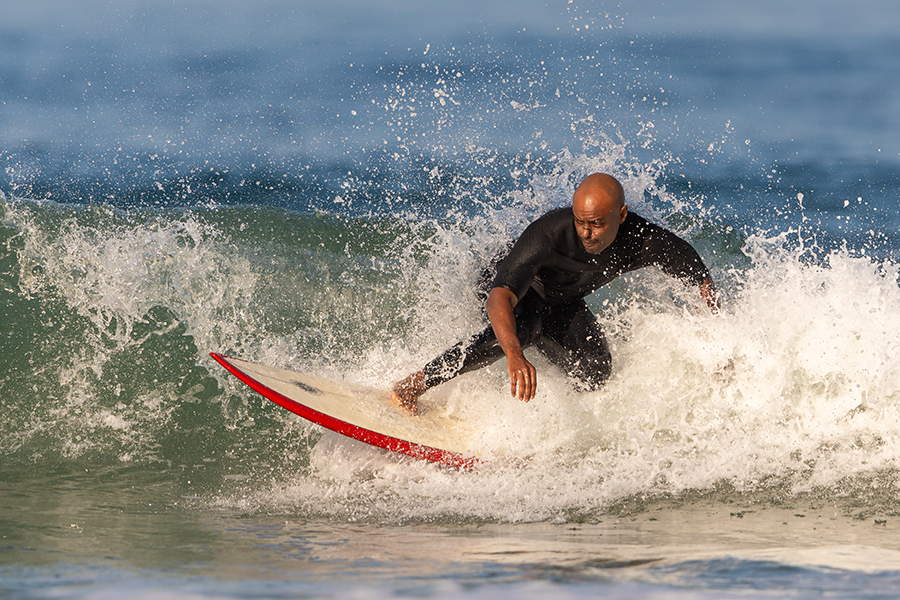 Paul Cooper learned how to surf when he was 34 years old. Now he hits the waves a few times a week. Photo Courtesy of Paul Cooper

Cooper has seen an increase in Black surfers since he took up the activity and he believes that getting over a fear of the ocean would bring more Black people to surfing. 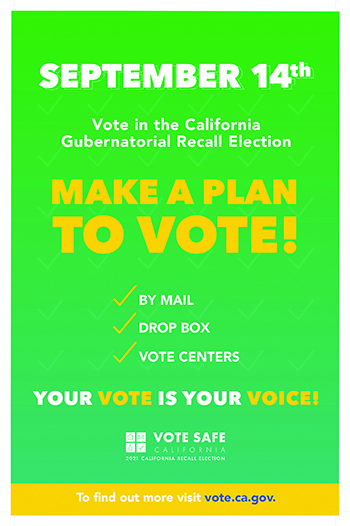 Surfer Paul Cooper makes the pretty short early morning drive to El Porto Beach a few times a week to have what he considers to be a magical experience.

“It’s a beautiful feeling to actually get up on a wave,” he said.  “The wall is there and you’re going up and down, just riding that wave.  There’s nothing…nothing like it.  It’s like magic.  That’s why I keep coming out here.  I make it a point of coming out here every weekend.”

El Porto Beach is at the northern portion of Manhattan Beach, and without traffic, Cooper can get there quickly from his home in Inglewood.  He also surfs at beaches up and down the Southern California coastline.

Cooper’s journey into surfing began in 2004, when he was 34 years old.  While on a vacation in Hawaii, he and his wife Claudine purchased a parasailing and surfing package, and they were given a basic intro to surfing lesson.  He loved it so much that he purchased a couple of learning to surf books.  After returning home and having read the books, he headed to El Porto Beach, rented a 10-foot surfboard, and then he quickly figured out that he was no longer in Hawaii.

“I probably looked crazy because I didn’t know what I was doing,” he said. “ This water out here is not Hawaii because it’s freezing.  And I had on board shorts and a regular t-shirt.  People were asking me if I was cold, and I’d say that I was good.  But I was actually freezing.”

Pretty soon Cooper purchased a surfboard and a wetsuit, but he was still figuring out the etiquette out in the water, as he found himself in the way of the more experienced surfers.

There are mental and physical benefits to surfing, which Cooper experiences both of.

“I find peace out here, plus I like working out,” he said.  “This right here is a different type of workout because it’s not like the gym.  You just come out here with nature, and you’re battling this ocean.  It will work you over some days, and some days it’s giving you gifts all day long.  Just beautiful waves all day long.

“I prefer doing this than standing on a treadmill, running in one place.  But this is different.  You’re going to be working your back, your arms and shoulders, your legs.  It’s a full body workout when you get to paddling and chasing those waves.”

When Cooper started surfing in 2004, he didn’t see too many other Black people out there in the water.  He said that over the years he’s seen more Black people pick up the sport, but they’re still in the minority.  He made an interesting observation as to why many Black people, who live within 15 miles of the Pacific Ocean, have not shown any interest in surfing.

“I think that it’s a fear of the water,” he said.  “From my conversations with a lot of folks, they don’t want to be in the ocean.  We don’t even get in the pool at pool parties, and there’s nothing in there but chlorine.  It’s a whole ‘nother thing to say, ‘Let’s get in the ocean past our knees.’   There’s sharks, dolphins, sea lions.  There was a sea lion out here yesterday trying to find food, or doing whatever they do out here.  It was kind of like a stray dog running around.”

Getting over that mental hurdle can lead people on an amazing journey.

“Once they get past that and get in here, there will be no turning back,” Cooper said.  “It’s work to learn how to surf, and it’s work battling these waves and this ocean.  But once they get past all of that and you got on that wave, and you’re just careening down that wave, you’re so connected and so dialed in, it’s ridiculous.  These waves are addictive.”

Cooper recommends that beginners take lessons, opposed to learning on their own like he did.  Compared to other sports and activities, surfing is not too expensive.  Renting a surf board is about $20.  Buying a used surfboard, which Cooper recommends for beginners, is about $100.  A brand new surfboard can be anywhere from a few hundred dollars to well over $1,000.  Cooper said that a good wetsuit, which is needed for the Pacific Ocean, is about $250, but a less expensive one can be purchased for about $100.

“The rest of it is free,” he said.  “The beach is free.  You may have to pay for parking at some locations.”

While Cooper picked up the sport as an adult, he said that it is a good activity for children to learn.

“This is wonderful for kids,” he said.  “The age range is when they’re strong enough swimmers.  I’ve seen people bring toddlers and have them on surfboards.  If you give a kid a surfboard and put them in the water, they’ll take to it quick.”

There are local Black surfing organizations that hold events, have lessons, and promote the sport to Black people.  The Black Surfer Collective sponsors family-oriented activities that get folks down to the beach to share their love of the water.  Through these seaside events they hope to engage public interest in the sport of surfing, history, beach culture and ocean stewardship.  Visit their website at www.blacksurferscollective.org and follow them on social media.

Black Sand Surf is a surf and arts collective that believes that the surf culture is ready for a renaissance of inclusivity, peace, and accountability amongst all humans who share the ocean.  Visit their website at www.blacksandsurf.com and follow them on social media.

Color the Water is a defiant, joyful and anti-racism, BIPOC community of surfers.  They have surfing lessons and events.  Visit their website at www.colorthewater.org and follow them on social media.