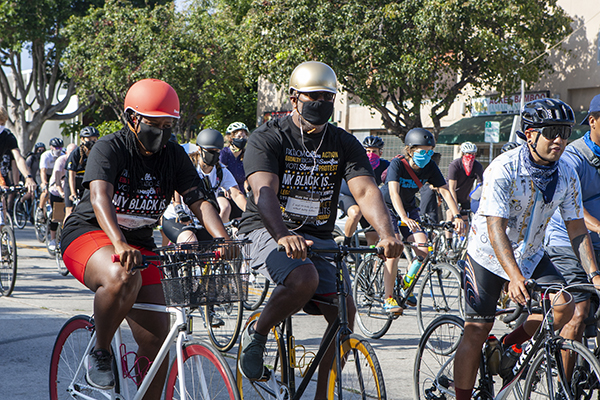 Gyms are still closed, so many people are getting together for large group rides and joining cycling clubs in the greater Los Angeles area.

The COVID-19 pandemic has shutdown gyms around the world, but that hasn’t stopped people from figuring out ways to exercise.  Especially here in Los Angeles, where bicycle paths can lead people from the sunny beaches to the wilderness mountain areas.

Most people know how to ride a bicycle, so it has become a popular choice by many as their main form of exercise.

“We’ve seen an explosion of cyclists,” said Ade Neff, owner of Ride On! Bike Co-Op in Leimert Park Village.  “A lot of people are back on bicycles.  A lot of people grew up riding bikes, but then became an adult and didn’t get on a bike so much as they were working their 9-to-5 job.  What COVID did was slow a lot of people down, and a lot of people are sitting at home.  They needed to figure out how to get out.  They can’t go to the gym, so the best thing for them to do was either get out and run or get on a bike.”

Bicycles have become so popular that it has been hard to find a new one lately.

“There’s a bike shortage everywhere,” Neff said.  “I think Target, Walmart, and Big 5 were probably the first places to run out of bikes.  Because their bikes are generally under $300 or $400.  People will spend that comfortably on a bicycle.  The least expensive bikes were the first to sell out.”

The pandemic has shut down many social activities, so many people are getting together for rides around the city.

“A lot of people are riding with groups,” Neff said.  “We’ve seen people ride with groups of at least 100 people.”

RideWitUs Bike Club & Shop (@ridewitus_la on Instagram), Ride for Black Lives (@rideforblacklives), and Brothas on the Move (@brothasonthemove) hold several rides around Los Angeles throughout the month.  Some of the meetups begin at Ride On! Bike Co-Op.  With the pandemic, these groups have given people a social outlet.

“We’ve all been shut down and our lives have been altered in so many different ways, so from the social standpoint it’s been a necessity in our community for a long time,” said Kellie Hart, founder of RideWitUs Bike Club & Shop.  “The positive energy that’s shared within our rides just makes it a beautiful experience to be a part of and it’s a way to meet new people.  One of the things that I stress on each ride is to meet somebody new.  It’s a great atmosphere for friendship, networking and an all around good time.”

For the more competitive rider, Major Taylor Cycling Club Los Angeles, named after the first Black world champion in any sport, welcomes people of all abilities.  They hold regularly scheduled club rides and weekly training sessions.  There are also advanced rides for those looking for a challenge.

Physically, cycling is one of the best forms of exercise.

“The cardiovascular benefits of cycling are well documented,” said Marty Blount, president of Major Taylor Cycling Club Los Angeles.  “It is great for weight loss and weight management when combined with other healthy lifestyle choices.  It is recommended for control of chronic conditions including diabetes.  Cycling is a low impact sport and people with joint issues report no or very limited issues from cycling.  The mental health benefits are many.  It is a very social sport that helps develop relationships.  It can be a family activity.  Solo cycling has its own benefits - cyclists speak of the meditative opportunity solo cycling provides.”

There’s really no age requirement with cycling, making it an activity that the masses can participate in.

“Major Taylor Cycling Club Los Angeles has members from 20 to 80 years old,” Blount said.  “In comparison to other sports we believe cycling allows people, particularly older folks, to perform at a higher level with more intensity for longer periods of time and more frequently.”

Los Angeles has a variety landscapes to ride through and communities to explore.

“The Los Angeles area is full of places and things to see and there is no better way to see them than on a bike,” Blount said.  “We go up and down the scenic Pacific Ocean coast through the beautiful Palos Verdes Peninsula in L.A. County and the amazing Back Bay in Orange County.  We ride the beautiful Santa Monica and San Gabriel mountains.  We have rides through the urban landscape: Venice, Santa Monica, Malibu, West LA, Carson, Long Beach, Hollywood, Pasadena, Santa Anita, Anaheim, The Crenshaw District, China Town, East L.A. the South Bay cities.”