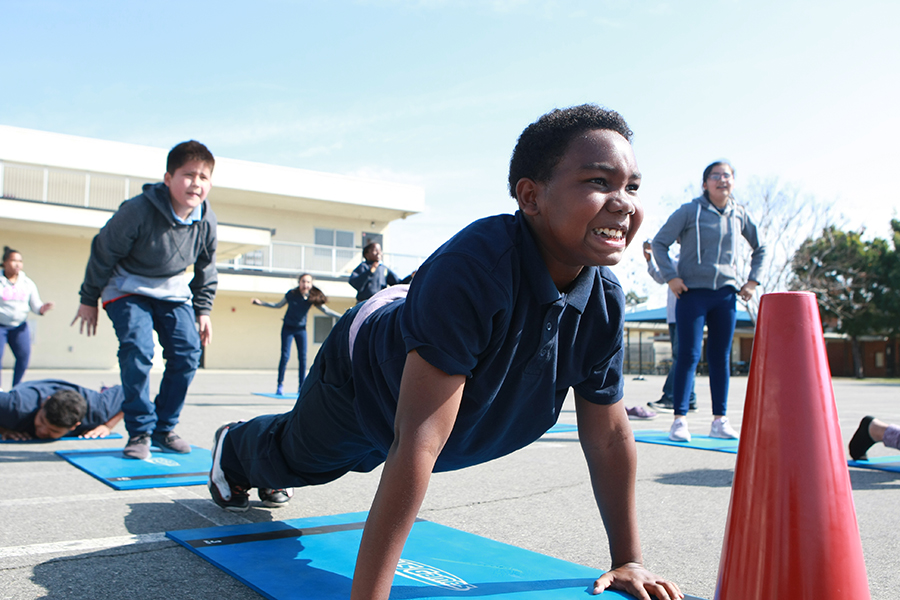 The amount of children in the United States who are overweight or obese has risen at an alarming rate since 1980.  According to the American Heart Association, 31.8 percent of U.S. children are overweight or obese, which is roughly three times higher than 40 years ago.  The rates of obese six to 11-year olds has gone from six percent to 17.5 percent.  The obesity rates for teens has gone from five percent to 20.5 percent.  For children ages two to 5-years-old, 8.9 percent of them are obese.

The statistics are even worse for Black and Latino communities, including in Inglewood.

“The data that we assessed when we were doing our research said that Inglewood children were at an obesity rate of 26 percent, compared to a national average of 18 percent,” said Chef Bryce Fluellen, American Heart Association’s instructor/educator for their Cook with Heart Los Angeles, Long Beach, and Santa Ana program.

Fluellen has been on a mission to educate people about the benefits of maintaining a healthy diet, and the pitfalls of eating a diet that is filled with junk food, unhealthy fat, and added sugar.  He is also an advocate of physical fitness, which has led the American Heart Association to partner with the NFL Foundation’s NFL PLAY 60 program, which is the football league’s national youth health and wellness campaign to encourage children to get physically active for at least 60 minutes a day.  The Inglewood Unified School District, Los Angeles Rams, and the Los Angeles Chargers are also partners.

Out of this partnership came the Inglewood Active Communities Collaborative, which administers physical education (PE) classes at four local elementary schools.  Hudnall Elementary, Bennett-Kew Elementary, Beulah-Payne Elementary and Woodworth-Monroe Elementary were selected for this pilot program, and the goal is to bring these PE classes to all Inglewood elementary and middle schools in future years.

“The premise of the NFL’s program is that in order for kids to lead a healthy life long term, they need to be active for at least 60 minutes a day.” Fluellen said.  “Physical fitness along with healthy eating are two of the best ways to prevent childhood obesity and lead a healthy lifestyle.”

Through the Inglewood Active Communities Collaborative, a professional trainer holds a PE class for 5th graders once a week at each of the schools.  Students in the 5th, 7th, and 9th grades take a physical wellbeing test which tests aerobic capacity, muscle endurance, flexibility, and strength.  At the four schools in the pilot program, only about 30 percent of the children in previous years were passing the test.

This program is important because many school districts have cut out PE programs due to budget cuts.

“PE has been pulled out of a lot of schools, and most schools, particular in Inglewood, only have a few PE teachers,” Fluellen said.  “That’s something that we’ve been seeing over the last couple of decades.  It’s not just exclusive to Inglewood.  With school budgets being cut back, a lot of times PE and PE teachers get cut.  Every teacher has a speciality.  Sometimes when you put PE on a teacher who’s specialty is science or math, you’ll see that some of the kids will not perform.”

Studies have shown that children who are more active and have a normal body weight will have a greater chance of leading a healthy and physically fit life as an adult.

“When you look at childhood obesity, and the ramifications that it can do to the body long term; not only heart disease, diabetes, etc.; it’s important to lay a foundation in young people of the importance of physical activity,” Fluellen said.  “Our bodies need to move.  Today in the digital age, it’s great that we have access to information, but that also brings a sedentary lifestyle.  We’re trying to disrupt that during their school day.”

This program began with the four elementary schools during the fall semester, and even with just one day of training a week, the children’s fitness levels are improving.

The PE classes have a mix of long-duration exercises, such as long distance running, and high impact exercises.

“I came in with a game plan that we were going to run, do push-ups and sit-ups,” Nicole said.  “But to keep everybody interested, we also play sports.  We introduced them to different sports that they probably wouldn’t have played.”

“Every week we do something new,” said Seraiah Alpert, a 5th grader at Hudnall Elementary.  “Sometimes we practice for our PE test by doing push-ups, sit-ups, and arm exercises.  One day we had a rugby professional come to the class.  We play basketball, hockey, and football.  Every week it’s something different.”