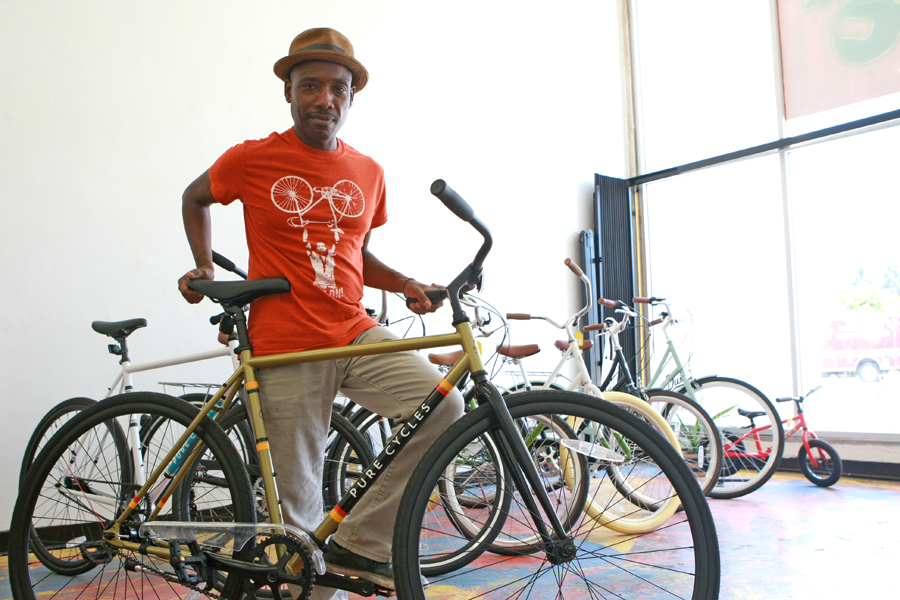 This co-op performs repairs, assists people in repairing their own bikes, and sells new bicycles.

There has always been a bicycle culture in South Los Angeles.  Groups such as Major Motion Cycling Club, who take long rides on road bikes, and Real Rydaz, who customize their bicycles in a similar fashion as lowrider cars, have been in existence for decades.  Many people ride bikes around their neighborhoods, or have an old bike sitting in their garage.  But one issue for years has been that there are very few places to purchase or repair bicycles in the area.

Ade Neff, a bicycle enthusiast, was having that problem.  Born in Haiti and raised in Boston, Neff has lived in Los Angeles for nearly 30 years, and he has bucked the car culture trends in favor traveling around the city on his bike.

Neff had to travel outside of the community to get his bicycle repaired.  Many cyclists go to bicycle cooperatives (co-op), where they can rent tools and get assistance from volunteers to repair their own bikes.  The closest co-op to South Los Angeles was Bikerovave, which is in Mar Vista.

“I used to go there to fix my bicycle, and I thought, we need to have a place like this in South L.A.,” Neff said.  “So I’d tell people that we need to have a co-op, but I didn’t think that I would be the one to do it.  I just thought that if we had one, I wouldn’t have to go eight miles out.”

Neff started his own bicycle co-op in front of the Vision Theater and KAOS Network in Leimert Park Village.  Twice a month on Saturdays, he would set up shop on the sidewalk, and he would help people fix their bicycles for free.  He was living in Culver City at the time, and hauling his equipment on his bicycle became a chore, so he wanted permanent shop.

Neff found a home for his co-op half a block away on Degnan Blvd., right between The World Stage and Barbara Morrison’s California Jazz & Blues Museum.  He partnered with Damon Turner, who has over 20 years of experience on the retail side of the bicycle industry.  Turner also trains children to compete in cycling.

“I think that there is a space and a need for both a shop where people can buy bicycles and all of the gears and equipment that they need, and also a space for a co-op” Neff said.  “I always felt that the co-op should be able to sustain itself.  One way for it to do that is to sell bicycles, tubes, tires.  To function like a shop.”

Bikerowave helped Neff get off the ground by donating tools and equipment, and he was able to open Ride On! Bike Co-Op earlier this year.  This full service bike shop performs tune ups and repairs, and it also allows people to come in and fix their own bikes.

“It’s amazing how many people are coming by and are excited to have a bike shop in the community,” he said.  “There are a lot of people in the community with bikes in their garage that are rusted and have flat tires.”

Ride On! is not just a bike shop.  Neff sees it as being the hub of the South Los Angeles bicycle community.  He has a bicycle education clan which teaches people how to properly navigate their way through traffic so that they can have safe rides, and he teaches people how to maintain their bicycle.

Neff hosts a community ride on the final Saturday morning of the month.  Last month’s ride started at Ride On! and traveled to Exposition Park and back.  That was more of a leisure ride that people of all ages and experience levels can participate in.  Neff will have more advanced rides for experienced riders.

“There have been a lot of groups in L.A. that have been in the bicycle culture for a long time, but what we haven’t had is the infrastructure that lets you know that people are out here riding bicycles,” he said.  “If you go to grocery stores, you wouldn’t have a place to lock up your bike.  In South L.A. we didn’t have bike lanes.”

Neff recalls a time when he went to a local bank, and the security guard told him that he could not take his bicycle inside.  But there was no bike rack for Neff to lock his bicycle to, and the security guard said that he was not responsible if the bike was stolen while Neff was in the bank.  Neff has had bike racks installed in a few locations in Leimert Park, and he’s working to get more installed throughout the community.

Neff also works with Los Angeles Metro’s First/Last Mile program, which is improving the infrastructure of the city for bicycle riders.