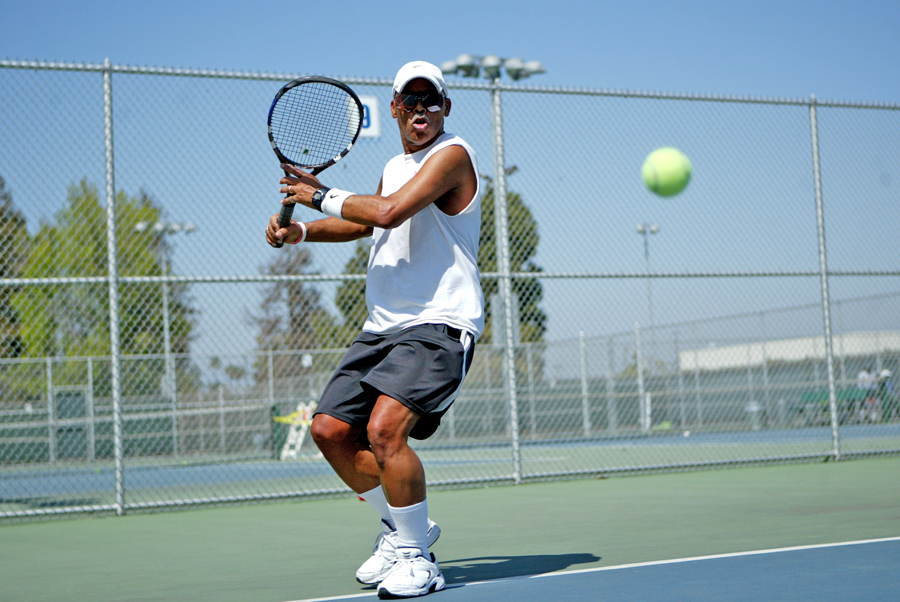 "Stock Tec" is 62-years-old and has been playing tennis for nearly 40 years. He usually plays against the younger guys because he is still quick on his feet, and in great shape. Photo by Jason Lewis

Drive down Rodeo Rd., right by the Rancho Cienega Sports Complex, and you will see several people, at nearly any time of day and well into the night, chasing down little yellow tennis balls that are traveling at extremely high velocities, and they are slicing the balls right back at their opponent.

The games are fun, they are competitive, and it is a sport that is keeping a lot of people in Los Angeles, young and old, in great physical condition.  One such person goes by the nickname Stock Tec, who is 62-years-old.  He picked up the name while trading on the stock market.

Stock Tec attended Dorsey High School before going to college at UCLA, and he has been playing tennis since he was 23-years-old.  He used to play in USTA tournaments, but now he just likes to dominate people in his age group, and see if he still has it against the younger generation of players.

"I'm pretty quick on my feet, and even at this age I still have a relative amount of quickness compared to others my age," Stock Tec said.  "I'm 60 now, but I don't really match the profile of most of my contemporaries, because a lot of people that I know, they couldn't even get out here and play.  My whole thing with tennis was to have something that I could continue to exercise with."

Stock Tec picked the perfect place to get in his exercise.  Venus and Serena Williams fine-tuned their games on these same courts when they were playing in the youth divisions, and the Rancho Cienega Tennis Club has won national championships.  But what he really loves about the courts is that they are public, opposed to private, so anybody can show up and play for free.

"What's nice about the club is that you can always get a game out here," Stock Tec said.  "Seven days a week."

With the stadium lights, Stock Tec said that “it's like daytime out here at night."

Even though a lot of the players on the court are older, and many of them are retired, they are still very skilled, and they use the sport as a way to stay healthy.

"What drives me now is that it's a great exercise," Stock Tec said.  "We play a lot of doubles out here, simply because a lot of people are up there in age, and they don't run as well.  But if you hit a ball to them, they can really clock it.  They were great players in their time, and they can still play really well."

For some of them the competitive spirit is still alive and well.

"My preference, even at this age, is to play more singles," Stock Tec said.  "I want to use the whole court, and I can still run, so I want to get away from my contemporaries and play with younger guys.  There are some guys out here in their 20s, and they hit really hard.  I can actually hold my own with those guys.  They make me really run and keep my game up."

Stock Tec also points out that the women are very good on the courts, and many of them will beat the men.

The best players show up late in the afternoon, around five o'clock, and they tend to draw a crowd of spectators who want to watch some good tennis matches.  For beginners there are instructors who can teach just about anybody the skills of the game, no matter what the age bracket is.  Stock Tec does warn though, people should make sure that they read the posted signs so that they can follow the proper etiquette of the courts.

For anybody who is interested in getting in a good workout while having fun, this could be the right sport, and the courts at Rancho Cienega Sports Complex are the perfect place to play.