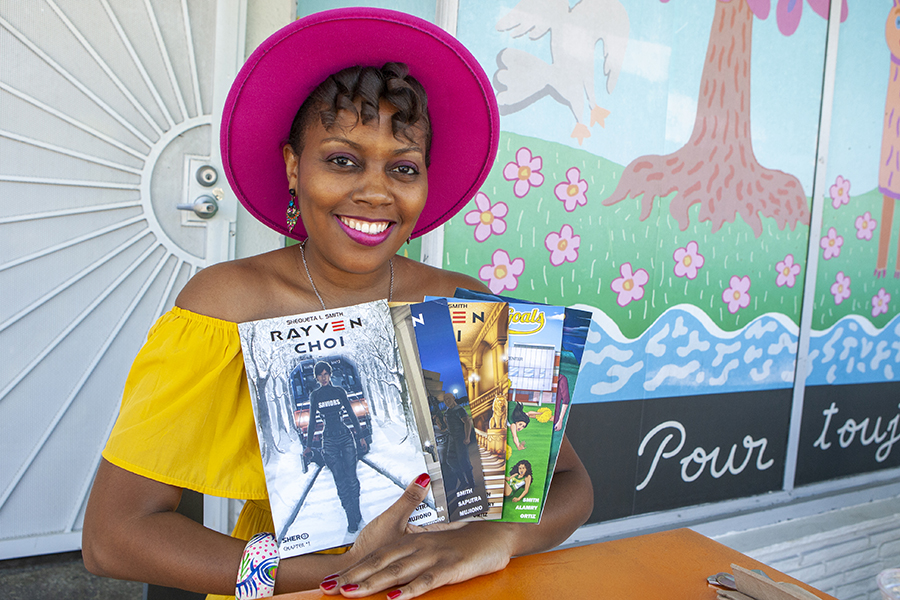 Shequeta Smith created the Shero universe because she did not see very many Black women in lead roles in the comics or in film. Photos by Jason Lewis

Shequeta Smith created a comic book series and a comic book convention that centers around a Black female character.  The “Rayven Choi” series could become a live-action television show.

Screenwriter Shequeta Smith walked into a comic book store looking for a comic book with a Black woman on the cover.  After not finding one, she asked the store clerk if he could find one for her, but he did not know of any.

Smith decided to be the change that she wanted to see, so she created Shero Comics.  In 2016 she released the first book in a series called “Rayven Choi.”  This series, which has produced four books so far with a fifth book coming out this year, is about a Black woman who is a bounty hunter.

Rayven Choi’s likeness is based on a Black woman’s appearance, which led to an issue about how beauty is perceived in an industry that mostly has White characters in lead roles.

“The first artist I hired to draw the cover, he was making her look like Jessica Alba (whose mother is of Danish and French roots and her father is Mexican American),” Smith said.  “And I was like, ‘that ain’t her.’  This character is loosely based off of myself.  So I said that her nose needs to be bigger, and her lips need to be a little bit more full.  And he told me that he was trying to keep her beautiful.  And I was like, ‘here’s your money, give me the files, and you’re fired,’ and that was it.  It’s like that’s what we’re up against.  People who don’t see value in Black women especially.  That made me want take the reins and make it happen even more.”

Smith is proving that a Black woman can be the lead in an action series.

“Rayven is a bad ass, but they don’t show us like that in television or movies,” she said.  “I don’t know if I can name five movies where a Black woman is the lead, other than Blaxploitation films, where she’s a martial artist, she’s kicking butt, and she can handle a gun.  I get to do that in the comics, and I have free rein to do that on my own.  Where in the film world, we’re still working up to that.  So I’m creating intellectual property that the film world can come after.  I’m creating this so that it can become an empire.”

The success of “Rayven Choi” has led Smith to create other Shero Comics series that feature Black women and women of color.  “Squad Goals” is a series about a cheerleading team, and “The Legend of Cahokia” is a Native American version of a “Jumanji”-type story.  Smith is making a prequel series to “Rayven Choi,” and she’s working on an Afro-Futurism comic series, which will have a storyline similar to “The Terminator.”

Smith is bringing a woman’s perspective, and that of a Black woman, to the comic book industry.

“In comics, it’s a boys’ world for the most part, so I wanted to bring women out into the comic book world,” she said.

Marvel’s “Black Panther” being a massive success has helped Smith’s endeavor in the comic book world.

“‘Black Panther’ helped people recognize that there’s a space for us in this world,” she said.  “Because it’s been male-oriented and White-dominated.  Now that “Black Panther” has come out, it helped the process.  It helped me walk in and them (executives) not looking at me sideways.”

In the Marvel and DC Comics universes, there are some prominent Black female characters, such as Storm (Marvel), Vixen (DC Comics), and Bumblebee (DC Comics), but none of them have been leads.

“There are some in the mainstream, but as far as comics that were focused on Black women, that wasn’t happening,” Smith said.  “Rayven was the first one to pop, and there’s a whole world, the Shero universe, that I’m creating from her.”

The Shero universe will be centered around Rayven Choi, with spinoff comics about characters within the Rayven Choi storyline.  The success of the “Rayven Choi” series led Smith to create SheroCon in 2019.  The inaugural woman-led comic book convention was held at the Westfield Culver City mall (affectionately known as the Fox Hills Mall by locals), with a follow up convention in 2020.  The COVID-19 pandemic led to the cancelation of the 2021 convention, but Smith plans to continue in the future.

“People were really into having space for women,” Smith said.

A comic book convention that has a Black woman as the featured character is extremely important because it allows Black girls to dress up like characters who look like them.

The success of Smith’s comic books has led her on international tours.

“It’s been really cool to see people’s response,” she said.  “We went to Indonesia, and there really aren’t a lot of Black folks in there.  Or Americans.  It was a completely foreign territory for me to go to their comic con and see their reaction.  And they loved it.”

Smith’s characters could soon move into television, as she has submitted a script for a live-action television version of “Rayven Choi” to the Sundance Institute.  Smith moved to Los Angeles from Salisbury, North Carolina, to become a screenwriter.  She worked as a production assistant on “Everybody Hates Chris” and on “The Flavor of Love.”  She was in award-winning filmmakers Ron Howard and Brian Grazer’s Imagine Impact program, which was created to discover emerging writers.  Filmmaker J.J. Abrams asked to read Smith’s script for “The Legend of Cahokia.”

“It was a stamp of approval that he considered reading it,” Smith said.

Smith has made a pilot episode of “Rayven Choi,” which can be viewed on Youtube.  For more information about Smith’s comic books and about Shero Comics and SheroCon, visit www.sherocomics.com.