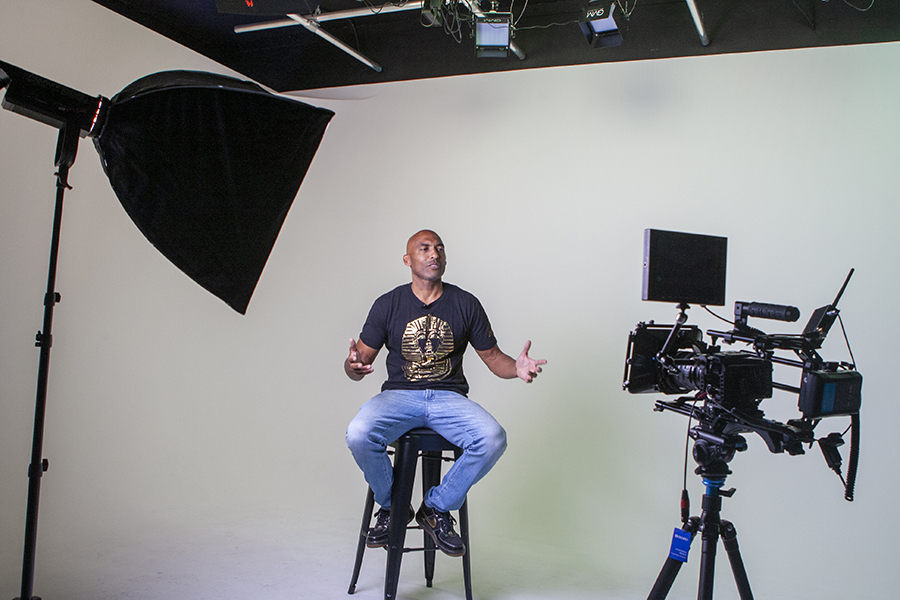 The Paul Robeson Studio on Crenshaw Blvd. has camera, sound, and lighting equipment for video and photography projects.

The Metaphor Club opened in 2018 as a writer’s lounge on Crenshaw Boulevard in Leimert Park, just north of Vernon Avenue.  The co-working space for writers, students, and professionals expanded the location so that they could host for live events, community meetings, and be a place where people could produce podcasts.  They’ve recently expanded their creative campus again with the opening the Paul Robeson Studio, which will give filmmakers and people with small and medium sized video and photography projects a high-quality place to create their work.

“Our goal is to be the creative epicenter of Los Angeles… of Black L.A.,” said Gerald Rawles, co-owner of the Metaphor Club.

The studio features a Cyclorama infinity wall, cameras, and sound and lighting equipment.

“We can do photography, shoot virtual shows, do news segments, inserts for movies, use it for green screens and do all types of special effects,” Rawles said.  “It’s really kind of limitless possibilities.”

A space like this is important because many Black people who work in the film industry are unable to create most of their work in Black communities of Los Angeles.

A space like this also exposes people to the film industry.

“Even though Hollywood is in our backyard so to speak, a lot of people, especially in our community, don’t have access or opportunities to break into that,” Rawles said.  “The same thing with the co-working space.  Co-working spaces similar to us, you have to go to Hollywood or to the Westside.  We wanted to bring all of that here.”

There will be educational workshops at this venue, and the Metaphor Club has several members who have film and video experience who will be working at the site.  There will be rental packages in which people can rent the space and bring in their own equipment, or they can rent the equipment on hand.

“We have a roster of people who are adept at camera work, lighting, and stuff like that,” Rawles said.  “So you don’t have to be an expert in film or video production.  Really we just want the talent to come.  The idea is kind of like bundle everything so it’s like hitting the easy button.  (People can) come in, sit down, start acting, singing, whatever.”

This new space at the Metaphor Club aligns with Rawles’ career as a film producer.  He started out as a music video producer 20 years ago, when he partnered with his Temple University classmate Benny Boom, who is now a film and music video director.  Rawles came to Los Angeles to be a filmmaker, and he co-produced “Next Day Air” in 2008.  He worked with Boom on “All Eyez on Me,” which was a biographical film on the late Tupac Shakur.  He is the executive producer of “Tazmanian Devil,” a film about a Nigerian immigrant who struggles to balance his desire to join a college fraternity and bonding with his religious father.  “Tazmanian Devil” can be viewed online.

The Metaphor Club is located at 4333 Crenshaw Boulevard.  Visit their website at www.themetaphorclub.com and follow them on social media.