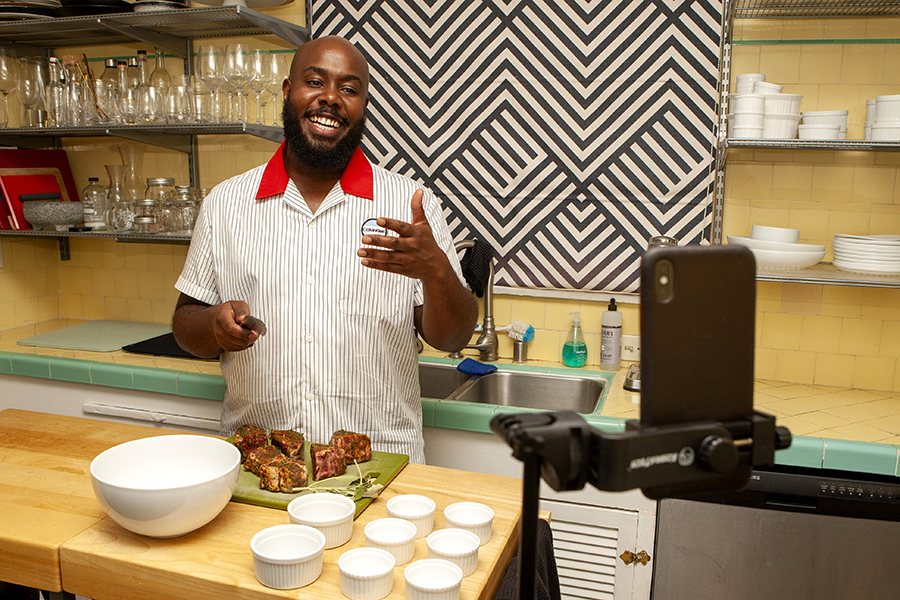 Christopher “Seth Brundle” McMullen does a “Live at 5” cooking show from his kitchen every Wednesday at 5 p.m. on Instagram Live. @sethbrundle Photo by Jason Lewis

McMullen is a media personality and lifestyle curator who has a cooking show on Aspire TV which is produced by Issa Rae Presents.

Christopher McMullen can make pretty much anything look fly, which is where he got his stage name.  His favorite science fiction movie is “The Fly,” so it is fitting that he goes by Seth Brundle, the lead character in the film.

After a short career in public relations and marketing, the Morehouse College grad changed gears to become a fashion stylist in the entertainment industry.  Six years later, he decided to follow his cooking passion, so he teamed up with Leslie Antonoff to create the series “Butter + Brown,” a cooking show produced by Issa Rae Presents and broadcast on Aspire TV.

McMullen’s creativity is innate, as he displayed artistic abilities at an early age growing up in Carson, California.

“I remember drawing, doodling, making figurines with Play-Doh,” he said.  “I just had a wild imagination playing in the backyard; creating entire worlds, universes, and people.”
During elementary school, McMullen knew that he wanted to work in the entertainment field when he grew up.

“I used to want to be Diddy (music mogul Sean Combs) before I finally figured out that I didn’t have any talent in music,” he said.  “But my teachers were always pushing me to pursue it.  When I was in elementary school I wanted to be an actor, so my teachers would give me lead parts in the school plays.  They would give me materials to study.”

McMullen credits his parents and teachers for pushing him to excel academically.  While attending King Drew Magnet High School of Medicine and Science in Willowbrook, California, which is between Watts and Compton, he was a big fish in a small pound.  It was easy for him to standout.  But that all changed when he got to Morehouse College in Atlanta, Georgia.

“When I got to Morehouse, I realized that I was giving up my small pond to be in the ocean,” he said.  “My talent had to start to speak for myself, and it made me realize that there are other things besides my talent that I needed to utilize to be able to highlight my talents.  My experience at Morehouse prepared me for everything that I’ve done since.”

Attending a Historically Black College and University (HBCU) taught McMullen how to build community, foster relationships, and effectively complete tasks. While in school he interned each summer in Mattel’s entertainment department.

After college and the brief stint in public relations and marketing, McMullen set his sights on becoming a fashion stylist.  He started off assisting Monique Scott, who has worked with singer Faith Evans, rapper Kendrick Lamar, and many other celebrities.  McMullen ventured out on his own after six months, and went on to work with actress/producer Issa Rae, and singers Teyana Taylor, Chris Brown, and Jhené Aiko.

In 2015, McMullen was developing a web series when he got call from Antonoff, who already had a series on Issa Rae Present’s YouTube channel.  The two discussed creating a cooking show, and soon after they filmed a 6-minute presentation pilot on a shoestring budget to serve as a proof of concept.  They had a pitch meeting with Rae where they showed the pilot, and to their surprise, it quickly turned into a production meeting.

“She loved it,” McMullen said.  “A minute in, she broke out her notebook and started furiously writing notes. We didn’t really know what was happening.  By the time the pilot ended, she said that she loved it and asked if we could change the lighting and a few other things, and turn it around in two weeks.  And we were still shocked that she liked it.”

From there, “Butter + Brown” was born, and after six 12-minute episodes aired on YouTube, Rae got a call from media personality Angela Burt-Murray from Aspire TV, the cable television network targeting African American viewers and launched by Magic Johnson in 2012.  Shortly after Burt-Murray’s call, “Butter + Brown” enjoyed its cable television premiere on the network.

“We had a pilot presentation season, and then we’ve done three seasons since then,” McMullen said.  “We also did a show called “Big Screen, Small Bites.” That was essentially a dinner and a movie style show where we did these cooking shows centered around movies that the network was syndicating at the time.  The recipe was always tied to the movie.  So for ‘How Stella Got Her Groove Back,’ we did jerk chicken wings.”

Since “Butter + Brown” has aired, McMullen has started working for BuzzFeed, developing content for its Coco Butter channel, which is geared toward Black audiences.  He’s developing a show called “Seasoned,” where he takes boxed foods such as macaroni and cheese or brownie mix, and makes a great tasting comfort food or meal out of it.

McMullen developed his cooking skills in his parents’ kitchen as a youth, and in his own kitchen as an adult.

“I learned from my mother and my grandmother growing up,” he said.  “After I graduated from college, I got really interested in the Food Network and the Cooking Channel.  I started learning, and it went beyond the recipes that I learned from my mother and my grandmother, and it evolved into me understanding cooking as an art and understanding techniques.  My skill set developed over time through trial and error.  Pouring over cookbooks, watching culinary programming, and honing my skills in my own kitchen.”

“Butter + Brown” has an organic Afrocentric vibe because of the two hosts.

“I think it’s something that’s just naturally injected into the show,” McMullen said.  “Both of us attended HBCUs.  She went to Howard (University), and she and I had already been friends for about 10 years.  So we already had great chemistry.  We figured out how to have that chemistry translate on screen.  So we’re basically just having fun.  After we’ve written the episodes, the rest is personality driven.  We have the basic framework of what the episode needs to be, and then we just throw the color in there.  Which is just ourselves joking around and talking mess.”

The COVID-19 pandemic has shut down production of McMullen’s various shows, so he started a “Live at 5” show on Instagram Live.  Every Wednesday at 5 p.m. PST, he does a cooking demo show from his kitchen.

“It started a couple weeks into the pandemic,” he said.  “I would do the live cooking demos just for therapy.  It’s just so much fun to be on that platform, cooking live, and to challenge myself to do it.  Because food doesn’t always react the way that you want it to, especially when you have to man a camera, talk through a recipe, and make sure that everything is managed in real time.  When we do it on TV, that’s one thing.  We have a whole culinary crew of 10+ people.  But the first time I did a live show, it was the closest I had felt to the outside world since the pandemic started,” he recalls fondly.

McMullen has some social media campaigns coming up with 100 Black Men and Black Enterprise Magazine.  He has also had virtual pitch meetings with BET, CNN, Netflix, and Hulu for other shows.