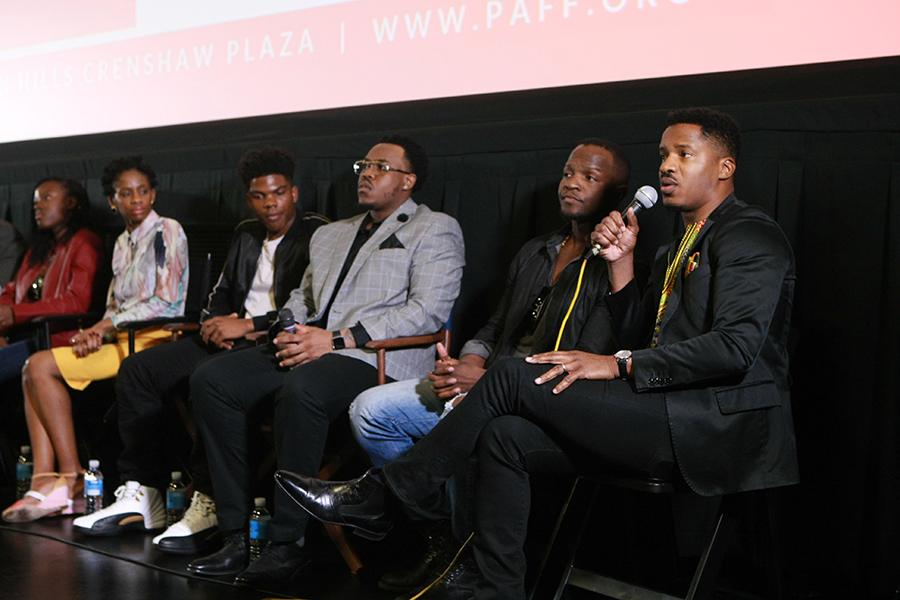 The festival returns to the Baldwin Hills Crenshaw Plaza February 11-23.

The Pan African Film Festival (PAFF) is set to take audiences around the world, without leaving home.  The largest Black film festival in the United States and the largest Black History Month cultural event in the nation is set to return February 11-23 at the Cinemark 15 Theatres, located at the Baldwin Hills Crenshaw Plaza in South Los Angeles.

The PAFF will feature 225 films, film industry workshops, networking opportunities, and an artfest.

Films at this festival come from 52 countries from around the world.  Eighty-six of the films are feature length, 128 are short films, and there will be over 50 documentaries.

While the African diaspora from around the world is represented, there will also be screenings from Los Angeles based filmmakers.

“Brown Paper Bag” is a feature narrative directed by Detdrich McClure, and is about a young Black actor who has come to Los Angeles in 1942 to make it in Hollywood.  The actor is blacklisted and thrown off a movie lot.  Now his only chance of getting his dream back is finding a missing White starlet who has been kidnapped. To find the missing starlet, Archie has to go through Black Hollywood where he uncovers secrets and lies.

“It’s Yours” is a feature documentary directed by Marguerite de Bourgoing.  By the dawn of the 21st century, hip-hop sales had reached an all-time high, but one thing has remained the same. The doors were still locked, and the music industry held the keys. Young artists began to self-market on the Internet, ultimately helping to collapse the music industry as we knew it. “It’s Yours” explores how it became possible to become a rap star through a Twitter account, YouTube site or Myspace page.

“Pigeon Kings” is a feature documentary directed by Milena Pastreich.  Not the typical image of South Central Los Angeles, “Pigeon Kings” takes us through the backyards, where men are devoted to tumbling pigeons. We watch as enthusiasts breed and train their birds for the Birmingham Roller Pigeon World Cup, where birds must fly together and somersault in unison, like a flock of synchronized swimmers in the sky.

“Pink Opaque” is a feature narrative directed by Derrick Perry.  A story of love, family, hardships, and life in Los Angeles. While struggling to finish his thesis documentary required to graduate, Travis Wolfe reconnects with his estranged uncle and navigates a budding romance against the wishes of his girlfriend's older brother.

“She Ball” is a feature narrative directed by Nick Cannon.  Rooted in discourse about race, gentrification, criminal justice and female empowerment, “She Ball” follows the love of the game through the struggles of Avery Watts, a single father who lost his NBA dreams to gang violence. Avery now struggles to keep his family's community center open amidst rising gentrification in the City of Inglewood. He joins forces with an unlikely ally, Shelby Vandergun, a White girl with serious basketball skills. Together they fight against local politicians, gangs and their own stereotypes to save the community and enlists the “baddest” women's streetball league in Inglewood to help save the embattled Inglewood Community Center.

The festival’s workshops are hosted by the PAFF Institute and will feature panel discussions by Black professionals within the film industry.  These workshops are designed for people who are looking to break in to the industry, enhance their film careers, or are just interested in learning more about the industry.

“These are people who have experience, and they are coming here to share their experiences,” said Asantewa Olatunji, PAFF director of programming.  “These are people with valuable information, and they’ll be telling us what their course was.  They’ll talk about some of the hurdles that they had to overcome in order to get where they are, as well as letting us know that it’s doable.  And they’re relatively young people, so they’re not talking about something that happened back in 1992.  These are people who have had their careers take off within the last couple of years.”

The PAFF has a partnership with YouTube and The Africa Narrative at USC Norman Lear Center where they held the I Am Africa Film Competition.  The PAFF also held The John Singleton Short Film Competition in partnership with Los Angeles City Councilmember Herb J. Wesson, Jr.  The citywide short film contest highlighted stories focused on the African American experience.

The artfest will be held daily on the second level of the Baldwin Hills Crenshaw Plaza.  Not only will there be original and unique pieces of art created by Black artists, venders also will sell jewelry, clothing, and books.

“One thing that I find with the art, it doesn’t only decorate my walls, it also gives me energy and uplift, because I’m seeing a refection of me,” Olatunji said.  “Of who I am culturally; of who I am physically.  And it just gives me an energy that I don’t think that I would have if I didn’t support the arts.”