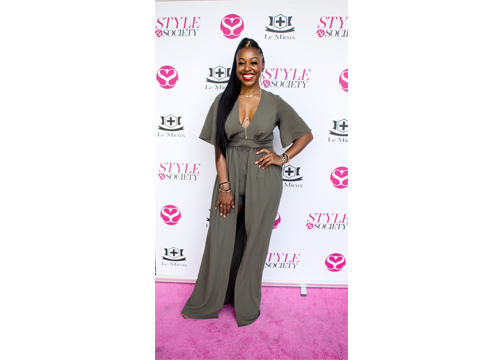 Claiborne is the founder of Style & Society Magazine, and she is a community relations manager at Los Angeles Metro.

Kinya Claiborne has an incredibly busy schedule.  As a communications expert, she is the founder and editor-in-chief of Style & Society Magazine; the executive producer and host of The StyleList on This is Onx; and she is a community relations manager at Los Angeles Metro.

Time management throughout long days and working with talented people has allowed Claiborne to balance these three jobs.

“My day starts really early, and it goes really late,” she said.  “Usually before I even make it to my day job (at Metro), I’ve already written three articles.  But it’s really more than just me.  I have an amazing team, and my team is global.  We cover content all over the globe.  I have team members in New York, New Orleans, Texas, West Africa, and here in Los Angeles.  That team is the backbone of the magazine.  Without them there would be no Style & Society Magazine, so it’s bigger than just me.”

“A lot of publications focus on one silo or one area,” Claiborne said.  “It may be entertainment, or fashion, or health and fitness.  At Style & Society, we cover all of that.  We’re multidimensional.  I like a lot of different things, so I really wanted to create something that encompasses all of that.”

Many online publications that focus on entertainment and lifestyle tend to cover celebrity gossip.  But Claiborne was not interested in going in that direction.

“Our readers are sophisticated,” she said.  “There’s no gossip.  There’s no salacious content.  Everything is very clean, very polished, and very news driven.”

The StyleList takes the content from the Style & Society Magazine, and puts it in a video format.  New episodes premier every Friday on This is ONX, which is a digital video network that puts the spotlight on the global black experience.

Recently Claiborne was a host at Los Angeles Fashion Week, and she has been invited to the StyleCon convention as an influencer.

While Claiborne’s work with Style & Society Magazine and The StyleList covers topics in pop culture, she is community driven, and the bulk of her day is spent in South Los Angeles working to link the community with the Metro Crenshaw/LAX Transit Project.

Claiborne was hired by McKissack & McKissack, which is the oldest African American-owned architecture and engineering firm, to be a consultant for Metro.  She works closely with the Community Leadership Council, which is a group of community leaders who advise Metro so that local residents’ needs and desires are met, and so that people who live in South Los Angeles can greatly benefit from the train passing through their neighborhoods.

The Crenshaw/LAX line will bring change to the greater Crenshaw area of South Los Angeles, and Claiborne is ensuring that the community is well informed about the progress of the project, and that their voices are being heard.

“It’s also important to maintain the historic value of the community,” she said.  “Like in Leimert Park, there are businesses that have been there for a long time.  This project will bring in the new, but it will also maintain the old.”