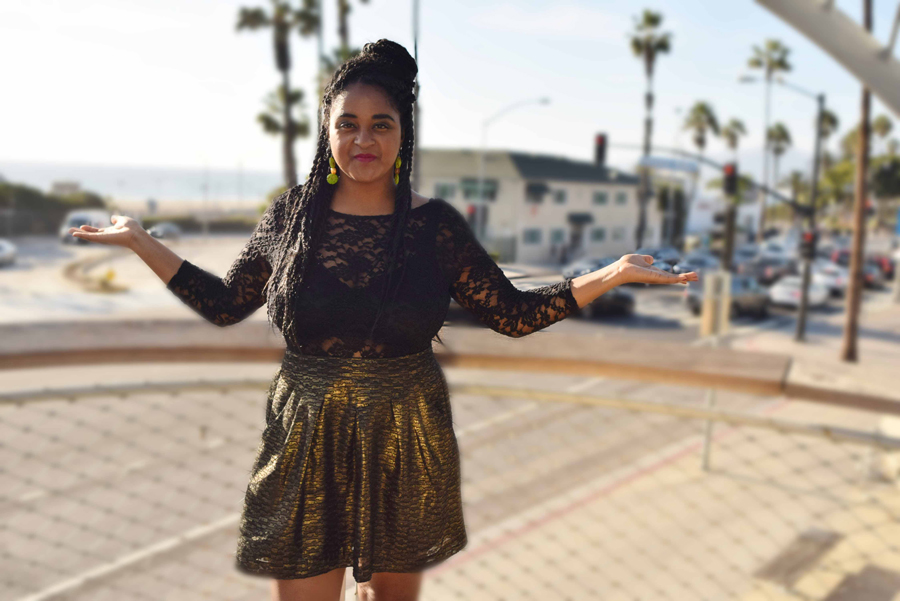 Marguerite Alexis community involvement is reflected in her music. She works as a mental health advocate at NAMI Urban Los Angeles in Leimert Park. Photo by Trai Icart

“I Am” is a reflection of Alexis’ upbringing and community involvement in South Los Angeles.

Recording artist Marguerite Alexis has released her debut EP titled “I Am,” which contains six neo-soul songs that reflect love, faith, identity, community, and social justice.  The songs are heavily influenced by her upbringing in South Los Angeles.

Alexis attended LACES for middle and high school, and then she went on to obtain a degree from Williams College in Massachusetts.  While in high school and college, she was heavily involved with the black student union, she was an activist, and she sang in gospel choirs.  She was the co-director of the gospel choir at Williams College.

Alexis has been strongly influenced by neo-soul greats, such as Erykah Badu, D’Angelo, Jill Scott, Musiq Soulchild, and Solange.

“I Am” features songs that discuss the social and political issues of today.

“I wanted to create songs about black identity and black struggle,” Alexis said.  “It was really important to me to create songs about what we have gone through.  About this idea of hope.  I speak about black lives, and talking about all marginalized lives.  Whether you’re in the LGBTQ community, whether you have a disability, whatever your religion or nationality is.  Whatever you are, if you’re in a marginalized community, that we can all one day be free.  I wanted to bring that idea of hope, but at the same time sharing what the struggles have been.”

Alexis also personalizes some of the songs on “I Am.”

“It’s about identity, particularly me as a woman of faith and a woman of color,” she said.  “It’s about community, which is about upliftment and support.”

Alexis’ role in South Los Angeles communities is reflected in her music.  Her passion for mental health and wellness has led her to work for the National Alliance of Mental Illness Organization.  The Leimert Park branch is known as NAMI Urban Los Angeles.  She works as a mental health advocate with middle school through college students.  She attends various community meetings to promote the services of the organization.

Alexis is an independent artist, and she released “I Am” under her own record label, Freedom and Soul Records.  She is continuing her education at West Los Angeles College, where she is taking music production classes.

“There’s a lot of benefits in being a producer,” she said.  “You have more creative autonomy.  If I’m creating my own production, I’m not only creating the lyrics and the melody, I’m also creating the beat.  And nobody wants to listen to a song with a bad beat.  Producers are sort of the champions that don’t get enough credit.  If you have a good producer, your song is good.”

In the future, Alexis plans to pursue a Ph. D. in clinical psychology.

“I envision myself as an artist and also as a mental health advocate, a therapist, and a life coach,” she said.