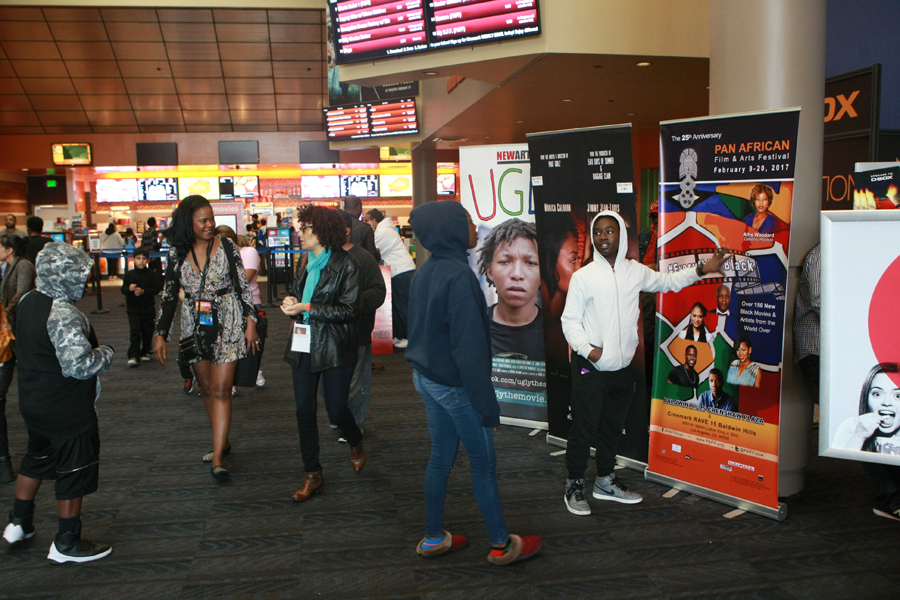 The films are being shown at the Cinemark Baldwin Hills Plaza 15. Photo by Jason Lewis

The festival features films from around the world, an art fest, and film networking events.

The Pan African Film Festival (PAFF) is celebrating 25 years by showcasing over 200 films made by black filmmakers, and they are hosting workshops that inform the public about ways to break into the film industry.

The PAFF provides a spotlight and platform for Pan African images, according to Asantewa Olatunju, PAFF director of programming.  Feature films come from the United States, Africa, South America, the Caribbean, and other places in the world where there are black communities.

“If you take the entire global existence of black folks, there are lot of black films that are being made throughout the world,” Olatunju said.  “The Nigerian film industry I believe is either No. 1 or No. 2 in terms of the production of film.  So you really do have a lot of black films.  It’s just unfortunate that in this country we don’t necessarily see all of those films.  That’s one of the real purposes and one of the highlights of the Pan African Film Festival; is that you get to see all of these films from all over the world.”

Olatunju said that many people say that they cannot find a lot of black films, which is why the PAFF is so impactful.  The festival features films from various genres, including drama, romance, science fiction, action, family, and children films.

“There’s such a variety and there is something here for everyone,” Olatunju said.

The PAFF also features amazing documentaries.  “Do Not Resist” documents the rapid militarization of police forces throughout the United States.  Another documentary hits closer to home, as “41st and Central” tells the untold story of the Los Angeles Black Panthers.

Watching black films is only one part of this festival.  This is a great networking event for anybody who is in the film industry, or people who are trying to break in.  There are several workshops that feature panel discussions on various topics within the film industry.

“This is Los Angeles, the film capital of the world,” Olatunju said.  “The reality is that there are so many film jobs here.  If people are interested in getting into the film business, or even servicing the film business in some way, we have several workshops.”

“This is to put it in their heads that if you’re going to be living in Los Angeles, where the movie business is the largest business in terms of dollar amount, they need to plug into the industry,” Olatunju said.  “Sometimes it’s not the creative part, but just servicing the industry.”

Most film jobs do not have much to do with acting, directing, writing, or producing.  There are electricians, carpenters, painters, dress makers, make up artist, cooks, drivers etc.

The PAFF also has an art festival inside the mall, and Olatunju has collected pieces during the film festival.