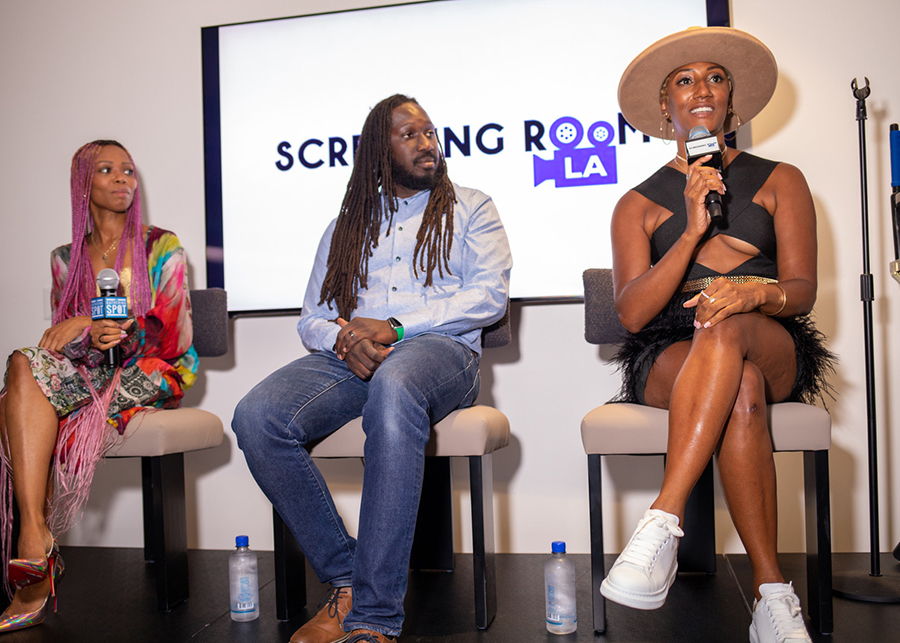 Black filmmakers meet monthly at The Gathering Spot in West Adams to showcase their work and for networking opportunities.

Actress and producer Khalimah Gaston has created an event series to support the Los Angeles Black independent film community.  Producers, directors, writers, actors, agents, investors, and executives meet monthly at the Gathering Spot in West Adams to showcase their work and to build their networks.

Participants in these events submit short-form content, which can be short films, episodes of a series, film clips, trailers, director’s reels, poetry pieces, and music videos.  After the content is viewed, Gaston interviews the creator of the content.

“You can come here, hone your skills, meet the people that you need to meet so that you can keep going,” Gaston said.

Gaston, who is from Queens, New York, attended the New York Conservatory for Dramatic Arts where she studied acting.  She performed off Broadway before moving to Atlanta.  While there, she created the Screening Room Atlanta in 2016.

“Our very first event in Atlanta, we only had 10 people,” she said.  “And I did it every single week for two-and-a-half years before I moved here (Los Angeles).  When I first did it, it was with just a few friends and people that I had met that year.  And then the next thing you know it became 20 people, 50 people, 100 people.  We regularly had 100 guests in attendance.”

Gaston continued the series when she moved to Los Angeles, and these meetings are important because many Black people in Los Angeles’ film industry work independently of each other.

“It allowed a space for when we needed to create our content, we knew exactly where to go to find people to do that, and now we could really connect and help each other out,” Gaston said.

The networking opportunities have helped Gaston progress through her career.  Recently she had a job interview to become the creative director at a studio.  The interviewer had submitted work to the Screening Room Atlanta, so he was well aware of Gaston’s work.

“He knows what I do, what I’m capable of, and the people that I’ve helped,” she said.

The Screening Room LA is held at The Gathering Spot, a Black-owned coworking and event space, in West Adams, which is a predominantly Black and Latino community.  Gaston intentionally chose this location to be closer to the people who she wanted to network with.

“Everything is always in Hollywood, North Hollywood, WeHo,” she said.  “I knew that as a Black woman who’s intentional about building my community, I always go out of my way to support Black people; especially with content.  This is for us, by us.  White people are more than welcome to show up, but this is not for you.  We’re always going to be inclusive of anyone who loves art.  So you can pull up, but my intention and my energy is always going to go into people who look like me.”

The Screening Room LA is held on the last Wednesday of the month.  Members of The Gathering Spot can attend for free.  For nonmembers the cost is $20.  For more information, visit thescreeningroomatl.com and follow them on social media.