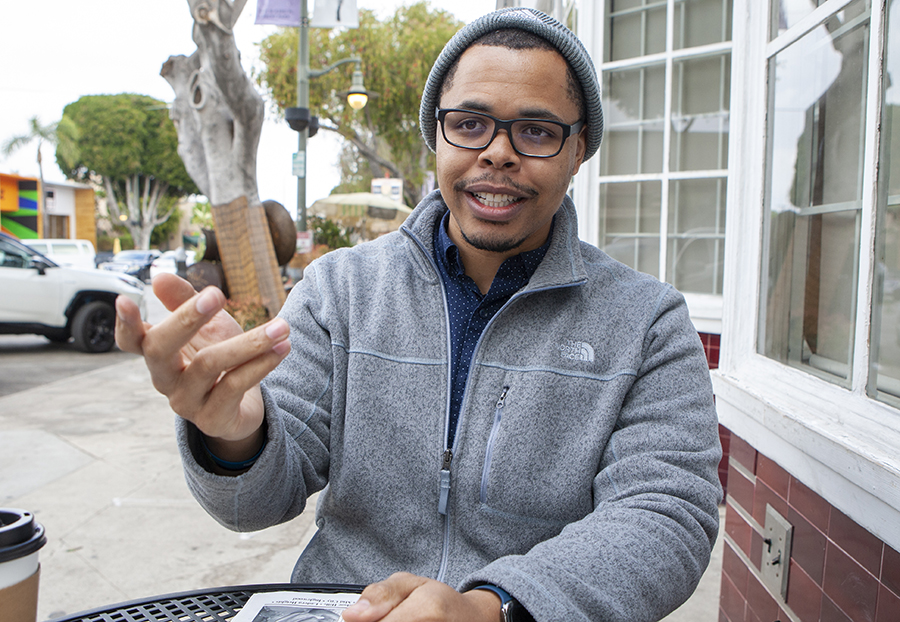 Writer and researcher Eric Craig started off his YouTube channel with a simple question. Is it “South Central Los Angeles” or “South Los Angeles?” Photo by Jason Lewis

Eric Craig has been putting his talents as a writer and a researcher to good use as he uncovers little known facts and stories that have shaped Black communities in South Los Angeles, and he packages those stories into YouTube videos which he narrates for his channel The South LA Recap.

In these videos, Craig discusses the history behind these places and events, how these places evolved over the decades, how race and racism played a role shaping these areas, and what these places are today as current residents know them.

“I had this curiosity, because this is where I grew up, like, what are our neighborhoods?” he said.  “What are our special things that make us a cool part of the city?”

Craig spent portions of his childhood near Locke High School and also near Hoover Avenue and Gage Avenue.  He attended Xavier University of Louisiana, where he studied political science.  While in college, he started his career in journalism and he was the editor-in-chief of his school newspaper.

Today Craig is a writer and content creator for a local charter school, and he has worked for Curbed, which is an online publication that is dedicated to neighborhood development.  He uses his education and career skills to produce the content for The South LA Recap.

Craig has come to find out that South Los Angeles has unique issues that other parts of the city do not have.

“It’s funny because my wife grew up in Pasadena and I’m learning that a lot of things that I thought were normal weren’t actually normal,” he said.

“I Googled it, and I’d talk to other people,” he said.  “Many people said, ‘It’s South Central; South L.A. is a gentry word.’  Other people were like, ‘South L.A. is what it used to be called.’  When my mom grew up they called it South West Los Angeles, which is true up until about the 1980s when South Central became the word of choice.  There’s all of these things but there’s no concrete answers.”

As Craig dove deeper into the history of this area, the negative connotations driven by various media sources were very evident, including on social media.  YouTube’s algorithm skewed toward crime when people searched for “South Los Angeles” or “South Central Los Angeles.”

“When people type in South L.A., they want to see burglaries, car chases, really bad fires, and someone getting killed,” he said.  “Those will be the top 10 videos that you’ll see.  And then you might see that one on the Black people making tacos on 108th and Avalon.  There’s little positive press.”

In several of Craig’s videos, he highlighted places that were built for a mostly White South Los Angeles community, and he discussed how and when the communities changed to mostly Black and Latino.  In one video about Baldwin Hills, he touched on the racial transition, and how city services ceased in those areas when White people left and Black people moved in.

“I’ve read from newspaper clippings that city services, like street cleaning, weren’t done as frequently,” he said.  “In the ally video that I did, the gated allies all across South L.A. was just a ploy so that the city could just wipe their hands clean of serving mainly South Central residents from illegal dumping pickup requests.”

Losing services was also highlighted in a video about Washington Prep High School, which was the home to an aviation program when it opened in 1928 with a White student body.  But as the community and student population became Black and Latino, many of the innovated academic programs vanished.

Craig typically spends 20-30 hours creating each episode.  After hours of research, he writes a script, films himself, and he spends several hours editing the video, which includes embedding video clips and images.

“I had one person who wanted to know about Wrigley Field,” he said.  “I looked at the Wikipedia page and I thought that it was interesting.  I then go to Newspapers.com, which I pay for the subscription.  And from there I do general search terms.  I can spend anywhere from two to 20 hours just looking through different newspapers.  If I’m looking at something in Leimert Park, I’m doing a search on the Southwest Wave.  If I’m doing something in the south or east part of South L.A., I’m looking at the California Eagle.  Before 1961 they were covering most of that.  If I’m looking for how things are shifting, it’s funny that the L.A. Times always comes in when things become super Black.  They never talked about it when the Eagle or the Wave were talking about upcoming Black communities.  When the L.A. Times comes, that’s when you know it’s South Central, it’s trash, and nothing is coming out of it.  That’s just how they report on it.”

Craig has created over 60 videos about South Los Angeles, which can all be viewed on his YouTube channel www.youtube.com/c/TheSouthLARecap.  The South L.A. Recap can also be followed on social media.