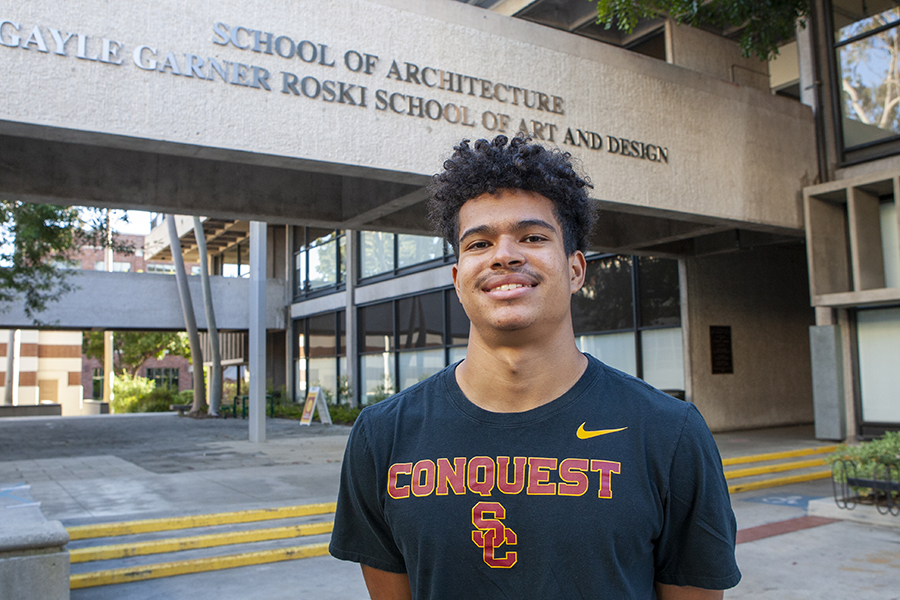 Ian Alonzo has been a fan of USC and fascinated with architecture since he was a young child. Photo by Jason Lewis

The Inglewood native plans to design buildings in his community after he graduates from USC.

Ian Alonzo has been a fan of USC since he was a small child, and now he is heading there after he graduates from Rolling Hills Prep.

“I chose USC because ever since I was little, I always had an admiration for it,” he said.  “When I was young, my family and I would watch football games.  At first I was a fan of the sports teams, and as I got older, I learned that the college is much more than about football and sports.  When I started researching colleges, I learned that they’re not only one of the best programs at sports, but just about anything that you can think of, they’re at the top.  When you think of the best colleges, they’re always in the conversation.”

Alonzo, who is from Inglewood, plans to study architecture when he gets to college.  He became interested in the field from playing the video game Minecraft, which allows players to build structures and communities on various types of terrains.

“Me and my friends would play that game for hours,” he said.  “I was always fascinated with building stuff.”

In middle school Alonzo did an art project where he featured skyscrapers in Miami.  When he travels to other cities in the country, he also pays attention to the architecture of the buildings.  While in high school, he took a course where he learned about architectural styles from the past.

“I like the more modern styles, but I took an art history class last year and I was fascinated by the Neo-classical styles,” he said.  “I was really able to learn about the thought process of the creators.”

While many locals use their education as a way to leave their communities, Alonzo plans to use his talents to help people in Inglewood.

“Once I finish college, I want to go straight back to my community to help minority communities thrive, since those communities don’t have as many opportunities as other communities,” he said.  “I just know growing up in my community, I understand the struggle that people go through.”

Alonzo has toured USC’s campus, and he has seen how the USC Village, which opened in 2017, was developed to give students convenient access to a grocery store, dining, and retail shopping.  USC students have more access to fresh and healthy foods than people who live in local Black communities.

“Whenever we would go grocery shopping, we would have to go 15-20 minutes to another area just to find nice stores,” Alonzo said.  “Where as the grocery stores in our area, they aren’t as nice.  Creating stores that are more modernized creates more job opportunities for people that are unemployed.”

Alonzo also wants to address the homelessness problem in his area.

“There’s a pretty big homeless population, and I want to create affording housing for those people,” he said.

Many local public schools have buildings that are several decades old.  Alonzo wants to give local students a more modernized place to obtain their education.

“Many schools in that area are pretty old and outdated, so one of my other goals in redeveloping schools,” he said.

Alonzo is a very community driven person, and he has grown to become spiritual at St. Anselm Catholic Church in South Los Angeles.

“My family is very religious, especially my grandmother,” he said.  “She goes every day.  She taught my mom and my mom’s brothers to be the same way, and it came down on me as well.”

Alonzo participated in a confirmation program at church.

“It helped me realize that God plays a pivotal role in the way that we function,” he said.  “He does everything for a reason.  It helped me to realize that just waking up every morning is a true blessing.  It really helped me mature.”

Alonzo performs community service through Rolling Hills Prep., and he has an older sister who graduated from Columbia University.  She is studying to become a lawyer.