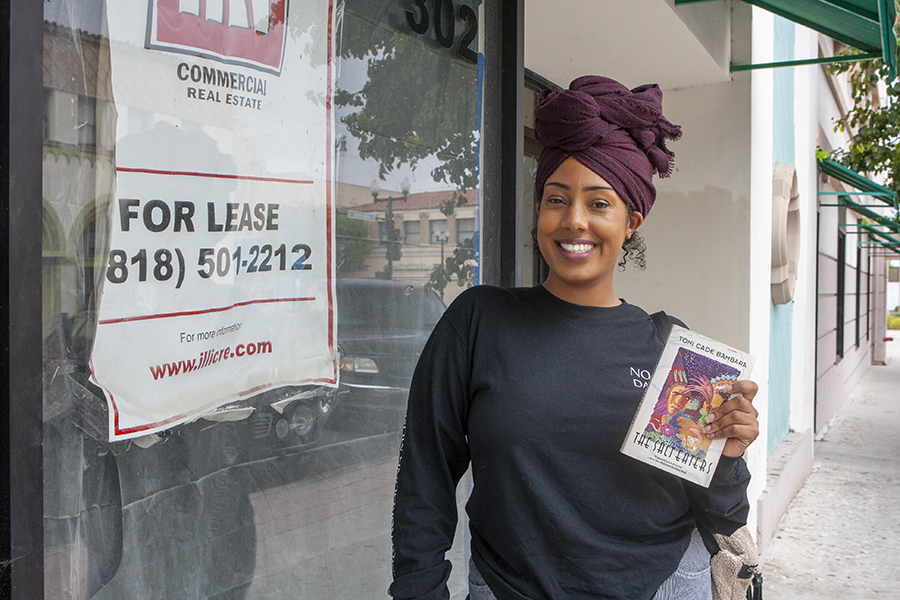 Inglewood native Asha Grant has raised over $80,000 through GoFundMe to open a bookstore on Queen Street, just off of Market Street.

Books are no stranger to Asha Grant, who has always had a love for literature.  A love so strong that she will be opening her very own bookstore, The Salt Eaters, in downtown Inglewood.  It is a much needed bookstore focusing on books “by and about Black women and girls, femmes, and non-binary folk.”

Growing up in Inglewood Grant found her safe haven in books.  She has been a reader as long as she can remember.

“I've always been interested in books even when I was a kid,” she said.  “I remember going to Eso Won Books in Leimert Park and local libraries.  When I was in middle school I spent a lot of time in the library partially because it was a safe house for me because I needed a place to be before school and a place to finish my homework.”

To this day bookstores and libraries are still her favorite places to go.

An avid reader, some of Grant’s childhood favorites include Deborah Gregory’s “The Cheetah Girl” series, J. K. Rowling’s “Harry Potter” series, “Island of the Blue Dolphins,” Debbie Allen’s “Dancing in the Wing,” and a plethora of other titles.  She noticed that she often gravitated to books relating to people of color even though it was challenging to find childhood books for Black children.  Now some of her treasured titles are Yaa Gyasi’s “Homegoing,” Brit Bennett’s “The Mothers,” and Akwaeke Emezi’s “The Death of Vivek Oji.”  Grant explained that she loves anything by Toni Morrison, and the list of titles and authors that she loves could go on forever.

Attending Spelman College, an all-women’s Historical Black College and University (HBCU) in Atlanta, Georgia, had an impact on Grant and her future endeavors.

“Going to an HBCU was one of the best decisions I have ever made as a Black person,” She said.

Grant was motivated by her classmates, and inspired by the community , the speakers, and her professors.

“To be able to be in a school where my gender and my race were not the first thing people thought about when they saw me helped me dig deeper into my own passion without that extra burden was a true gift because you don't get to exist that way often.”

The HBCU experience helped Grant gain personal and professional confidence.  It even inspired the name of her bookstore, The Salt Eaters, which is the title of a book written by Toni Cade Bambara, a former professor at Spelman College.

In January of 2019, Grant brought The Free Black Women’s Library to Los Angeles.  It is an initiative started in New York to celebrate Black Women in literature.

“It is a Black feminist pop up book swap literary series,” she said.  “It was started in New York by Ola Ronke Akinmowo.  She brought 100 books to her Brooklyn stoop and invited other people to come and bring other books written by Black Women to swap.”

Grant said that starting the initiative in Los Angeles gave her the “confidence that people would be invested in having an actual physical space.”  People often asked if she would lay down roots, and it became a dream of hers but she knew that there was a deep business side to it.

Grant knew that the community would respond positively to the bookstore, but she just needed to take the leap. She started a GofundMe in July after totaling the expenses including the first year's rent which was $65,000.  She had a goal to raise the money within two months, but the money was raised in a week.  The love and support from the community allowed them to surpass their goal and put them currently over $80,000.

The GofundMe states, “The Salt Eaters Bookshop aims to create a Black feminist literary hub and resting ground for dreamers, seekers of knowledge, creatives, writers, community archivists, artists, change agents, and those invested in a liberation practice that holds Black women, girls, femmes, and non-binary folks at the center.”

Grant is ecstatic to open not only a book store but a safe space for the community.  She states she wants to have a “ teen book club so they can engage with other teens about books they are interested in.” She also hopes to have a children’s book club, Insecure nights where the community can watch the television show together and hold discussion after, book swaps, and even hold tables for students and freelancers to have a quiet place to study.

It was extremely important for Grant to open her book store in a Black neighborhood, because not only are they her target and focus but she also wanted to give back to the people who have helped her come so far.  It will be a safe space for many.

The Salt Eaters is hopeful to open at the beginning of 2021 on Queen Street in downtown Inglewood.  For more information, visit www.thesalteatersbooks.com and follow the bookstore on Instagram.