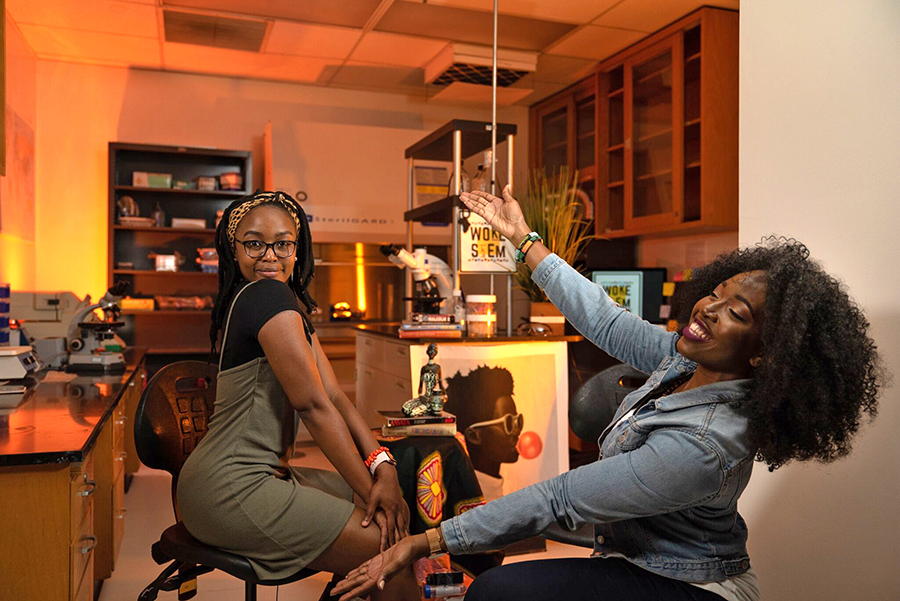 Shawntel Okonkwo (right), a UCLA PhD candidate who is studying molecular biology, interviews Nyasha Maforo, who is also a PhD candidate at UCLA. Maforo studies Physics and Biology in Medicine.

The video series taps into pop culture in a fun and witty manner to make STEM topics exciting.

According to the U.S. Census, about six percent of STEM (science, technology, engineering, mathematics) workers are African American.  Performing a Google image search of the term ‘scientist’ won’t yield too many images of Black people.  This is reflected in many Black communities, which always seem to trail behind other communities when it comes to technology.

UCLA PhD candidate Shawntel Okonkwo has taken up the cause to inspire young Black people to have more interest in STEM fields, and she’s using social media to reach out to the youth.

Okonkwo, who majored in biology at San Francisco State University before coming to UCLA to study molecular biology with an emphasis on gene regulation, created WokeSTEM, which is an online video series where she interviews other young Black scientists and engineers, and they discuss various STEM topics.  She incorporates pop culture themes through GIFs and memes that younger Black people can relate to.  While explaining complex science topics and themes, such as the muscle cells in the heart, a soundbite of Beyonce performing a popular song may pop up, or a funny picture of Kanye West in a tub of doughnuts will flash across the screen.  WokeSTEM videos also feature popular songs from Black music.

WokeSTEM videos are created in a way that can relate to young Black people, and because these videos can be watched on YouTube, they are free to watch.  Utilizing social media also helps WokeSTEM discuss social justice issues.

“We create really fun and cultural relevant videos that are accessible to people in our communities,” Okonkwo said.  “We're creating a think tank for understanding the disparities that underline the current state of affairs for Black people in STEM.  Instead of talking about why aren't there that many Black people working at Microsoft or Intel, where people can easily cite that Black people are not applying or they're not prepared enough, I feel that we need to dig a little deeper and understand the impact of zip codes on the quality of science education in schools.  Instead of having these conversations between scientists,  let's have these conversations between someone that studies zip codes, like political scientists, people who study the economy, and urban planners.

“Another aspect of science is engagement, and if you can't engage your audience than what are you really doing?  I created it so that everybody could access and appreciate it.”

Okonkwo took it upon herself to create the series to tackle issues that affect Black people, but aren’t really being addressed by Black people.

It’s extremely important for Black people to become more involved with STEM programs and in STEM careers because technology touches nearly every aspect of our lives.

“If we don't have a broad perspective of who gets impacted and who gets to make decisions about the type of science, technology, engineering, and math that is going to be implemented in these spaces, then you're going to see a lot of bias away from our communities being able to progress when the rest of society is benefiting from these newer technologies,” Okonkwo said.  “It's really important for us to be in this space so that we're able to make sure that we have an equitable society.  You think about things that are happening in Flint, Michigan.  You think about things that are happening with the Dakota pipeline.  Things of that sort definitely impact communities of color and communities that have been hit with social economic disparities.”