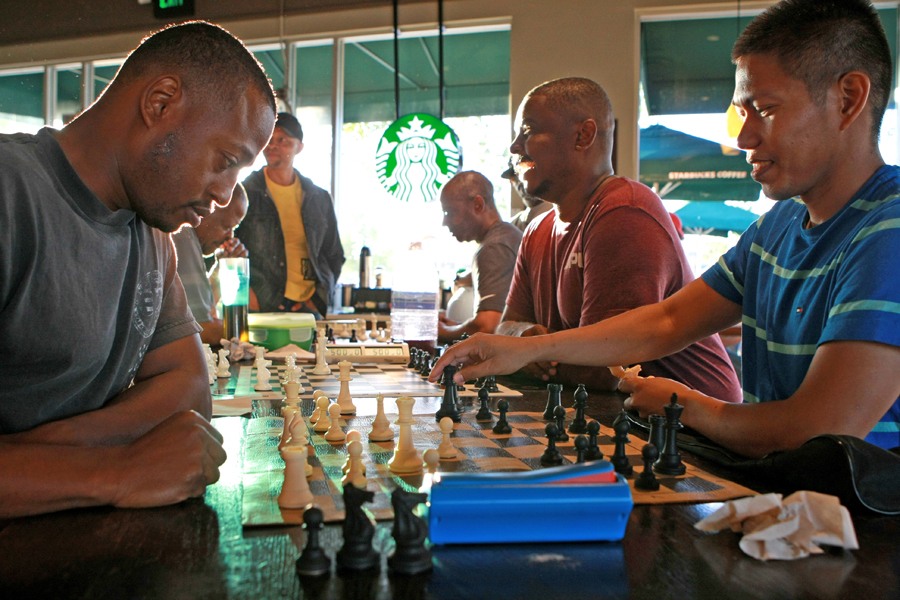 Adults at the Ladera Center Starbucks and children in after-school programs take advantage of the mental aspects of the game.

The intelligence level at the Starbucks in the Ladera Center is most likely pretty high.  If an IQ test were given on the people who frequent this particular coffeehouse, it would not be surprising to see a number of high scores.  Studies have shown that there may be a correlation between chess and higher levels of intelligence.

Chess players match wits at this Starbucks on a daily basis.  There is a table in the center of the coffeehouse where multiple games are played simultaneously, and there are games played outside on the patio of the Ladera Center.

The chess scene in South Los Angeles used to be at 5th Street Dick’s coffeehouse in Leimert Park, according to Damen Fletcher.  It then moved to Ladera Heights after 5th Street Dick’s closed.  After a few of the players started playing at Starbucks, many other players were attracted to the new spot, and the coffeehouse chain became known as the “chess Starbucks.”

“These guys show up around two or three o’clock in the afternoon and they stay until closing time,” he said.  “I remember a time where even after Starbucks closes, the players would be here until midnight playing outside.”

The players, mostly African American, have changed the culture of this Starbucks location.  Jazz music plays in the background.  Men hang out on the patio smoking cigars.  And there are debates about politics, sports, entertainment, and pop culture.

“It’s barbershop culture,” Fletcher said.  “You’re going to hear about the latest news.  People express their opinions.  Sometimes they agree, sometimes they disagree, which is a good thing… to have these conversations and express these ideas, even if they’re opposing ideas.”

While there are many friendly debates, the people are drawn to this Starbucks to play chess.

“The players here are very competitive,” Fletcher said.  “They talk a lot of trash here, but it’s all love at the end of the day.  They’re going to shake your hand or give you a hug.  They just like the competitive spirt.”

Fletcher said that there are players of all skill levels, from beginners to expert level.  He also said that the group of players are very inviting to new players, especially beginners.

“Anybody can play,” he said.  “We see new chess players come in here all the time.  Most of these guys, I remember when they first started coming.  They’re sharks now, but they weren’t always this good.  Every master was once a beginner.”

Speed chess is the game of choice with these players, which makes players have to think quickly.

“You don’t have all day to think,” Fletcher said.  “There’s a rush of adrenaline when you play that way.  And you get more games in.  If you come for an hour, you can get in about five or six games.”

Many of the players are men, but women are highly competitive within this group, according to Fletcher.

Chess is not only a game for adults.  Fletcher has made it his life’s work to introduce it to children.  He started a non-profit education program called Train of Thought.  The program uses chess instruction as a means to develop positive values and provide youth with a positive, growth-enhancing, and academically enriching experience.

Fletcher believes that chess greatly helped him academically and socially when he was growing up in Compton.  He was introduced to the game by his best friend when he was 13 years old.

“We spent every single day in the library playing chess,” he said.  “Every day, all four years in high school.”

Fletcher believes that the game not only helped him in the classroom, but it also kept him out of trouble away from school.

“The game inserted inside of me certain thought processes and thinking skills that became tools for me in life,” he said.  “Not only academically, but in my neighborhood.  When you’re faced with peer pressure, you’re able to look at options and see more options.  In chess you have all of these different moves that you can make.  It’s your job as a player to pick the best move.  That built inside of me the skill to be able to identify all of my options, analyze them, and then choose the option that is most suitable for me.

“With a lot of my friends, the choices that they made didn’t yield the same results.  I was kind of the rose that grew out of the concrete.”

Fletcher went on to become valedictorian at Bishop Mora Salesian High School, an all-boys private school in East Los Angeles.  His best friend who played chess with him everyday was the school’s salutatorian.

Fletcher went on to attend Morehouse College.  After graduating, he found his calling.

“I started reflecting on what it was about my own personal experiences that made me have such a different result than my peers that I grew up with,” he said.  “A lot of them are still selling drugs or are in gangs.  Some of them are incarcerated, and some of them are not even here.  I know that they wanted better.  But not seeing all of the options, not making the right choices, and not really analyzing all of the options properly, caused them to fall victim to so many of the traps in the world.  I was like, ‘why did I have such a different experience?’  And it was no doubt that it was chess.  It was all of that critical thinking.  I was practicing on the chess board all of the skills that I needed in order to make those proper decisions.”

When Fletcher started Train of Thought, his first students were from foster-care programs.

“I was met with all of the resistance that you could imagine from these kids,” he said.  “A game like chess is thought of as boring, or a game for old men.

“I had to figure out ways to introduce advanced concepts to kids who are not performing well academically.  I was very passionate about finding ways to help them through chess.  I wanted them to see all of the possibilities in life that exist through chess.  I could show them that they didn’t have to go a certain route.  They could back up and come back stronger.  They could go left or right.”

It did not take long for the children to pick up the game and become excited about playing it.  The children’s academics and behavior both improved while learning how to play the game.

“The counselors became aware that the game was helping the children become better decision makers in their lives,” Fletcher said.  “That was something that they had been trying to get them to do through more traditional means.  But they had little to no success.”

From there, Fletcher took the program to an elementary school in Compton.  After having success as an after school program, 12 Compton schools wanted to incorporate Train of Thought into their curriculum.  Inglewood Unified School District contacted him, and within eight years, the program was at 40 schools.  Since 2007, the program has been at  75 Southern California schools, four Louisiana schools, four Florida schools, and two Ohio schools.

Fletcher said that it’s pretty simple for children to pick up the game.

“I started teaching my kids at one years old,” he said.  “Typically when children can start to talk, and they start repeating things that you say, they can start learning the names of the pieces.”

Both of Fletcher’s children could set up the chess board before the age of two, and his four-year-old son can play a competitive game against people much older than him.

Chess is an inexpensive activity that Fletcher says “a kid can get a lifetime of knowledge and wisdom from.”
For more information about Train of Thought, visit www.chesstrain.org, call (323) 533-6891, or email This email address is being protected from spambots. You need JavaScript enabled to view it..  Also find Train of Thought on Facebook and Youtube.

The Ladera Center Starbucks is located at 5301 Centinela Ave.