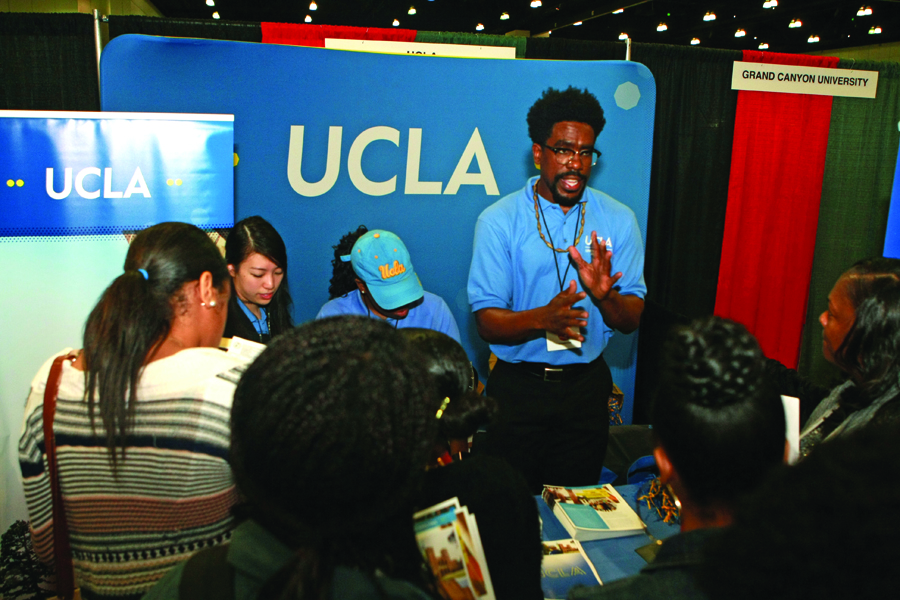 After only 96 black students were admitted to the college in 2006, the numbers have been on the rise.

A little more than a decade ago, UCLA’s black student population hit an all-time low, as only 96 black students were a part of the 2006 freshman class, which had nearly 4,000 students.  The dwindling numbers of black enrollees had been an issue throughout the 1990s.  In 1996, Proposition 209, which was the nation’s first ban on affirmative action, brought a crashing end to the relatively high number of students of color gaining admission into UC schools, particularly UCLA.

When the low levels of black enrollees hit a crisis level, UCLA’s Black Alumni Association (UBAA) stepped in to ensure that there were more qualified black students, and that those students had the finances to choose UCLA over other universities.

There was a wave of black enrollees from the late 1970s through the early 1990s, but competition from other universities diminished the amount of black students who selected UCLA.

“The competition for high-achieving African American students grew because all of the ‘elite’ schools were looking to enroll the same students nationwide,” said Robert Grace, Vice Chair of the UBAA.  “Stanford, Harvard, Yale, Berkeley, UCLA were all looking for the same profile of students in terms of SAT scores and GPA.  Then you factor in the competition from historically black colleges.  All of that combined to lesson the numbers prior to 209.

“When 209 hit, we weren’t able to get in any students based on ethnicity.”

In 2006, when UCLA admitted less than 100 black students, Dr. Winston Doby was asked to identify the problem and to find a solution for it.  Doby graduated from Fremont High School and earned three degrees from UCLA.  He began his UCLA administrative career in the mid 1970s and he developed university outreach and retention programs for underrepresented students of color. Winston went on to become the UCLA Vice Chancellor in charge of admissions and was directly responsible for the wave of black student admissions to UCLA in the late 197Os through the early 1990s.

When Doby took on the task to increase black enrollment in 2006, he saw that many of the qualified students were choosing other schools over UCLA.  In 2006, about 250 black students were accepted to the university, but only 96 chose the school.  The bulk of those students chose to go to other universities around the nation in part due to finances.

“They were getting admitted, but then we were losing them because we did not have enough funding,” said Christine Simmons, President of the Board of the UCLA Alumni Assocation.  “I think more and more people are starting to realize and understand that the public funding for UCLA and other UCs is very minuscule.”

In 2006, the UBAA Legacy Scholarship Fund was created.  The fund is designed to attract top tier African American students to UCLA by offering merit-based $10,000 scholarships to qualifying freshmen.  That scholarship is matched by UCLA on a yearly basis for the next three years, making the total value of the scholarship $40,000.

This scholarship, which was renamed the UBAA Winston C. Doby Legacy Scholarship after he passed away in 2011, is a major recruiting tool for UCLA and the UBAA.  Since 2006, the UBAA has raised over $4 million in scholarships.  This program has been so successful in attracting black students that in 2016, UCLA admitted the largest number of African American students in its history with over 400 undergraduate and community college transfers being admitted.

“Most African American students who are admitted to universities across the country come from parents who are middle class, or even slightly above middle class,” Grace said.  “And they don’t qualify for financial aid.  So the $10,000 grant, which is matched by the university and becomes a $40,000 grant, goes a long way to enticing these students to come to UCLA.”

The UBAA, along with other groups, has also performed outreach to middle school and high school black students to ensure that they are qualified to attend UCLA.

“A lot of that is the outreach efforts by students groups, the admission department, and black alumni,” Simmons said.  “So many people have come together to prepare these students, and give them the resources to succeed, so that they can qualify and be admitted.  And we have to continue to raise money to keep them here.”

UCLA has been visible to black students on middle school and high school campuses by attending college and career days.  UCLA has invited students and parents to panel discussions, and UCLA admission officers have met with students at college fairs, such as the Black College Expo.

“We’re also bringing students to campus so that they can be familiar with UCLA,” Simmons said.

Grace points out that the university has become more attractive to black students because there are “more African American facility and administrative staff at UCLA than ever before in its history.”  He said that he believes that having more black administrators has gone a long way toward creating a better climate on campus for black students.

Changes with the admission process has also helped to increase the numbers of black enrollees.

“I think that the university has done a better job of trying to balance its recruitment efforts with the holistic admissions approach that the University of California adopted after 2006,” Grace said.

In this holistic process, applicants are assessed in terms of the full range of their academic and personal achievements, viewed in the context of the opportunities and challenges each has encountered.

“The holistic approach has done a great job in reaching out to excellent students,” Grace said.  “The university is able to recognize students who have challenges and overcome obstacles in their background, and are still able to achieve at a high level.  So we’re getting more first-generation African American students accepted at UCLA.”

Part of the UBAA’s outreach ensures that black students not only qualify for the UC system, but that they are also competitive enough to be accepted to UCLA, which is the most applied to university in the world.  The medium grade point average to be accepted to UCLA is 4.2.  That outreach has to start with students who are at a fairly young age.

“Parents need to know that they must prepare their child much earlier to get on an academic track that would put them in a position to get into a UCLA, or a Berkeley, where the standards (at those two schools) are even higher than the other UC schools because more kids are trying to get into those schools,” Grace said.  “You have to take all of the UC required classes, and you have to be taking the most difficult classes that your school offers.”

Grace said that there have been many upset parents in past years who’s children were accepted into the UC system, but not UCLA or Berkeley.

“In some cases it was directly because those kids didn’t take the most difficult classes at their high school,” he said.  “So when they were matched up against other kids from other schools who had the same school index, they didn’t compare favorably because they weren’t taking the AP history, AP English, or AP math.”

UBAA’s outreach programs, and other programs at UCLA, are designed to ensure that students are on track to attend the university.  The UBAA is going to host an Education 101 workshop toward the end of summer.  UCLA admissions officers will be on hand to discuss the typical student profile  that they look for and the type of high school classes that need to be taken.

The UBAA’s next event will feature UCLA legend Kareem Abdul-Jabbar in a conversation with UCLA basketball champion Tyus Edney.  The UBAA and UCLA African Student Union will host this book signing event on Saturday, May 27, at Pauley Pavilion on the campus of UCLA at 3 p.m.  Introductions for the event will be by ESPN broadcast journalist Cari Champion.  Visit the UBAA’s website to RSVP.