A homeless youth, who is a student at Los Angeles Film School, showcases his work to Janet Denise Kelly, director of Sanctuary of Hope. Photo by Jason Lewis

“Our homeless youth are invisible in plain sight.” 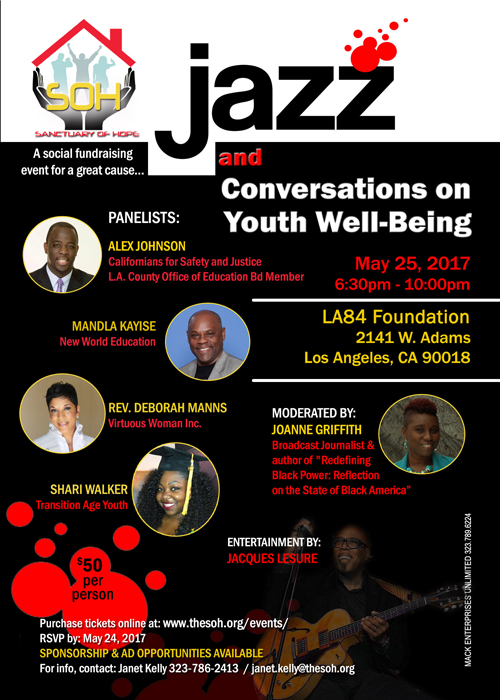 It is nearly impossible to miss the homeless problem in Los Angeles.  Over 48,000 people are either living on the streets or in shelters, and tents line the sidewalks in certain areas.  But what many people may not realize is that nearly 4,000 of the homeless population are under the age of 18, and many of them are living on their own.

“Our homeless youth are invisible in plain sight,” said Janet Denise Kelly, executive director of Sanctuary of Hope.  “Most kids do not want to identify with being homeless.  It’s a really huge stigma.  They’re living in tents, and they’re living in cars.”

Sanctuary of Hope, which is located in West Adams, assists teenagers and young adults ages 16-25 who are in the foster care system, homeless, or are at risk of being homeless.

“The majority of the youth that come through our doors are homeless,” Kelly said.  “They either fled abuse or neglect or they aged out of the foster care system.”

The life of a homeless youth is dire, as they have to use any means necessary to find housing and to ensure that their basic needs are met.  Prostitution is an issue with a lot of the girls who are simply trying to survive, as pimps gain control of their lives.  For the boys, gang life is one way for them to find a place to live and eat.

“With our young boys, if they’re homeless, these gang members are waiting for an opportunity to say, ‘You ain’t got a family, I’ll be your family, I can put a roof over your head, I’ll take care of you,’” Kelly said.

For the homeless youth who avoid being preyed upon, they have to figure out ways to navigate themselves through the daily life of living on the streets.

“For homeless youth, it’s a really big hustle,” Kelly said.  “We have some youth who will rent a car for $15 a day in order to have a safe place to sleep.  It’s better than sleeping on the bench in the park, but it’s more affordable than going to a hotel that’s $90 a night.”

Many of these children know somebody who has a car that can be used as a place to sleep for the night.

“It can be the worst bucket on the street, but it’s a roof over your head,” Kelly said.

The homeless issue has been polarizing, with some people saying that homeless people should not be lazy and that they should get a job.  That point was made numerous times when Measure HHH and Measure H, which will allocate funding to build housing and give services to homeless people, appeared on recent ballots.  But that point does not work with children, who do not have the earning power of an adult.

“L.A. has a less than two percent vacancy rate,” Kelly said.  “That means that it’s supply and demand.  You have a lot of demand, but you have a small supply of housing.  And housing is not affordable to most youth between the ages of 16 to 25.  The average income of a youth and young adult in South L.A. is $5,000 (a year).  So how are they going to be able to compete in not only a very competitive market, but an unaffordable market, if their income is not catching up with the cost of housing?  Most adults can’t afford the cost of housing.  The average two bedroom apartment in South L.A. is about $1,600 a month.  So you can do the math.”

Measure HHH, which passed in November of last year, will allocate approximately $1.2 billion to build 10,000 housing units for the homeless.  Measure H, which passed this past March, created a quarter-cent sales tax.  The funds from that tax will be used for substance abuse treatment, health care, education, job training, transportation, emergency and affordable housing, and other supportive services for homeless children, families, foster youth, veterans, battered women, seniors, disabled individuals, and other homeless adults.

Sanctuary of Hope provides many of those services for children and young adults.  The organization’s headquarters is a housing stabilization center.  Youth can come in during the day to do their homework, meet with academic coaches, use the kitchen to prepare meals, do their laundry, and take a shower.

“We need more facilities that can house youths,” Kelly said.  “It’s not pretty being on the street.  I was texted a picture today of a young person who got beat up on the streets last night.  His face is bloodied and purple.  It’s dangerous for a young person to be on the streets at night.  We need more safe places for youth to go and sleep.  Even if it’s temporary while they are resolving a family issue or if they cannot return to their home environment.”

Mental illness is also a cause for children to become homeless.

“If we don’t find them a place to stay, or try to stabilize them quickly, they will be among the chronically homeless,” Kelly said.

Sanctuary of Hope helps these children meet their basic needs, and they emphasize education.

“We believe that’s one of the greatest assets that any of our youth can acquire because it will keep giving, as far as increasing their earning power and giving them the opportunity to walk through some doors,” Kelly said.  “We’ve had over 30 youth and young adults who have received a degree or vocational certificate.  We’ve seen a lot of successes along the way.”

Sanctuary of Hope has a rapid rehousing program which helps young people get into an apartment.  The organization covers the cost of the security deposit and the first months rent.  Starting with the third month, the financial assistance tiers down over the next 12 months until the tenant can pay for the rent on their own.

While many homeless people do receive financial assistance from the government, those funds may diminish in the near future.

“We know that under this new administration (President Donald Trump), you may not receive any of additional subsidies,” Kelly said.

Community members can assist homeless youth by referring them to the center.  People can also financially support the organization by attending the center’s signature event.  This year’s event is titled “Jazz and Conversation on Youth Well-Being.”

This event, held on May 25 at the LA84 Foundation, 2141 W. Adams, features a jazz performance and discussion panel.

“People are going to be able to listen to the jazz sounds of Jacques Lesure,” Kelly said.  “He’s one of the jazz greats and he’s very well known throughout the country.  People will also will be able to enjoy a stellar panel.  These are all thought leaders not only in youth development, but they are thought leaders in well being.”

To purchase tickets to this event, or for more information about Sanctuary of Hope, visit their website at www.thesoh.org, or contact them at (323) 786-2413.