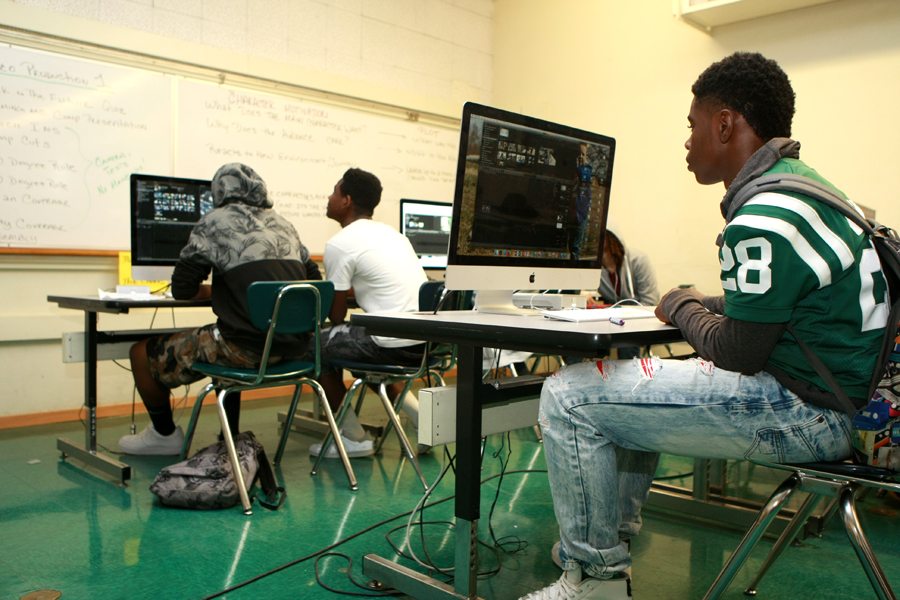 Dorsey students use state of the art equipment and software to learn video production. Photo by Jason Lewis

This program enhances students’ chances for college and employment.

The Career Technical Education (CTE) program at Dorsey High School has a video production department that is preparing students to enter the workforce as film makers, camera operators, and editors.  The program also enhances the students’ chances of being accepted into university film programs.

This three-year program is taught by Robyn Charles, who attended film school at UCLA and is a film professor at UCSD.  CTE classes provide industry-linked programs and services, and are taught by professionals from the industries of the classes that are available.

The students learn film production, camera operating and editing skills, and there is a focus on creating documentaries.  The class uses state of the art equipment and software.

“I pick the equipment that I used in film school myself, or the new generation that was not available to me,” Charles said.  “I try to keep it current and I try not to dumb down the equipment at all, whether it’s the computers or the cameras.”

The students use JVC video cameras and DSLR cameras, and they work on Apple computers.  They use the latest professional software, such as Final Cut Pro, Adobe Premiere, Photoshop, Illustrator, and InDesign.  While the equipment and software are high tech, that is not an issue for the students.

“I anticipate them starting the program knowing nothing (about computers),” Charles said.  “But I’m pleasantly surprised when they do know a little bit.  But to be honest, in this day and age they are pretty tech savvy.  Regardless of how computer savvy they are, they take to it easily.”

This is the second year of the program.  None of the returning students chose the class last year, but they liked it so much that they stayed in the program.  In the near future, the classes will start during a student’s sophomore year.  The freshman year would be used to prep the students for the program, with classes in photography.

Performing well in this class can put a student on track to attend film school in college.  Charles has formed a partnership with USC’s School of Cinematic Arts and their Annenberg School for Communication and Journalism.  This partnership ensures that the Dorsey students are on par with college level film students.

“I’m not teaching these students a high school level film class,” she said.  “I’m teaching them what I learned at UCLA, and what I now teach at UCSD.  The same intro class I teach here is the class I teach there.”

While the goal is to send children to college through this program, students who do not plan on attending college can still greatly benefit from this program.

“The students are able to leave this program as professional videographers and editors, whether they want to work as independent contractors or qualify for a company like FOX Sports, or a different news organization, to be a video journalist.  They can also go into independent documentary making.  It can range from getting a job at BET as an assistant editor, and that’s without a degree, to owning their own production company to do weddings and things of that nature.”

Charles financially supported herself as a professional videographer and editor while she was a graduate student at UCLA, and many of her students can do the same after they complete the program.

“They will have the technical background,” she said.  “They’re being geared for 21st century skills.  They’re meeting the technical expectations of both the workforce and colleges.  They’ll be able to be certified in Adobe, which can make somebody standout in a college application.  And they will obtain a lot of the leadership skills.  There is no way that they can get through these projects without working together.  Leadership is embedded throughout the course.”

The next step for the program is opening a studio for broadcast news, that will have an anchor desk, and it will give the students the ability to broadcast content and web series such as events on campus.

Charles is looking for industry partnerships, whether it is internships, jobs, or shadowing opportunities for her students.

For more information about this program, contact Dorsey High School at 323-298-8400.