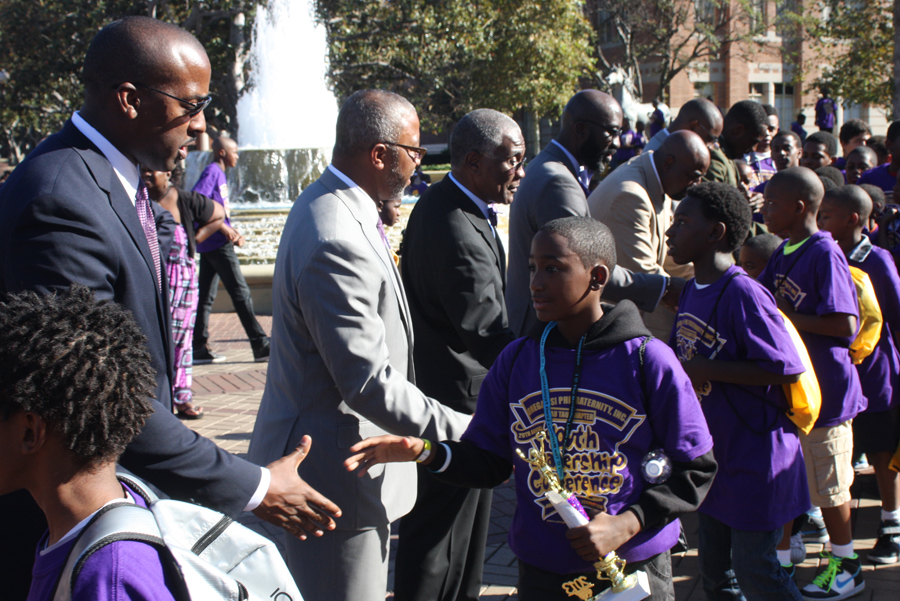 Members of Omega Psi Phi greet the attendees of the conference.

The men of Omega Psi Phi Fraternity, Inc. have mentored more than 6,000 boys in the Los Angeles area since 1993, and they are gearing up for October 29, when they will host the 23rd annual Youth Leadership Conference.  This free event will take place on the campus of USC.

This community service project was created in response to the 1992 Los Angeles Riots.  After witnessing the situation, Ricky Lewis, a member of the fraternity, reached out to fellow members of Tau Tau Chapter to establish a program that would pull together 100 boys to teach them about leadership, manhood and personal responsibility.

“We decided to put together a program to assist young males ages 13-18, to keep them off the streets, and encourage them to take care of their community,” Lewis said.  “We have sessions where we talk to them about personal responsibility, manhood 101, chivalry is not dead, listen to your parents, getting good grades and going off to college.”

Lewis said the program also conducts sessions with parents, where the discussion is about raising young boys.
Initially planned as a one-time event, the program became so successful that the fraternity decided to do it year round.

As this event has grown over the years, the age range of the boys who are being mentored has expanded to include boys as young as eight years old.

“We found out that by the time the 13-year-old boys came to us, they were already pretty much set in their ways,” Lewis said.  “So we had to go back and get the younger boys.”

More than 250 college-educated men from all of the fraternity’s Southern California chapters participate in this program.  Space for this conference is limited, and there is no on site registration.  For more information, visit www.omegaeducationalfoundation.org or find them on Facebook.