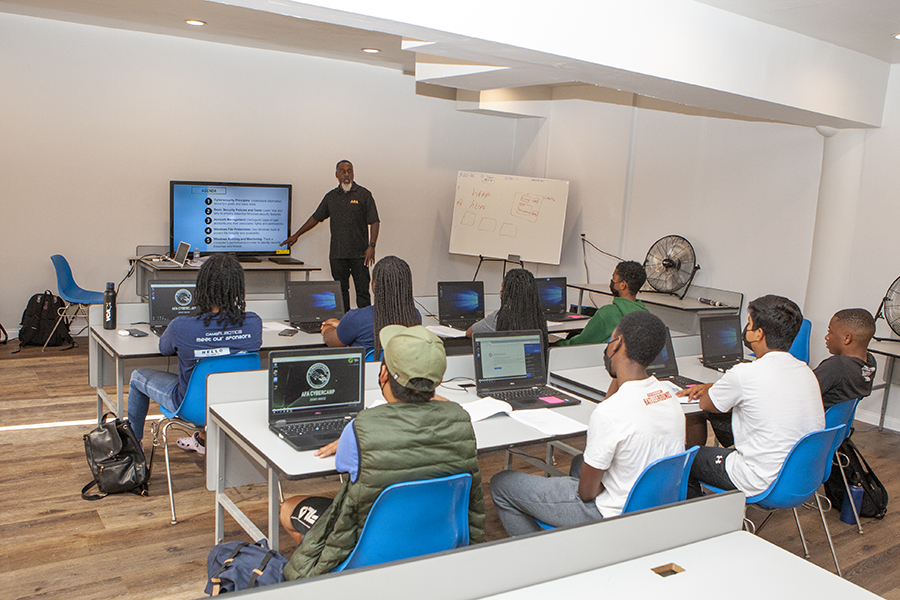 This program provides students with the prerequisite resources needed to excel in STEM majors and professional fields.

The engineering industry is filled with high-paying jobs and it has a very low unemployment rate.  But Black and Brown people are underrepresented.  The Engineer Factory in South Los Angeles is preparing children to take on engineering and other STEM (science, technology, engineering, and mathematics) majors in college.

Since opening in Inglewood in 2016, the Engineer Factory has served more than 9,000 students of color through hands-on workshops.

“The goal is to empower more African American, Latinx, and female students in underserved communities to level the playing field for STEM education,” said founder and Executive Director Audrey Thompson.  “Our goal is to expose our students to engineering in particular.  My husband and I started the program with the hopes of encouraging more students to pursue engineering in the future.”

Thompson’s son was interested in engineering when he was a child, but there were not very many programs for him.  Luckily at Monroe Middle School in Inglewood, there was a MESA (mathematics, engineering, science, achievement) program which was one of the winningest in California.  That program was exactly what Thompson needed to push her son into STEM fields.

“It was challenging for an African American male living in Inglewood to navigate the process to have success in STEM in high school and then ultimately get to college with it,” she said.  “Now I’m the proud mom of a working electrical engineer.”

At the engineering competitions in which Thompson’s son competed, he was typically one of the few Black students.  As he continued to excel academically, many parents would ask her what programs that she put her son in.  Unfortunately, there were not very many in Black communities, so she launched the Engineer Factory to fill the void.  Thompson has taken it upon herself to lead local students to success in these fields.

“They need to have someone to engage them and show them the way in regards to pursuing STEM careers,” she said.  “I’m constantly trying to identify where there are opportunities for students in our community to make sure that their experiences, that they had parity with the experiences that some of my friends that I went to UCLA with, and some of my White friends on the Westside.  Whatever their kids are doing, I wanted to make sure that our kids were doing.”

Thompson points out that one issue is that local schools do not offer certain classes that are prerequisites for STEM majors in college.  She said that less than 14 percent of schools in underserved communities offer AP computer science, which is a subject covered at the Engineer Factory.  Black students who are interested in STEM fields but do not have access to the classes needed typically do not graduate college with degrees in STEM majors.

“A report came out in 2017 that of all of the African American, Latinx, and female students, when they enrolled in college with a STEM major, 65 percent of them changed their major to a non-STEM major within the first two years of college,” Thompson said.  “One of the biggest reasons cited by the students for why they would change the major was their lack of confidence in math.  We started a summer program to start building up math skills for our students because we are addressing the impediments to success for them to go into these high-paying fields.”

Many K-12 students participate in STEM competitions, which are sponsored by corporations such as Jet Propulsion Laboratory (JPL) and The Aerospace Corporation.

Thompson noticed that many of the teams from more affluent communities had professional coaches to prepare their students, and many students from Black communities did not have access to similar resources.  So she’s making sure that the students at the Engineer Factory are prepared to compete at the highest level.

Curtis Carpenter, a senior IT security analyst at Cal Poly Pomona University, has seen a major difference between students who come from more affluent communities and the typical Black students.

“I saw a disparity in the resumes and student skillsets,” Carpenter said.  “The average (Black) student will graduate with retail or fast-food experience.  Many of the (White) students that I was hiring, they would finish school with IT certifications.  They would have advanced skillsets.  Some of them would have internships while in high school and some of them had internships waiting for them in college during the summer.  I was trying to figure out how was it that these students were able to get these advanced skills.  When I talked to them, overwhelmingly the response was that they participated in Cyber Patriot in high school.  Many of these students also used it as a gateway to scholarships or exposure to the top companies in information security or the IT sector because those companies sponsor Cyber Patriot.”

Carpenter created a cybersecurity camp in partnership with his fraternity, Alpha Phi Alpha Fraternity, Inc., Iota Zeta Lambda Chapter; Daniel Tabor, adjunct faculty at Los Angeles Trade Technical College (member of Kappa Alpha Psi Fraternity, Inc.), and the Engineer Factory.  This weeklong camp taught high school students how to secure and reduce cyber risks in vulnerable computer systems.  With the advances in technology, this is a profession that is in great demand.

“We have these Internet of Things (IOT) devices in our homes,” Carpenter said.  “We have Ring doorbells, Alexa, ADT Security.  Anything that you can connect to the Internet, those things are vulnerable.  We have them on the same home networks that we have our computers on that have our taxes.  So it’s not something that only affects a few people or large businesses.  This affects all of us.

“Our world is increasingly becoming dependent on technology and as that happens, there’s going to continue to be a need for more and more qualified cyber professionals.  The unemployment rate for cyber professionals is extremely low, and it pays very well.  Our ultimate goal is to see more African Americans and students of color in information technology or cybersecurity, as well as STEM overall.”

Carpenter is assembling a youth team to enter in cybersecurity competitions, and the Engineer Factory is holding STEM classes throughout the year.  The Engineer Factory is located at 3555 S. Western Avenue.  Contact them at (310) 625-3710.  Visit their website at www.theengineerfactory.org, and follow them on social media.