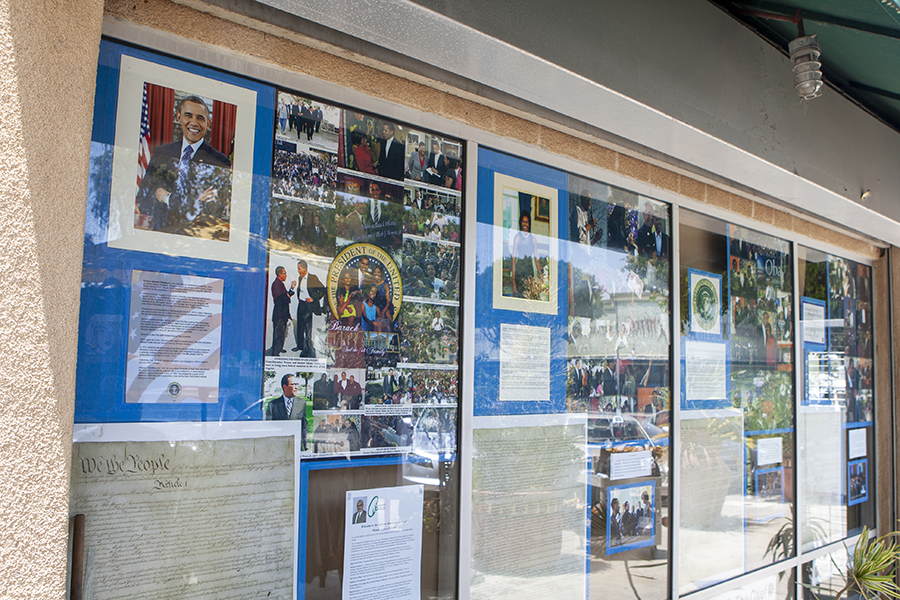 Community Build’s Albert Lord has created an art installation that showcases African-American excellence as well as the struggles that Black people have endured as they fought for equality in the United States.

“This was created to inspire and educate our people as to the history and legacy that we’ve had before today,” Lord said.  “So that we are able to visualize what has been going on in the past.  The struggles that our people have had to endure, and how they have turned hardships into opportunities for advancement.”

Lord is Community Build’s Vice President of Governmental Relations and Arts Program, and he served as L.A. City Council President Emeritus Herb Wesson’s deputy for 16 years.  While working at City Hall, Lord created several exhibits that showcase Black history.  His latest exhibit is a combination of previous exhibits that were displayed at City Hall.

This exhibit features the Emancipation Proclamation and the Freedmen’s Bureau, which shows that many of the issues that were being fought over in the 1860s are still issues today.

“The conversation about voter’s suppression is the dominant conversation in today’s news media,” Lord said.  “In this exhibit, it shows that the conversation existed with the 13th Amendment, the 14th Amendment, and the 15th Amendment.  The 13th Amendment freed our enslaved people, the 14th Amendment gave our enslaved people citizenship, and the 15th Amendment gave men the right to vote.  Right after that was the establishment of the Freedmen’s Bureau, which was a federal organization to train and teach the newly freed people on how to read, how to write, how to conduct business, to help them with legal opportunities; to minimize the opportunity of them sliding back into slavery.  But it was also to educate them about their power to vote.  And to give them an opportunity to effectively change the quality of their life.

“It’s important for our community today to know that the dialogue that we have today is a dialogue that we’ve been having since the very beginning.  This has been a long-standing struggle that still exists today”

“It was a huge event,” Lord said.  “What was interesting is that he chose the Crenshaw community to acknowledge to the rest of the world that he was running for president.  That decision was not taken lightly.  He had to understand that there was a base that would support him in his run for presidency, and that base was Black people.  Leimert Park, Crenshaw, it’s a Black community.  So it was a very structured and politicized move to recognize him as a candidate for presidency.”

This exhibit coincides with the Juneteenth celebrations.

“‘From Where We Come’” is the part of the African American Heritage Month exhibit that serves as a reminder of what we are entitled to as U.S. citizens.” said Community Build President Robert Sausedo.  “As people read the words of the Emancipation Proclamation on display, I hope they are reminded of the first Juneteenth in 1865.  Over 150 years later, we still must hold those in power accountable to what is not only our legal right, but our birthright.”

This exhibit is a self-guided tour, and group tours can be scheduled with Lord by contacting Community Build, which is located at 4305 Degnan Boulevard in Leimert Park.  The exhibit will be on display through the end of July.  For more information, visit www.communitybuildinc.org