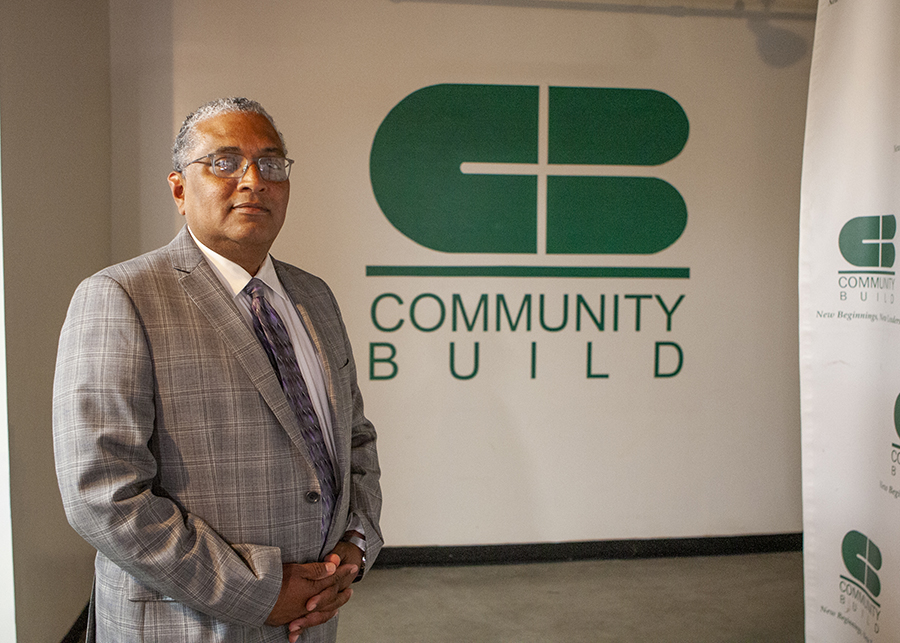 Sausedo, who grew up in Jefferson Park and Arlington Heights, uses his sales and marketing background to raise funds for Community Build’s programs.

Robert Sausedo has a long track record of increasing corporate revenue, and now he is using those skills to fund programs that create jobs, address the homelessness problem, steer children away from gangs, and feed people who are in need of groceries, among many other things.

Sausedo serves Black communities around areas where he grew up.  He spent his childhood in Jefferson Park and Arlington Heights, and he attended St. Pauls Catholic School on Washington Boulevard, just east of Crenshaw Boulevard.  He started his business career selling copiers for Sharp Corporation, and when he took two of Xerox Corporation’s largest accounts, Xerox recruited him.

“I thought that if I went to Xerox, put that on my record, that’s like Apple today,” he said.  “If you have that on your resume, that will carry you for a long time.”

During the 1990s, Sausedo did very well in the clinical laboratory business.

Sausedo was later recruited into the energy efficiency business, where he helped build Johnson Controls’ Los Angeles market to producing $100 million a year.

“What you know as going green or energy efficiency, we were already doing that before it became popular,” he said.  “One of my flagship projects was the City of Compton.  I wanted to make sure that Compton was one of the first Black cities to go green.  Out of all of the thousands of cities across America, American City and County Magazine does an annual award for eight cities, and we were able to get Compton, in 2016, the Local Government Award.  We did about $4-5 million of capital improvements throughout the city.”

Sausedo owned an insurance agency, and along with his wife they owned a health care consulting firm.  He then went on to serve as Deputy for Agency Review and Support for then Los Angeles County Supervisor Mark Ridley-Thomas.

“I did a lot of community engagement, working closely with our development team,” Sausedo said.  “The project that they’re looking to build at Vermont and Manchester; the site with the 180 units, mixed use, and a transportational boarding school that Metro is participating in, I was a part of that team to help get the community on board with that.”

In 2019, he was asked to take on the role of president and CEO of Community Build, which was created in 1992 after the civil unrest to provide education, training, employment placement and support services to former gang members and other at-risk young people.

“Brenda Shockley, who is the founding president, did a phenomenal job of building a great chassis for me to build from,” Sausedo said.  “If you know anything about cars, if you can find an old car with a good chassis, you’re in good shape.  When I came in, there was 27-year old legacy of an African-American organization that had solid bones, deep roots, and had done a lot of great work over the years.  So here I come, with Community Build 2.0, positioning it for the next 25 years.  Since I’ve been here, we’ve been able to do a lot.  I’ve doubled our revenues and our programming in the last two years.  We’ve grown immensely.  We’ve been able to provide direct employment between October of 2020 through the end of December to about 600 people through several different programs.  In addition to that, we helped the city with their programs, so in total we helped 2,700 people find jobs during the COVID crisis”

During the early stages of the COVID-19 pandemic, Sausedo co-founded the Community Response System of South Los Angeles (CRSSLA).  This group of community organizations and community leaders have given out more than 20 million pounds of food, thousands of personal protective equipment, over 2,000 computer tablets to students, and they have provided tutoring as children are attending school virtually.

“We’re sort of like the Red Cross of Urban America,” he said.  “In a recent conversation that I had with the Red Cross, they recognized that they are not as robust in urban communities as they’d like to be.  So we’re talking about a way to leverage what we’ve built for them to operate on this platform.”

Community Build was the first organization to open a Measure HHH (funds for construction to house the homeless) funded permanent supportive housing.  The housing is at the intersection of Vermont Boulevard and 88th Street.  The site has 62 units of permanent housing that supports homeless veterans, homeless families and individuals, and transitional youth.  The site also has a youth center and mental health services.  Sausedo plans to create more housing in the near future.

“We’re merging another organization into Community Build, which will allow us to pick up an additional $3 million in assets in terms of real estate,” he said.  “We’ll be looking to build about 90 to 100 units of additional permanent housing.  We are definitely becoming a player in the housing development market.”

“When you’re very government-contract centric, you run the risk of being out of business if the politics don’t rule in your favor,” he said.  “There are things that we can actually fund ourselves.”

Community Build is moving to form its own community development financial institution to support local small businesses, and it is working on creating a first time home buyers’ program.  Some of Community Build’s programs serve as fundraisers.

“One thing that I share with the employees here is as you develop programs, always think of ways that we can productize what we do,” Sausedo said.  “Because at some point that can become a social enterprise.  My lens that I look through isn’t just a lens of programs or just helping people.  It’s how do I take what we’re doing today and scale it in a way that it becomes a business that can funds us.”

Community Build has job placement and creation programs.  They recently hired 40 seniors who were looking to re-enter the workforce during the COVID-19 pandemic, and they hosted a job fair where 33 people were hired at the event by four companies.

During the early stages of the pandemic, Community Build hired 200 people to be census workers, and a county grant allowed them to put 300 people on their direct payroll.

Community Build partnered with Dads Back Academy to hire 88 re-entry individuals as community health workers.  The program is designed to decrease the prison recidivism rate by giving the formally incarcerated options that lead them away from committed crimes once they are free.

Community Build’s efforts has been recognized by some major publications.  Recently they were nominated as the Nonprofit and Corporate Citizen of the Year by the Los Angeles Business Journal.  Also nominated was CRSSLA in their first year in existence.