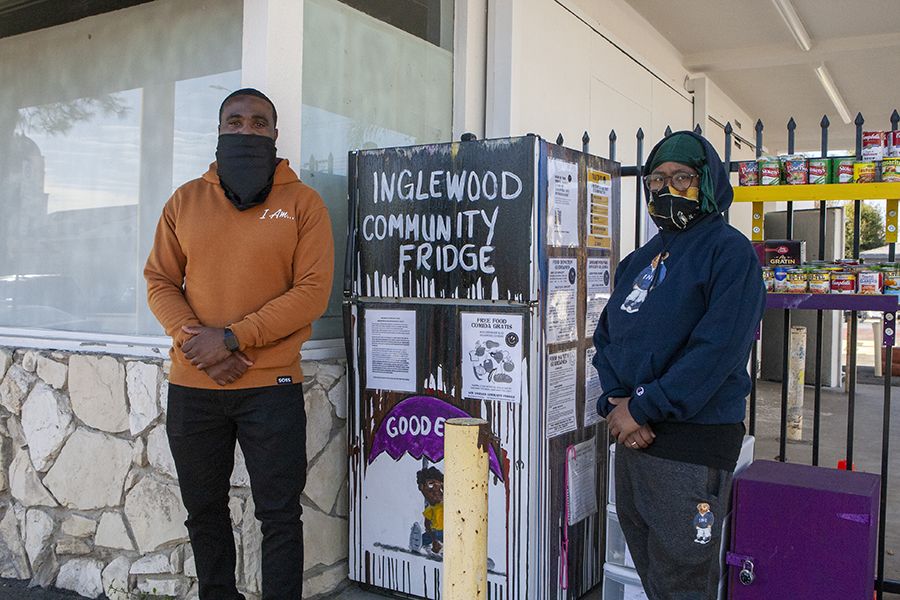 Vernon Yancy (left) and Juice Wood created the Inglewood Community Fridge, which is at the Crenshaw Dairy Mart.

Community fridges are now wide spread around Los Angeles County.  There are over 15 fridges and counting, with fridges in Leimert Park, Inglewood, Compton, Hawthorne, Chinatown, and North Hollywood just to name a few.

The L.A. Community Fridges organization started with one community fridge in July of 2020, and the movement has grown tremendously since then.  Community fridges allow the locals to essentially stock and donate items for people who need it.  People are encouraged to drop off frozen foods, produce, nonperishables, canned goods, and beverages.  But people should not drop off home-made meals.

This type of giving creates not only a sense of security but a sense of privacy for those who may be in a vulnerable position.  Those in need essentially benefit from the kindness of strangers anonymously with the grab-and-go format.  Most food banks ask for names, number of people in the households, and they are often regulated.  In contrast, a community fridge is open 24/7 and does not require any documentation from anyone who needs a quick bite or drink of water.

Juice Wood and Vernon Yancy, founders of the Inglewood fridge (located at the Crenshaw Dairy Mart Art Center, 8629 Crenshaw Boulevard), explained that “our city is still a city that is on the move so even our vulnerable champions just need to pull up and go where they're going.”

Most people just want to quickly grab what they need and go, so on the go foods go the fastest.

During the holiday season, a collaboration between the Inglewood, Leimert Park, and Compton fridges created A Very Merry Fridgemas.  The Leimert Park fridge is adjacent to Hot and Cool Cafe, located at 4331 Degnan Boulevard.

This collaboration was designed to give back to each community a little bit more.  The event was divided into three days beginning December 19 in Leimert Park,  December 20 in Inglewood, and December 21 in Compton.  Each event hosted a different giveaway to cater to their individual community’s needs.  The Leimert Park Fridge provided free HIV testing, groceries, hygiene kits, pet food, toys, and even vegan health options.  They partnered with various organizations and restaurants such as Soul 222 Soul, Water Drop LA, Deity Animal Rescue, The Concierge Kitchen, AIDS Healthcare Foundation, and Hot and Cool Cafe.

The Inglewood fridge hosted by The Crenshaw Dairy Mart held their give away at Darby Park.  They provided hygiene kits, groceries, toys and vegan meals.  They partnered with Hot and Cool Cafe, Water Drop LA, Soul 222 Soul, Summaeverythang, Check In, The Homiez Collective, VegainzLa, and OMO Cares.

The Compton portion of A Very Merry Fridgemas was not connected to a community fridge due to the city mandating that it be shut down.  Kani Webb of Peace of Mind, explained that the fridge had been causing some conflict with the fire department, which was concerned with the fridge not having a latch.  Webb stated, “We got an actual letter from code enforcement stating that the fridge is going against the Compton guidelines by having abandoned furniture and the fridge, left out on the street.  They also said it was a liability to have an extension cord running outside.”

Despite the Mayor of Compton, Aja Brown, trying to help out, there was no true solution for the fridge.  That did not stop Compton and local organizations from giving back to the community.  Since last fall, Peace of Mind has collaborated often with other groups to feed families.  For their giveaway they partnered with Miss Roger’s Neighborhood, Water Drop LA, Soul 222 Soul, and 213 Ramen.

Blue, a Compton community member stated she came out because, “It was one of the few times vegan and healthy food options were provided to the community for free.”

The health of the community is important to each organizer, as they stress that during their giveaways, as well as to the community which donates to the fridges.  Webb explained that Compton itself is practically a food desert yet it has tons of fast food options.

“With people wanting to change their lifestyle and diet they should have the resources to do so,” Webb said.

Vernon Yancy of Inglewood’s fridge also explained that it is important for the community to know that they have support, and people who care about their communities.

If you would like to start a community fridge in your own neighborhood, send a message to @LACommunityFridges on Instagram.  To connect with the Leimert Park fridge follow them on Instagram @leimertparkfridge;  Inglewood’s fridge @Inglewoodcommunityfridge; and Peace of Mind @peaceofmindcpt.